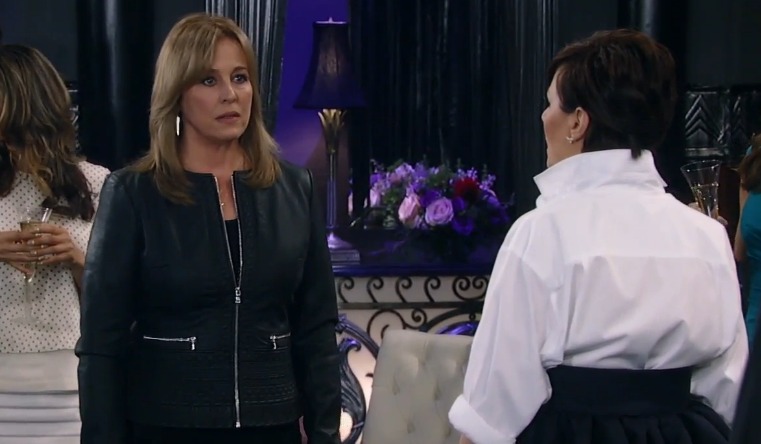 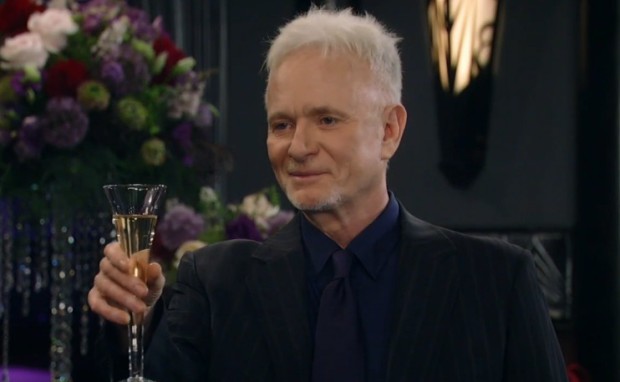 So Luke is back in conciliatory mode. Should we believe him, GH? He’s been given a clean bill of health and has talked Tracy into a trial engagement. Hmm. I know there’s a big exit planned as Tony Geary leaves. Jonathan Jackson is coming back as Lucky, and even Ethan will be stopping by. The engagement party seemed a little odd, but then, boom, in walked Laura as the closer to this week. Genie Francis looked good. She couldn’t want Luke back, could she?

I did love seeing Lucy – and she apparently has another Sigmund! Loved that touch. And it was nice to see Luke reconnect with Alice. I’m still suspicious – and I don’t blame Lulu for sweeping the boat for bombs!

Anna has packed her bags and left Port Chuck to sprinkle Duke’s ashes in Scotland. Her goodbye with Luke was lovely. Also heading out of town is Olivia, to be with Baby No Name. It will be fun when they reappear, because I know they will.

Speaking of people magically reappearing, Dillon has shown up with a new face, ready to watch over Tracy and perhaps reconnect with Lulu. Since Dante is still handsy with the new PD assistant, Valerie, who knows what could happen. Also happening at the PD is the new commish, Jordan. After half her life undercover, she can now sit in an office and tell people what to do. I like her in this role, and it will be fun to see what happens.

But Denise? No, I’m not enjoying Denise. GH, I get that you needed to walk us through the bone marrow transplant so Silas had to explain it to Denise, but that was so stupid since he knew it was her. Clearly, Ava couldn’t stay away from her family; I get it. Why not get a new face, though? How long can Ava keep up the annoying accent? And why can’t she come clean to Kiki and Julian? Doesn’t she trust them? Delia can be trusted but not them? Silas is stuck in a bad place, having to keep his mouth shut. Is he going to reconnect with Nina? Is that why they met up at the Haunted Star? That could be interesting for sure.

The engagement party for Brad and Lucas was a little weird. Scotty and Sonny were there but not Lulu or any of the Jeromes. We’re still waiting to hear what’s up with Brad’s family. I always love it when Carly has curly hair, and she looked great.

Nina is in a bit of a pickle. Ric was working with her mother, Madeleine, to get her money. But now Ric is double-crossing Madeleine by marrying Nina. Franco and Nathan are determined to get her out of the marriage. Their little scheme didn’t work this week, but I’m sure it won’t stop there. Meanwhile Nina has sold off Franco’s ELQ shares to Nikolas, even though Michael was trying to buy them. Whew. I can hardly keep up.

Michael and Morgan have reconnected as brothers, which was nice, but must every dispute be settled in the boxing ring? What is this, The Bachelorette?

Let’s chat about accents, GH. Suddenly there are none! Anna and Duke are gone. Mac is never on screen, and he hardly has an Aussie accent. Jax, Jerry, Robert, Carlos are all gone. The only one we have left is Dr. Obrecht. There’s no one else left with an accent! Maybe it’s time for something fun. English and Australian are fine, but maybe something more exotic would spice things up. How about a Southern accent? Or a Japanese accent? Indian? Anything really would be fun.

Wardrobe highlights and lowlights all come from Nina this week. That floral halter dress she had on at the beginning of the week was so cute. The hoochie-mama hooker dress she wore to the PD was awful.