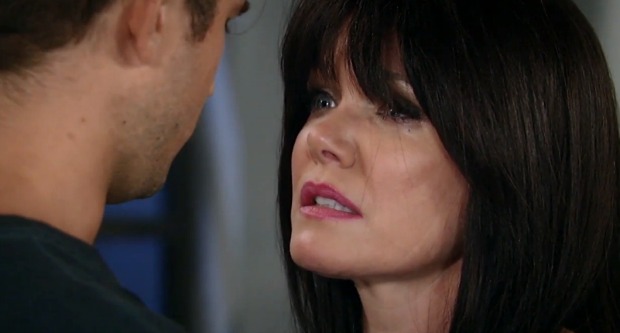 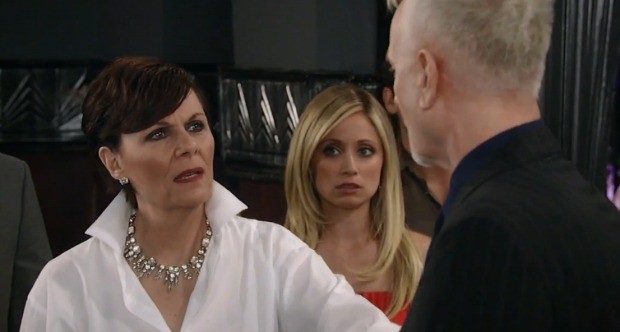 Things are heating up with the ELQ shares. Nikolas has hired Sloane, and Michael has hired Jake, each tasked with getting shares. I expect we will see them go head to head on this. But Jake in a suit? Jason was allergic to suits, so that one is a stretch. Dillon’s in town so his shares will be at play for sure (and Nik implied he may use Lulu to get them – that’s a bit manipulative). This is definitely a fun storyline – better than mob wars all the time!

Sam is investigating Rosalie for Sabrina, so she hightailed it over to ELQ to put a tap on Rosalie’s desk phone. Only Sam visits a corporate office in leggings and a tube top. It looks like Jake had an inkling she was up to something too. Now that they’re investigating the same thing, their paths will cross and sparks are sure to fly.

Nina sold Franco’s shares to Rosalie who gave them to Nikolas, but Nina thinks she sold them to Michael. Rosalie’s going to get caught, and now that Sam is on the case, she should just surrender. I’m not sure how Nikolas thought no one would realize what happened. Speaking of Rosalie, GH, could you get her a pair of heels that don’t squeak? Every scene she’s in, she sounds like a duck when she walks or stands.

Rosalie vs. Sabrina is our latest girl fight. I’m surprised Sabrina didn’t slug her when Rosalie called her a hooker. Girl fights are great, but we could sure use some more girl friendships. Maxie and Lulu are really it. Speaking of which, Sabrina, the nanny who wears heels, was consoling Tracy after Luke dumped her. I don’t know if Tracy is really up for having a friend, but this could be promising.

Franco’s upset that Nina took his shares and now he and Madeline, her mother, may team up to get Nina to annul her marriage to Ric. Madeline is conveniently back in town with her case dropped. Franco and Dr. O are always funny together. Her obsession with him is so odd.

Nina glomming onto Molly was hysterical (“Call me mom.”). And Nina and Sam playing off each other was well done also. I always wonder how many of Nina’s actions are pure crazy and how many are calculated. It keeps me guessing. Seeing her and Silas together was interesting. Maybe they will reconnect? Silas has definitely proven himself to be a bit unpredictable. Perhaps the two can bond over their baby-knapping skills.

I loved it when Ava went to visit AJ at the Q’s. That was heart wrenching – seeing her hold her own baby but unable to claim her. I’m sure it will all come out somehow. Maybe Ava will get herself hired by the Q’s to be closer to the baby. Ava’s make-out session with Morgan was a surprise. I guess they’re not over each other. Kiki’s doomed to have her heart broken again. She always looks sad anyhow, so we might not be able to tell.

Luke and Laura are the big news: back together, but it’s a lie. Luke called off the engagement to Tracy for an as yet unknown reason. It looks to me like someone is in danger (Lucky? Ethan?) and somehow they have to pretend to be together to save them. Poor Tracy. She can’t catch a break. Jane Elliott played those scenes eloquently. It’s cruel to Luke and Laura fans to do this to us again. The last time they supposedly got back together, it was to give Laura some happy last days before she slipped into a permanent catatonic state. There was a huge wedding that turned out to be fake. At least we know it’s fake up front this time. 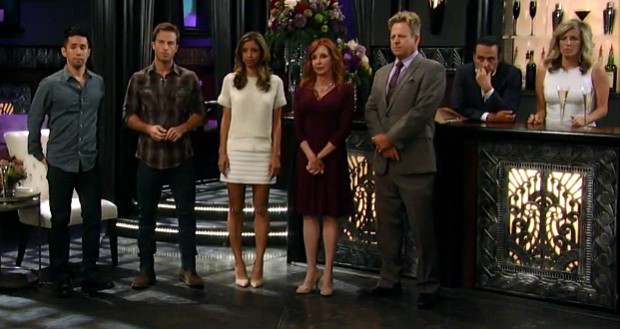 Apparently for our “ripped from the headlines” story, we’re going with racial discrimination. TJ was arrested for shoving a mall cop. What didn’t make sense was why they were detaining him. If his card was stolen, that would have shown up right away. This is all a little hard to believe. It’s always fun to hear Wyndham’s mentioned, though. And Valerie is climbing aboard this one, conveniently hitting Dante when he is feeling the worst. All snark aside, I am happy to see an important social issue being discussed, and with at least a tiny bit of nuance.

Liz is in a panic that Jake will remember who he is. First he dreams of Danny and then he goes to work for the Qs and is stuck on a photo of Monica and Danny (a faceless baby in that photo, which was kind of hysterical). I’m not sure why Liz is having a crisis of confidence about her decision to keep his identity from him now. And when did Jake move in with her? Last I knew she sent him packing off to the hotel because it would be too confusing for Cam and the invisible Aiden to see him, but now he’s making eggs in the morning.

This week, I’m stuck on the fact that Nikolas’s living room has one wall of modern art (Picasso-style) and one wall of traditional English hunt club scenes. It’s better than gargoyles, I guess, but it’s a bit odd.

Nina’s been wearing the best clothes lately. Having cash is agreeing with her. I also liked Jordan’s white jacket, but it looked far too warm for June in upstate New York. My losing outfit of the week was Lulu’s mullet dress with the giant belt at the Haunted Star. It just swallowed her up.

Things are heating up with Luke and Laura and also with ELQ (it was nice of Laura to remind us she worked for Edward back in the day). Next week should be fun for sure!

Thoughts on this week’s GH? Sound off in the comments below!