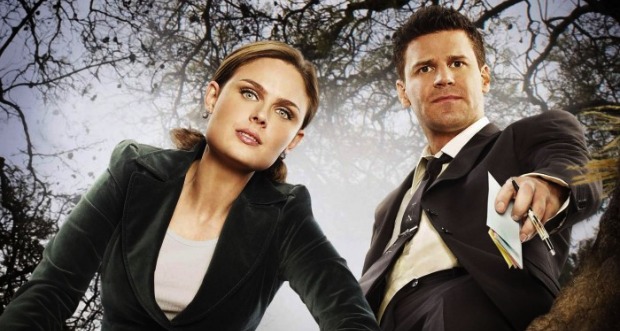 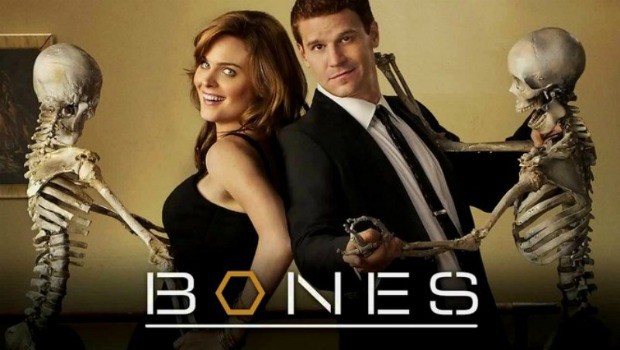 I’m writing this on Throwback Thursday, thus the old picture of our dynamic duo, Booth and Brennan. Ah, the good ole days. Weren’t they cute?!

It’s crazy to think that our little show “Bones” has made it through ten seasons, and now renewed for an eleventh! Time sure flies, doesn’t it?

Tonight’s finale is what I’d call a little bit of a let down. I say that only because there has always been some huge stomach-turning cliff-hanger (usually having to do with Booth and Brennan’s relationship on the line), but this finale seemed a little anti-climatic. Did you think so?

Yes, I know B & B are supposedly leaving, but with Angela and Hodgins now staying, I can’t see the two main characters going elsewhere. I’m guessing there will be something on that tape (Pelant) that brings them back – you know, the tape Angela started to play for Brennan.

The case was interesting because Pelant (or his spirit) was part of it. His protege tried to keep his evilness alive, and I’m sure that Pelant’s presence will linger in the first couple of episodes next Fall. Whatever the storyline will be, it’s going to have to be big enough for Booth and Brennan to want to – or need to – come back to the Jeffersonian. They are the best at their jobs, right?!

As always, it was fun having a lot of the cast back for the finale. I was wondering if they would ever have Daisy back; they did. She, Wendell and Clark were challenged by Brennan. She reminded them that she had trained them for this, and they didn’t let her down.

Angela had a big surprise for Hodgins – big! She found the money! His money – 4 billion dollars! I forgot how rich he was, but more amazing was that Hodgins tells Angie to get rid of it. What? Get rid of it? At first she couldn’t believe it. Neither could I, but that’s Hodgins, isn’t it? He wants to use it to help people. He’s such a good guy and an even more wonderful husband. He was going to leave the job he loves so Angela could finally get her dream – to live in Paris. She has always wanted that. Maybe she will finally get there when Bones really ends. I hope she does.

Cam didn’t have a very big part in the finale. Early in the season, I’d heard a rumor that there was going to be another wedding. I thought it was going to be Cam and Arastoo. Dang, no wedding. Maybe next season? I would like that. Cam deserves to be happy and get married. Maybe they could have a Middle Eastern-style wedding. I would love a great episode for Cam. She has been a solid character and one we’ve all grown to love. She keeps things professional, but also has a deep affection for her staff, or shall I say, friends. Way to go, boss!

Aubrey has been a great addition. He’s a good partner for Booth. He’s funny, smart and also not afraid to be upfront and honest. As we saw in this episode, Booth respects and trusts him. He’s different than Sweets, but in a positive way – and I love his love for food!

I love Caroline. I just love her. She was not happy when Booth told her the case they were working on was going to be his last. Her tough exterior is just for the bad guys, and her emotions came out as she cried about Booth leaving. She has always been such a fun character. Remember back in the day when she told Brennan she would Max a trailer if she kissed Booth?  Ha ha – that was such a cute scene. In real life Emily, was  really embarrassed to kiss David. Let me show you the clip.

I’ve been reminiscing about the “Bones” of yesteryear. I loved the early seasons, especially 1, 2 and 3. I also really liked seasons 4 and 5. It seemed to change a little in season 6 and then 7 through 10 had a different feel. I think the main difference is Brennan and how her character has changed. She was gritty with a rawness, yet had an innocence to her.

Her relationship with Booth had such chemistry – of course, before they got together. I think they’re still great together, but I think the writing for their characters is different, too. Emily (and I do adore her) started delivering the lines in a more technical way. There are so many fluctuations in her voice now (it seemed to start a few years ago) that it makes the character seem different.

Look back at some of the earliest episodes, A Man on Death Row, The Man Fallout Shelter, Two Bodies in a Lab, The Girl in the Graft, Aliens in a Spaceship, or The Santa in the Slush. You’ll see and hear the difference. I loved those older episodes. I’m not saying I don’t like the newer ones, but Brennan was at her best back in the early years.

What are your thoughts about the earlier seasons vs. the later seasons of “Bones”? Can you see a difference? What do you think about Brennan then and now? Do you like how the show has evolved? Do you think season 11 will be the last?

Sound off in the comments below. I’d love to hear your thoughts!