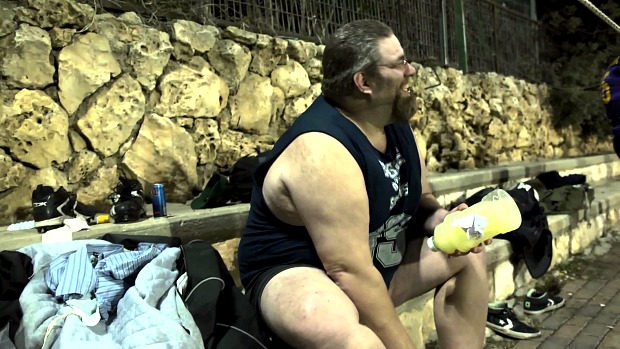 The Los Angeles Jewish Film Festival kicked off April 30 and runs until May 7. If you’re lucky enough to be attending this festival, which began almost a decade ago, there are so many great films to see, including the rags to riches story of the Outrageous Sophie Tucker and the inspirational sports documentary Touchdown Israel.

Touchdown Israel is, honestly, one of the best sports documentaries I’ve ever watched.

Who knew? It’s probably the question you’ll ask yourself too, just like documentary filmmaker Paul Hirschberger asked himself when he read about the Israeli Football League five years ago in The New York Times.

“I thought, ‘no way they are playing football there,’ but that story wouldn’t let me go, so I contacted Steve Leibowitz, president of the Israeli Football League,” he explains. “He told me about the guys who would play tackle football in parks without any gear. They came to him asking to create a league and that’s how it was formed.”

Within five years, the league grew from four teams to 10 teams and 500 players and, thanks to the involvement of the New England Patriots’ owner Robert Kraft, the league also has a stadium. The inspiring film takes you on the journey of the meaning of football to the Israeli nation and the drive these players have to be the best. There are no endorsements, no multimillion dollar contracts. Simply put, they just play and coach for the love of the game.

“It was a leap of faith and very difficult to get funding for this film,” says Hirschberger.  “I had to ask myself if it was a project that I wanted to throw myself into. I thought about it and knew it would be difficult to raise money and fund it myself, but hopefully on the backend it would at least cover the expense of making the film.”

Hirschberger did as much research as he could and then hopped a plane to Israel to learn whatever he could about the league. This lead to his documentary, “Touchdown Israel.” You can hear the rest of the interview with Paul on Sports Palooza Radio. The film debuts at the Laemmle’s Town Center on Sunday, May 3.

The film follows several of the players, including Yonah Mishah, the coach of the Jerusalem Lions, the first IFL champs. “Since then they’ve been fighting to win another Israel bowl,” he says. “He was such an interesting person to cover. He grew up in an Orthodox family and he couldn’t play because of the Sabbath, but he knew that football was his game.”

The film shows how peace among Jews, Christians, Muslims and those with stark differences can simply come together over love of the game. In addition to these great films, there will be a special appearance on the closing night, May 7, by Israeli writer/director and show creator, Gideon Raff, who will screen two episodes from “Prisoners of War” his Israeli series that spawned Showtime’s “Homeland.”

Check out the full film lineup at www.lajfilmfest.org.