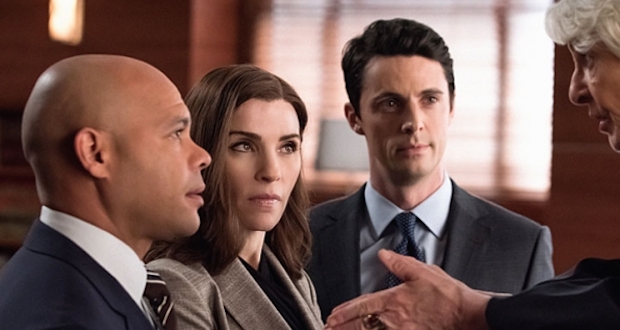 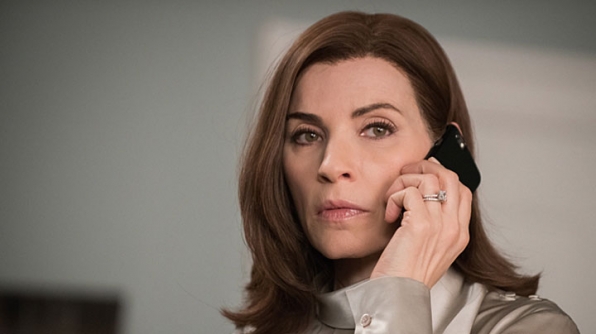 Well good-wifers, it’s the end of a somewhat rough sixth season of “The Good Wife.” A lot has happened this year, and it’s time to tie up some loose ends while setting up for the new season to come. And after lots of suspense from last week’s teasing about who’s behind Alicia’s door, we finally find out, and it’s about as shocking as they promised.

But of course, her door opens several times in this exciting season finale. The first time is while Peter and Eli are visiting to make a big announcement: Peter’s been asked by the Illinois Democratic Committee to run for president. He wants to see if he’d be a viable candidate for vice president, but he wants his family’s approval first. Alicia initially gives her blessing—only to renege later over concerns that Grace will blame herself when the bid doesn’t work out. She tells him she doesn’t want him to run.

After Peter and Eli leave, there’s another knock on the door. This time, it’s Charles Lester (the always-entertaining Wallace Shawn), Lemond Bishop’s shady, questionable lawyer from season 4. Problem is, not only does Alicia not want to talk to him, but she’s busy trying to protect a client who’s in trouble: Jacob Rickter (Seth Gilliam).

Alicia answers her phone to hear Jacob scuffling with police in what sounds like an arrest, but when she calls the holding cell, they say he’s not there. After some investigation with help from Jacob’s wife (Sharon Leal), Alicia finds that Jacob was taken to a hidden police facility called Homan Square, notorious for mistreating arrestees that they think no one cares about. Finn, familiar with the place, agrees to help Alicia, and based on Alicia’s query last week, tells Alicia he wants to partner with her in their new firm.

Well that’s exciting! There’s lots of time for flirtation and palpable tension as Alicia and Finn work on this case together—even though Finn tries to shut any romance down. He tells Alicia he’s been dating his ex-wife, and they’re trying to make a go of it, because he doesn’t like failing. The two try to ignore the obvious attraction between them, but by the end, Finn realizes that it won’t work, and he turns down the partnership with Alicia. Bummer.

Of course, they have to win their first case first. They go up against Matan again, but they’re working with a wonderfully sympathetic judge (Jane Alexander)—a good thing, too, because the officers at Homan Square are fighting them at every turn. Eventually the officers allow Jacob to go to court, but then try to arrest him based on a confession. With help from a young, nervous officer who works at Homan Square, Finn and Alicia eventually prove that Jacob was taken unfairly, not read his rights, and coerced into confessing, so the judge is forced to throw out the confession and set Jacob free. Hooray, day saved.

Now that that’s out of the way, Alicia—and Cary and Diane—also has to deal with Lester. He’s looking for Kalinda. Bishop, who’s still in jail awaiting trial, is apparently very interested to know where Kalinda is (as are we all). Alicia knows not to give him any information, and so does Cary when Lester shows up at the Lockhart-Agos-Lee offices. They leave Lester to fend for himself.

Speaking of the LAL offices, they apparently have a new hire: a Ms. Simone Rauschenbush (Susan Misner); aka: Louis Canning’s wife! She used her maiden name because she wanted to get the job on her own. Wha? How did that happen? Wouldn’t the three named partners have some say in the hiring process? Anyway, the lawyers decide it’s too risky for Canning’s wife to be an employee, so they let her go. She’s devastated. Canning later comes into Diane’s office, livid, and vows to tear the firm apart.

The ever-mysterious Kalinda confronts Lester at the grocery store. That was easy. She promises to meet Bishop the next day, but then doesn’t show up. When Lester threatens her again, she shares that she has a jump drive with information on him that she decided not to share with the state’s attorney’s office…yet. He agrees to leave her and her friends alone, as long as she refuses to come back, and he’ll just tell Bishop that he couldn’t find her. He also asks her if she wants to go into business with him (do I smell a spinoff?) but she refuses. Dang. That could have been entertaining.

Before she disappears for good, Kalinda surprises Alicia at the bar for one last drink. She tells Alicia that the note she left her was her confession and is meant to clear Alicia of any wrongdoing. She also tells her she’s sorry about everything that happened, and stresses how important their friendship is to her. They finally have an official goodbye. It’s quite bittersweet.

When Lester shows up at Alicia’s door again, she invites him in, and pulls out Kalinda’s letter. But instead of giving it to him, she burns it, in front of him, telling him she just didn’t want him to have it.

He leaves, and there’s another knock on the door. It’s Finn, explaining that they can’t ignore the tension anymore and it’s better not to work together. When he leaves, she berates herself for doing something so stupid—until there’s another knock on the door. She’s excited by the idea that Finn has returned, but no, it’s not Finn. It’s Louis Canning, asking Alicia if she wants to partner with him.

Whoa! So that’s definitely a twist I didn’t see coming. Canning’s been after Alicia for years and clearly wants to work with her, but this certainly seems like a way to try to tear apart LAL. Will he tell Alicia that’s his plan, or just use her to achieve it? Or does he actually want to work with her? We’ll have to wait until the fall to find out.

So what did you think good-wifers? How was this season finale for you? Did you like Kalinda’s final goodbye? Are you sad that Finn shut down any possible romance (so far)? What do you think will happen in the fall? And how will you survive without “The Good Wife” until then?