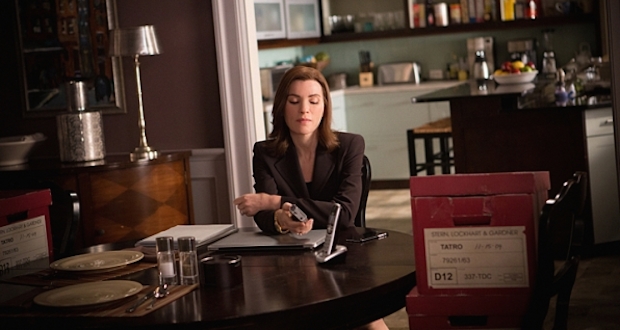 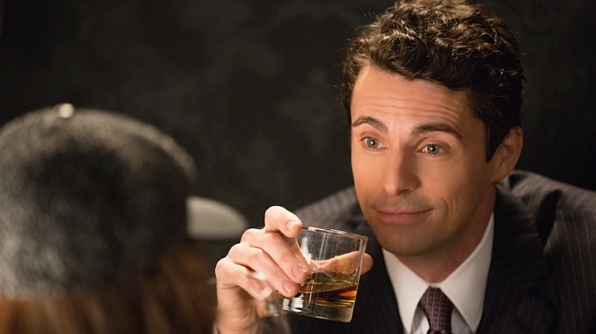 So good-wifers, it’s an interesting new episode of “The Good Wife,” as we get back to basics: trying a case in court. Perhaps taking a page from Serial, the fascinating, popular podcast that captured everyone’s attention last fall, this episode focuses on one pre-trial motion rehashing a case from six years ago. No political races, no silly email scandals, not even a secondary storyline. It’s pared down and simplified, and I like it.

Since being forced to withdraw as state’s attorney, Alicia’s at a loss for what to do next. She fields annoying phone calls from telemarketers while meeting with a ghost writer for her memoir, but doesn’t want to discuss Will Gardner yet (not that I blame her). Those calls make me nuts, but Alicia handles them the same way I do: refuse politely, but if they won’t accept your no, hang up on them.

Alicia’s also lonely, despite all the activity on her phone, and hopes to get family time with Grace, but Grace is on her way out (cue: Cat’s in the Cradle). But a package from Eli tells her to call and thank her campaign donors.

As Alicia works through the list, one of the people she calls is not a donor, but a client. One of Alicia’s first cases after she started at Lockhart Gardner was an attempted murder charge against Brett Tatro (Dorian Missick), who allegedly beat up a man in a strip club parking lot and put him into a coma. The victim recovered from the coma, but has now died from his injuries (I’d like a little more information on this, like how long was he in the coma and when did he wake up, but we’ll let it go). Tatro is charged again, this time with first-degree murder.

Alicia’s hesitant to take the case after all she’s been through, instead going incognito through her activities and telling Finn (yay Finn!) that she’s suffering a crisis of confidence. Finn tells her to think of the client rather than herself, and reminds her that there’s no better way to move on than to take the case. Just make sure you don’t fail. (Of course she won’t.)

Alicia gets boxes of material on the first trial from Cary, who worked on it with her when they were rivals at LG. As she’s listening to the tapes, we go back through her new ancient history in flashbacks, hearing them through the scratchy tapes. These bring back crystal clear memories from Alicia, which fill in some of the gaps missing in the cassettes. It’s a bit surprising that she remembers particulars so well, but again, we’ll let that go.

Just like in that ancient history, Alicia once again opposes Matan Brody (Chris Butler). Alicia assists Tatro’s current lawyer, the young, feisty, but nervous Amber Audrey (Aya Cash), who is having a little trouble standing up to Matan’s steamrolling persona. She clearly has potential, and gets in a few zingers during the case, but she’s very green. Fortunately, Alicia helps her out.

The team goes through various steps in the case: first, fighting to keep the previous testimony (Matan wants it thrown out), because of the alibi provided by a dancer who has since passed away. Turns out that the dancer was a drug addict and Tatro was her dealer, and her alibi is a lie. So while Tatro may have been innocent in the attempted murder, he was guilty of other infractions.

But not all looks good for the prosecution, either. Matan introduces a witness who says he saw Tatro beating up the victim, but they had told him they didn’t need his testimony in the first trial. Dejected, Alicia leans on Finn, and he tells her a secret: a detective he knew while he was ASA had a habit of misusing photo lineups to get the result he wanted—but you didn’t hear it from me. Naturally, it’s the same detective. Alicia questions the detective about his misuse of photo arrays, but the judge also forces her to reveal where she got the information. After “conferring with counsel” overnight (in the form of memories of Kalinda), Alicia reveals that Kalinda told her about the detective. Matan doesn’t believe her because it’s so convenient that Kalinda is nowhere to be found, but she did answer the question, so the judge is forced to take her at her word. He ultimately decides to dismiss the case, and Tatro is again free.

Ah Kalinda. She may not be around anymore, but her ghost still is. Cary thinks he sees her around the office, and Alicia remembers her in her flashbacks. It’s sad, particularly when the pair commiserate over how Kalinda was never one for goodbyes.

With this new case under her belt and her crisis of confidence lessened, Alicia decides to start her own firm—and invites Finn to join her. While that’s exciting, I’d think it would prevent any sort of romance between the pair. But the preview for next week’s season finale hints at something. I guess we shall have to see. But while Alicia and Grace turn Zach’s room into her office (already? he’s barely finished his first year of college), and talk about Grace serving an internship as Alicia’s assistant, Zach calls, saying he wants to come home, tomorrow. Hmm. . .

– Has Alicia always been bombarded with such annoying phone calls? Or have they gotten worse since she ran for SA? It’s encouraging to know the “Do Not Call” list doesn’t work for important people like former state’s attorney candidates anymore than it does for me.

– I wonder why Alicia tells the young lawyer she doesn’t want to learn from her. I think she’d be a great mentor.

– Both the witness (six years ago) and the young lawyer’s mom compliment Alicia for standing by Peter during his scandal. Interesting that people still seem to focus on her role as wife, not everything she’s done since then.

– How did Jackie and Zach get access to that recording they taped over? It seems very unlikely. I guess we just needed to be reminded of Zach’s existence.

– I wonder if there’s something mysterious about the long delay when Zach calls. More likely they were just trying to create suspense.

So what do you think, good-wifers? Why is Zach coming home already, and just how early is it? Do you think Finn will join Alicia in her new practice, and if so, would that mean the end for any possible romance? What did you think of this back to basics episode? Are you looking forward to next week’s season finale? Who’s behind Alicia’s door, and will we have to wait the whole finale to find out? Chime in below.