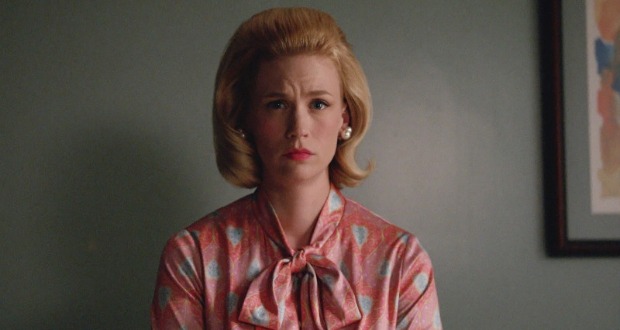 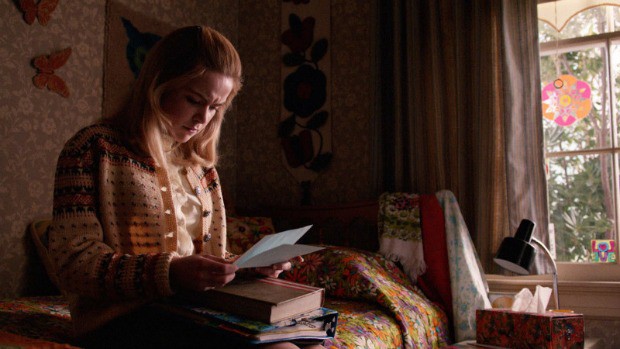 One of the “Mad Men” episodes I watched before the final seven episodes began airing on April 5 was “The Fog,” the fifth episode in the third season. It’s the one where Betty gives birth to Gene, a whoopsie if ever there was one, conceived in Betty’s childhood home when Don and she were visiting, even though they were separated at the time, because her father’s health was starting to slip.

And gosh, did I love this portrayal of childbirth, perhaps the best I’ve ever seen in a movie or on television. The aloneness of being wheeled to the delivery room, turning around to say good-bye to Don and he’s not there, the hallucinatory afterbirth, complete with her walking down the street in Ossining in a slow-motion parade of one.

Betty Draper, now Francis, has always been a complicated mother, at turns icy, volatile, lashing, restrained and yes sometimes even loving. Not often loving, but still. Remember when Sally got her period? And whatever Betty’s ambivalence towards motherhood, rooted in whatever damage her hyper-critical never-satisfied exacting mother caused her, she was a mother. So for this episode, the one where we learned that Betty has less than a year to live, to air on Mother’s Day, well it heightened the audience response.

I for one had been sad during the day about my own mother, who’s slipped into the fog of dementia. I was actively missing how much fun it was to watch a movie or a TV show together. She would have loved “Mad Men.” Her show was “The Fugitive,” and I remember thinking my mother had gone off the deep end when that show’s finale aired in 1967. The thing of it, my mother could always, and I mean always, predict what was going to happen next. I wonder if she would have seen what was coming with Betty.

As best I can tell, the vast majority of the viewing audience didn’t. I thought we were either done with deaths, or that if a character was going to die, it was going to be either Roger or Pete. There, I thought chances were high that Pete would get killed in some freak accident involving mass transportation, a bus or a train, given his family legacy of dying in airplane crashes and cruise-ship overboards.

But Betty? Oh no. The surprise of surprises. A surprise the builds that dramatic tension for the finale and Don’s trajectory in perhaps the most intense way humanly and creatively possible. The three children are losing their mother. And their father is on some bizarre cross-country trek, propelled by a whim and a fancy and a stolen identity.

Betty’s final story line elevates her as a character more than anyone else’s sendoff could, including Don’s, unless we’re in for some colossally shocking outcome on his part, which I doubt. After seasons of being on the margins, with some viewers and recappers wondering if she even belonged in the show, the writers made us appreciate the importance of this woman to Don Draper, the almostness of domestic certainty, if not bliss. Of all Don Draper’s women, Betty and Don had the most scintillating chemistry. And if you think about it, they are alike in many ways. She is, despite the veneer of a good family and a Seven Sisters education, as damaged as Don, proof positive that class doesn’t exempt anyone from the ravages of misdirected parenting.

Betty’s response to her diagnosis rings true on so many levels. The impulse to retain a sense of normalcy, cooking dinner as if nothing was wrong, and wondered what she was going to tell the children. Her fury when Henry showed up with Sally, at the expense of poor Sally, made sense as well. Her directive to Sally, telling her that things happen quickly when people die, and that Sally must be in charge, because Henry will fall apart, yes, this is in line with her emotional state. She’s surrounded by people but she’s alone, as alone as she was when she was marching down the street in Ossining in Gene’s afterbirth hallucination. Her letter, which Sally wasn’t supposed to read until after Betty was gone, is perfect-pitch narcissist and pep coach. Yes, Sally’s life will be an adventure.

We will probably not see Betty in this show again. We definitely won’t see Trudy. Alison Brie blabbed as much in an interview today! Will we see Pete? Who knows. I love that Duck is back, that rascal of an alcoholic, conniving Pete into a job interview with an executive from LearJet. LearJet is a perfect match for Pete. That it’s based in Wichita is rich. After Manhattan and L.A., why not? As much as I think that Pete and Trudy make an exquisite couple – any couple that can dance the way they danced in “My Old Kentucky Home” should be together in my eyes – I did feel that Pete’s reconstituted ardor was rather sudden, despite signs that things could move in that direction in the episode where they visit Greenwich Day. You know when an ex-husband tells an ex-wife she’s ageless there’s always a chance for a reconciliation. This one came a bit too suddenly. But I’ll take it.

There’s one word for Don Draper: stuck. Make that three. Stucker than stuck. Here he is again, running away — but towards what? We know what he’s running away from. But what’s his destination? The man is no longer young, why can’t he figure life out? Isn’t he bored at this middle-of-nowhere hotel, even if he is reading Mario Puzo’s “The Godfather.” (Which he wrote because he needed the money!)

And why does he stay for the fundraiser? It is agonizing, it makes so little sense. Until you get to the moment where Don confesses that he killed his commanding officer in Viet Nam. He’s been carrying that around for going on 20 years. I’m pretty certain he didn’t divulge the accidental death to anyone. He glossed over that with Betty and Faye and Megan. Even if he did, confessing as much to fellow veterans must have felt cathartic in some form.

Now with Betty’s death-knell prognosis, everyone’s wondering how it will fit into his outcome. Even if Betty weren’t dying, wouldn’t he want to stay on the East Coast for the sake of the children? I know he talked about summers in L.A. before he ended up not joining Megan on the West Coast. But still. I would be beyond surprised if he ended up dropping his Don Draper identity and assuming another or retake his identify of origin, Dick Whitman.

Some people think the hotel grafter is going to crash Don’s Cadillac and people are going to think Don is dead and Don is going to assume a third identity. Really? I think he’s going back to New York, maybe even back to McCann. But I’m ready for anything, I always have been. In just a few days, we’ll know.

I’d like to dedicate this recap to my dear friend and neighbor Bethann Thornburgh, who was diagnosed with lung cancer the week before Christmas 2002 and passed away several weeks before Labor Day 2003. She would have loved “Mad Men,” for more reasons I can share.