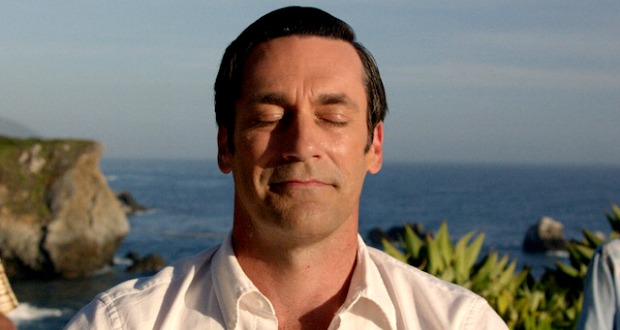 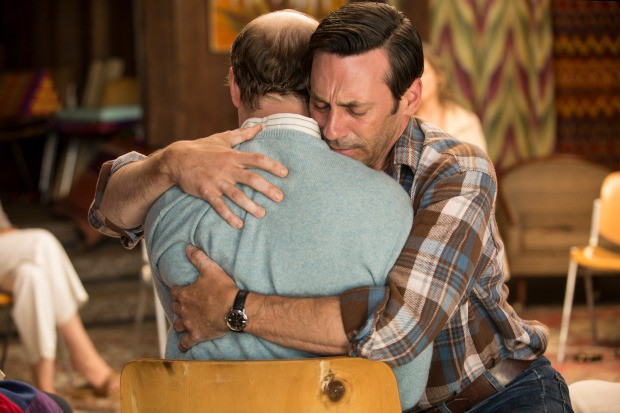 In the hours leading up to Sunday’s airing of Mad Men’s finale, someone tweeted that they’d read that the show filmed in Big Sur, California, last year. I remembered reading that, and realized that Big Sur must figure in the finale, since we hadn’t seen anything remotely resembling the place in these episodes. So, was that how “Mad Men” was going to end? Was Big Sur a nod to Jack Kerouac’s autobiographical novel by the same name, a novel that describes the nervous breakdown he had while living in Big Sur, and if so, was Don Draper going to have one? There had been references to “On the Road” in the penultimate episode. Or could there be a scene on Pfeiffer Beach, where Burt Lancaster and Deborah Kerr kiss most famously on the beach in “From Here to Eternity?”

Neither turned out to be true. By now you no doubt know how “Mad Men” ends. (And if you don’t, stop reading right now.) Don Draper has an emotional breakthrough in a group therapy session at a place that is not named but is definitely Esalen, the spiritual retreat. In morning meditation, the Pacific in the background, Don smiles as he chants “om” and the show cuts to a well-known 1971 Coca-Cola ad with the jingle, “I’d Like to Teach the World to Sing.” The consensus interpretation is that Don Draper has the idea for the ad, and there returns to McCann to his professional home. (Matthew Weiner confirmed as much Wednesday evening at a discussion at the New York Public Library.) This is precisely the ending I wanted, Don Draper accepting that he was an ad man, Don Draper going back to New York City. I am also assuming that he has a large role in his children’s lives once Betty dies, that the boys do not ending up living with her brother and his wife.

But how we got to this point is complicated. Matthew Weiner has more than once said that it’s not what happens in his show, but how it happens. And I’m wild about some of the creative choices he made here. I thought it made sense that Don looked up Stephanie, Anna Draper’s niece. But there was a self-consciousness to the group therapy and then meditation scenes, much of it hanging on the foreignness of the setting. It was an incredible departure for the show tonally and stylistically. And that ad. I remember when it came out, and my friends and I thinking it was corny at the time. It reminded us of Up, Up with People. (We were into The Doors.) But I was 13. What did I know? That’s what I love about “Mad Men.” It made you think, it challenged your assumptions.

There were some intensely acted moments in this episode, most involving phone calls. Don calling Betty after Sally tells him that her mother is dying of lung cancer. They’re both emotionally connected, and Don drinks himself blackout drunk after their conversation. Don calling Peggy and talking like someone who is on the verge of suicide. It was a literal cliffhanger, this. There are cliffs at this location! Betty not wanting Don to return to take care of the children made as much sense as it didn’t, if that makes sense. On one hand, he wasn’t exactly an involved father, even though it’s obvious he loves the children to bits. On the other hand, rebuffing his offer felt insensitive, even if Betty’s reasons were sound. The children needed normalcy and a woman in their lives (her brother William’s wife.)

Joan was amazing in this episode, an entrepreneur unleashed, with the idea of a creating her own production company after Ken approaches her in a jam. The script someone’s provided for an industrial film is a yawn. How terrific, scripts always were Joan’s forte. She offers Peggy a position as partner but Peggy wisely remains at McCann. When Richard realizes Joan is starting her own business, he leaves. As disappointed as the audience might be on some levels for Joan – can’t she have a career and a man – his departure makes sense given where he is in his life. He wanted to build a life with Joan, not around Joan. But dang, I thought she might have it all! She hit the jackpot with Roger telling her that he is leaving a good chunk of his estate to their son Kevin and to his grandson, since Margaret’s out of the picture.

I love that Roger marries Marie. The scene of the two of them in the café was perfect. (I wasn’t clear if it was Paris or Montreal.) As was the scene of Pete and Trudy and their daughter boarding a Learjet for Wichita. I was never wild about the possibility that Peggy and Stan get together. And they did! I suppose I should be happy for them, as much as anyone can be happy for characters in a television show, but I was hoping Peggy would go off to Paris with that handsome fellow she had dinner with several episodes ago. That was not to be!

Every “Mad Men” fan I know is having a variation of the same experience, disoriented that a show that was about the passage of time as much as anything else has ended. “Mad Men” time has stopped. So much of the post-airing discussion has been about the ending, and people are somewhat divided. Not on the magnitude of the end of “The Sopranos.” But still. I for one felt let down. Endings are tough. Truman Capote was so challenged by them, he ended up resorting to fiction to wrap up his non-fiction masterpiece, “In Cold Blood.” Lots of movies, some great, some highly entertaining, have endings that don’t sit well with me. “Rosemary’s Baby” and “Thelma and Louise” are two examples.

And my disappointment goes beyond the ending. It also touches on shared sensibilities. For 91 episodes, and listening to goodness knows how many Matthew Weiner interviews, seeing him introduce “The Apartment” at the Museum of the Moving Image and then seeing him on a panel, with cast members Jon Hamm, John Slattery, Christina Hendricks and January Jones, the next evening at the New York Film Society at Lincoln Center, I felt we shared sensibilities. A clue that we might not was the promo with the Paul Anka song. Yikes! Again, I remember not liking it when this came out. And I’m not cynical. I am often the corniest person in the room.

So, it’s done. And I’m sad. I love the show, I love Matthew Weiner’s mind, I just didn’t love every aspect of how he ended the series. But I love how it ended, if that makes sense. And that, I think, is what counts.