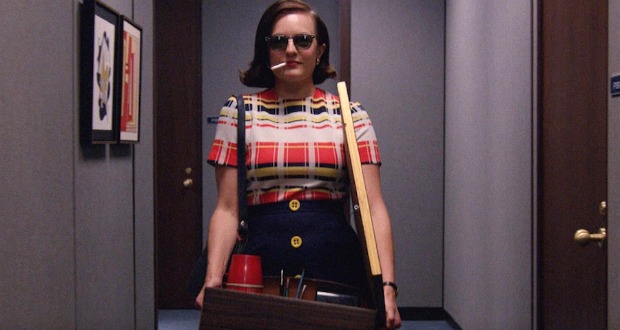 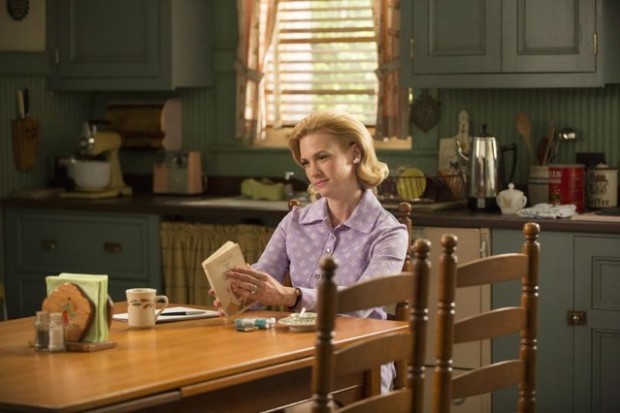 So this is how “Mad Men” ends: Disjointedly, self-consciously, sweetly, absurdly, wondrously. The show is slowly unfolding itself into the finale, and along the way, as well as playing the “how will it end” game, we’re beginning to ask, “Is this the last scene with Don and Betty? Don and Roger? Don and Joan?” And sometimes it seems a bit too much.

Let’s start with Joan. “Lost Horizon” was her episode. She is disrespected by a male colleague at McCann, her transition partner as it were, who didn’t bother to read the client briefs Joan had stayed up all night to write. He suggests golf to their contact at Avon, a man who happens to be in a wheelchair. Joan is livid. She complains to Ferg, who reassigns the colleague and volunteers to work with Joan. He is all about the come-on, despite the wedding ring. He suggests a trip to Atlanta, to smooth over any insults, and Joan put him off, noting that he’ll be in New York soon. Then he gives her a box of chocolates. She thinks they’re from Richard, but the card is effectively an order, “Pick a weekend.” Joan doesn’t need this crap. Her backstory, her one-night stand with Jaguar Dealer Man, was altogether different from the hostile work environment she’s experiencing at McCann. She was in control, she negotiated the terms – this is how she got her partnership – and she gave the impression that she felt superior in her revulsion of Herb. Plus, he was a client, and she was not on the account, so she didn’t have ongoing relations with him, even if his presence at the office was vexing.

Not that it was commendable. But she was on her own then, and now there’s Richard. Which made me wonder one thing: Why didn’t she use the old trick and tell Ferg something anything about a fiancé? So what if she isn’t engaged. Fictitious boyfriends, fiancés and even husbands have been protecting women from lecherous sorts for eons. Since we don’t have benefit of Joan’s interior monologue, it is possible that she chose not to play that card for legitimate reasons, like she didn’t want her romantic status to matter at the office or take the risk of any mentions of a fiancé getting back to Richard, as farfetched as that might have been. And it also might have been that she subconsciously wanted out – that she felt McCann wasn’t going to work and/or she wanted to spend time with Richard. 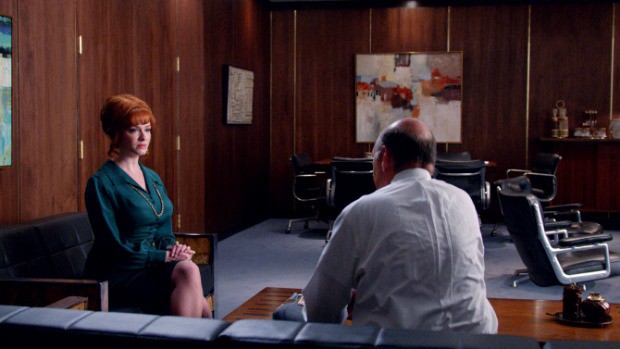 So, perhaps inspired by current events, including a sit-in at Ladies Home Journal and a march led by Betty Friedan down Fifth Avenue, both in the name of workplace rights, Joan meets with Jim Hobart. It doesn’t go well. She threatens to take legal action. He asks her to leave. She ends up being bought out at 50 cents on the dollar, so she’s getting $250,000 instead of a half million, which in today’s dollars is $1.5 million. Roger convinces her to take it, that’s the best she can do. She takes her Rolodex and a framed photograph of her son Kevin off her desk, and pouf, she’s gone.

Speaking of Roger: Who on this planet could have guessed that the last scenes at SC&P would involve Roger Sterling playing an organ – an organ of all instruments! – and Peggy Olson roller skating around the office. Drunk on Vermouth, because all the good liquor was packed up. What a series of moments, two characters who never interacted much are suddenly tossed together by circumstance and inclination, Peggy is hanging out at the office because her new office at McCann isn’t ready and Roger lingering in grief over the loss of the firm founded by his father. 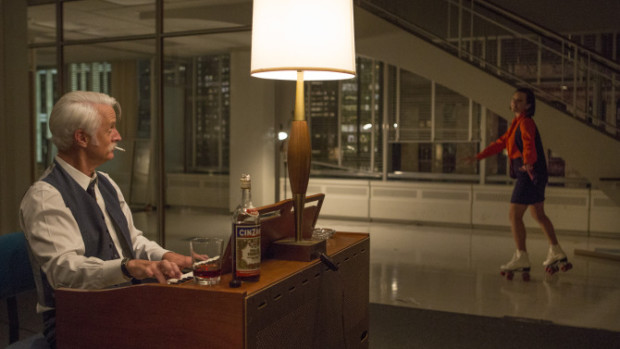 Now, Don. There is less surprise in his storyline, but what a strange road trip it literally turns out to be. Meredith is helping him get settled in his new office, and gives him a small envelope that contains a Social Security card and Anna Draper’s wedding ring, which of course was also Megan’s wedding ring. So of course the audience is thinking it’s a sign that he’s going to go away and assume his genuine identity. Or get married again. The wheels won’t stop spinning. There’s a problem with his office window, you can hear the wind, but this feels like a total wink, wink on the part of the writers (for this episode, Matthew Weiner and Semi Chellis) for all the people thinking that Don might jump out a window like the falling man in the opening credits. I don’t think so! Don meets with Jim Hobart who tells him he is his white whale. He ticks off a bunch of meetings that Don will be attending, including one for a new diet beer. “Call it Tub,” Don deadpans.

The meeting, it turns out, has perhaps 20 creatives listening to a head of research with their unopened white box lunches and pens poised to take notes on blank notepads. The pitch is pretty good, something that you could see Don delivering. Only he’s not. Don looks out the window, sees a plane and gets up. He goes to the Francis home, as he is supposed to take Sally back to boarding school in Connecticut. But she’s left already, and the message didn’t get to him. Betty is reading Freud’s “Dora: An Analysis Of A Case of Hysteria”; she’s started school herself, and in an impossibly sweet scene, Don rubs her shoulders, a gesture of unbroken intimacy that’s more companionate than sexual, and asks about the boys, who won’t be home until 6:30 because of baseball and Boy Scouts. Don leaves, telling Birdie to knock them dead. Betty is happy. She seems at peace. She’s got a new purpose, her studies. The children are independent, she’s in graduate school, something she always wanted to do. Betty Draper, now Betty Francis, is happy. And that is great.

Don heads back to New York and instead of taking a left, takes a right towards New Jersey and Pennsylvania. The next thing you know, the radio says it’s Cleveland. Bert Cooper makes an appearance, riding shot gun and telling Don things like he loves playing the stranger. Don ends up going to Diana’s house, telling her ex-husband’s new wife that Diana’s won a prize. Her husband comes home, and he’s skeptical and Don apologizes for his first ruse and says he’s actually a debt collector. It turns out Don’s not the first man who’s come visiting. He calls Diana a tornado who leaves men her trail. Don looks at him and says, “But she seems so lost.” (It’s Miller Lite, if you didn’t already guess or know.)

He drives on, in some flat land reminiscent of “North by Northwest,” and picks up a hitchhiker who’s going to St. Paul. It’s out of Don’s way, but Don says he can take him there. And we get David Bowie’s “Space Oddity.” Brilliant.

Oh, and Peggy. She gets to McCann, sauced, in shades, the coolest arrival this agency has probably ever seen.

The “Mad Men” Reddit has some great threads around this episode, including one that points out that this half-season’s promotional poster with Don in his Cadillac is from this episode. Can you spot the differences?