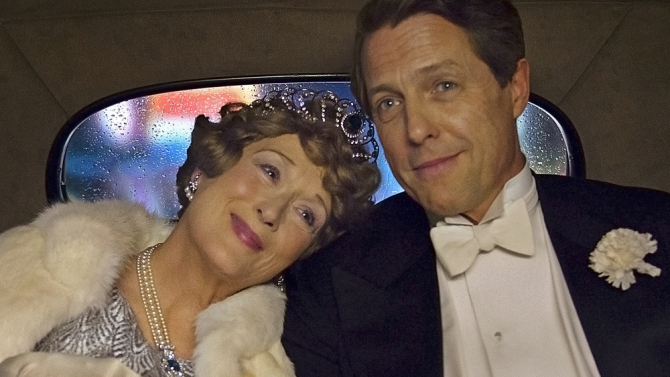 I’ve been lamenting that we haven’t seen enough of Hugh Grant on the big screen lately (he “retired” a while back, didn’t he?). Anyway, that makes this first image from Pathe’s “Florence Foster Jenkins” that much sweeter. The still depicts Streep as Florence Foster Jenkins with Grant as her partner St. Clair Bayfield.

The film follows the true story of the New York heiress and socialite who obsessively pursued her dream of becoming a great opera singer. The voice she heard in her head was beautiful, but to everyone else it was hilariously awful. Her “husband” and manager, St. Clair Bayfield, an aristocratic English actor, was determined to protect his beloved Florence from the truth. But when Florence decided to give a public concert at Carnegie Hall in 1944, St. Clair knew he faced his greatest challenge.

“Florence Foster Jenkins” is directed by Stephen Frears from a screenplay by Nicholas Martin. The cast also includes Simon Helberg, Rebecca Ferguson and Nina Arianda. The film is produced by Michael Kuhn for Qwerty Films and by Tracey Seaward in her seventh collaboration with Frears. It is executive produced by Pathe’s Cameron McCracken, BBC Films’ Christine Langan and Qwerty’s Malcolm Ritchie.

The film is a Pathe and BBC Films presentation with the participation of Canal Plus and Cine Plus of a Qwerty Films Production. Pathe will distribute the film in the U.K. and France, and will handle sales throughout the rest of the world.

No U.S. release date has been announced yet.