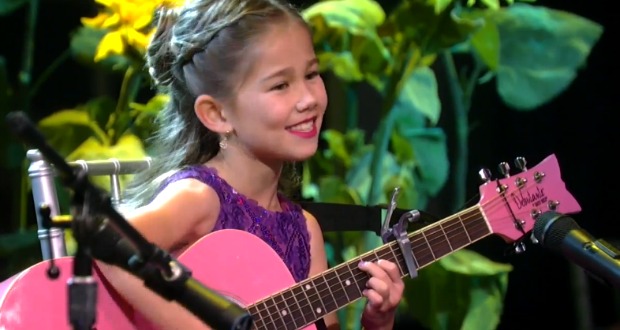 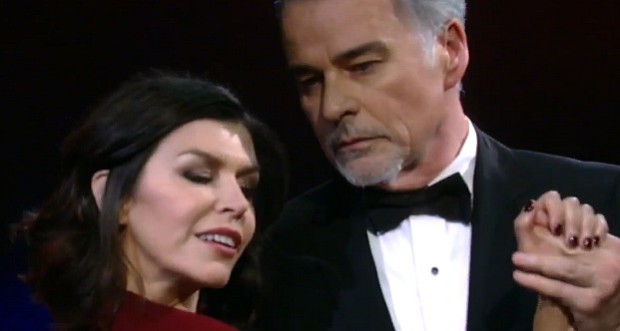 Thanks for such a great Nurses’ Ball, GH! I enjoyed it. My fave moment was Patrick and Emma signing together. Jason Thompson (Patrick) actually wrote this song and it’s up on iTunes for purchase. It was just so cute. Little Emma was just about swallowed up by that big pink guitar. It was lovely.

The other numbers were fun, too, especially the Haunted Starlets and Magic Milo (a tradition). Spinelli singing to Maxie was sweet but sad. There was the traditional Duke and Anna tango, except it was mostly Duke standing still and Anna using him as a stripper pole. We got Lucy in her underwear, so we can check that box. And we got the new traditional “You’re Not Alone” closer. All the songs are available to watch online here.

There was the required mention of Robin at the Ball, check. Even though I’m laughing a bit at all the things that have to happen, I actually really love tradition for things like this and appreciate that it is being preserved. It’s nice to know that some things stay the same.

I didn’t even mind the Aveeno plugs, but what I really want to know is, does this faux fundraiser actually raise any money for HIV/AIDS, GH?  I wish there could be more than approximately five people in the audience. Missing from the Ball: Silas and Sonny.

Ric was totally busted by Carly, which was ok because his song was a little rough. I’ll be interested to see what happens with Ric next or if he just disappears for a while. I’m liking him being on the same team with Sonny.

The Spencer/Phantom of the Ball thing was a little silly. How did Spencer have time to rig all that up? I’m not a fan of this one. I loved his scene with Courtney, who was the fan choice for the character to bring back. Between Britt and Courtney, hopefully he will pull himself together now. And we won’t have to look at that awful plastic mask.

Let’s chat about Nikolas. I don’t understand why he wants ELQ. He doesn’t need the money and he never used to be a mean-spirited guy. It’s kind of odd. I did love his bow tie for the ball – it was just super cute and different. Hayden immediately threw herself at Nikolas after her fake marriage was revealed and has moved in, holding his secret over his head. Nik is one busy dude with Hayden, Valerie, and Rosalie all in his house or in his orbit. I might be mad at him, but it’s still fun to see it all unwind.

I was shocked that Nik spilled the beans to Elizabeth and then a little stunned when she couldn’t do the reveal about Jake. That was an interesting turn for her to be selfish. Thanks for the unexpected, GH. I’ll be watching to see how this plays out. I know it can’t go well, GH. She wasted no time taking Jake/Jason to bed in what was possibly the smallest bedroom I’ve ever seen. But then, he managed to get caught with a gun in his hands and he’s off to jail.

Sam was unable to keep her secret and told Julian that Olivia was having his baby. And then of course, Olivia predictably went into labor. She’s only five months pregnant, so it sounds like bad news for that mob baby. I was surprised this secret came out so quickly. Now that Olivia’s given birth, we have to restart the “No character has been pregnant for 0 days countdown.” Who will be preggers next? Tough call, but maybe Hayden or Elizabeth. Maybe you could do something different, GH, and have someone have quads or maybe do a genetically engineered baby? Lulu and Dante still have an embryo on ice. Maybe it’s time to thaw it out and find out what the Cassidines did to it.

Michael and Sabrina are going steady. It’s unexpected but could be interesting. Tracy won’t enjoy Michael cavorting with the nanny, for sure. Maybe Sabrina will help loosen him up a tad. Spinelli/Maxie and Nathan/Ellie ended up switching partners in a Nurses’ Ball twist. I’m ok with it, and I hope Spinelli doesn’t leave town. I am a bit perturbed about baby Georgie, since Spinelli technically has custody yet she seems to just live with Maxie now.

It’s just never a good thing when anyone agrees to meet at midnight. Especially on the docks (if I lived in that town I would never go there – someone is always getting shot). Poor Anna was ready to leave her life for Duke and he shows up dying, with the clock striking midnight as he fell (nice touch). Finola Hughes did such a spectacular job through all of this – going to Duke, deciding to be together, justifying it, etc. It looks like Duke is dead, but Jordan was too smart to be taken out and instead blew away Duke’s bodyguard herself. Maybe we can be done with the shooting for a while. I loved Maxie’s comment about wanting one night in Port Charles where someone doesn’t get shot or hurt. Amen, Maxie.

So, GH, the Ball is over and now we look forward to those two live shows that are coming up. What fun that will be to watch! Bring it on!

Read all “Dear GH: We Need To Talk” columns!