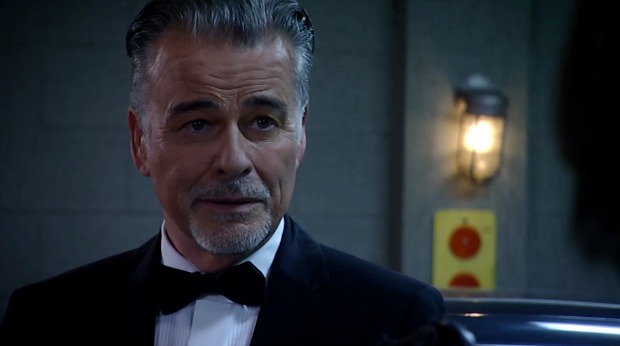 This week felt like a Nurses’ Ball hangover. I couldn’t clear my head or focus on what was happening and everything moved so slowly. The live show was a nice wake up call!

I loved the bit at the beginning with Nina and the table and her over-emphasis on “live.” Totally fun. The show went off without much of a hitch really. However, when Hayden threw the vase, it didn’t make any noise and then the camera cut to shards they already had there, clearly. The last scene where Anna shot Carlos went on forever, as they were waiting to use up their time. And then there was Lily at the end with Sonny!  What a strange and unexpected moment that was. I loved the big smiles on their faces!

I was sad to see Duke go, but the tartan at his funeral made me happy. And the lovely retrospective of their relationship was a tear-jerker (and it was also hysterical to see all that big hair and 1980s sets!). Felicia and Mac rose from the dead to attend the funeral, so that was great. There was a lovely moment with Lucy and Anna that was well-written and well-played. It was also very interesting to see Dr. Obrecht being kind to Anna after Duke died. Unexpected and wonderful. Could these two ever be friends?

I’m getting tired of the mob war stuff. Jake is always accused of something and always about to be thrown under the bus. I don’t know why Carlos had to go to Sabrina’s apartment to hide since clearly everyone knew he would go there. I felt so sad for Sabrina when she had to betray him. Don’t the Jeromes have safe houses and wouldn’t you have a getaway plan in place? Anna has broken her code again (as she did with Faison) and shot Carlos. That will have repercussions. And in other mob news, Alexis is mad at Julian for arranging the hit. How can she be surprised when she took him back knowing he is a mob boss? Sorry to be such a downer, GH, but I find these storylines to be a stretch sometimes.

I’m not sure what Jordan and Sloan were doing down on the docks, just chillin’ together. That was very weird. I assume they will have to cover for Anna. There’s a whole mess coming with Sean out to kill Jake, but Sam and Hayden are in the way now.

So Lisa LoCicero will be on leave to have her real baby while Olivia goes into hiding to protect the as yet unnamed Jerome baby. I know we need a reason for her to be away, but what’s dumb is Sonny would never in a million years allow Olivia’s child to be hurt as retaliation against Julian, so this one isn’t jibing with me, GH.

It was weird that Nikolas just threw in the towel on the whole Jake/Jason thing with Hayden. Will Jason believe her? Hard to say. Elizabeth completely flipped out. Quite a pickle there.

I loved seeing Tracy try to turn on the Fashion Cops after show post-Nurses’ Ball– super funny. I also liked her new longer hair. Why is she talking to Luke’s photo like he’s dead though? Where is he and what’s going on with his case? This is clearly a pause before his big send off, since Tony Geary announced he is leaving the show for good in June. Genie Francis is coming back, and I’m assuming it’s for that storyline. Don’t mess this one up, GH!

I was so happy Felix found a man – the red carpet reporter at the Ball apparently, but I wish we could see him and not just hear Sabrina’s end of a phone call about it. Go Felix!

I’m looking forward to another live show. Who is Nina marrying? I can’t begin to guess that one at all.

Are you loving the “General Hospital” live shows? Sad to see Duke Lavery go? Have a prediction on who Nina will marry? Sound off in the comments below!