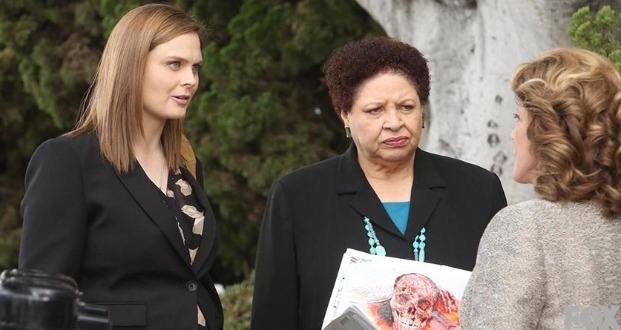 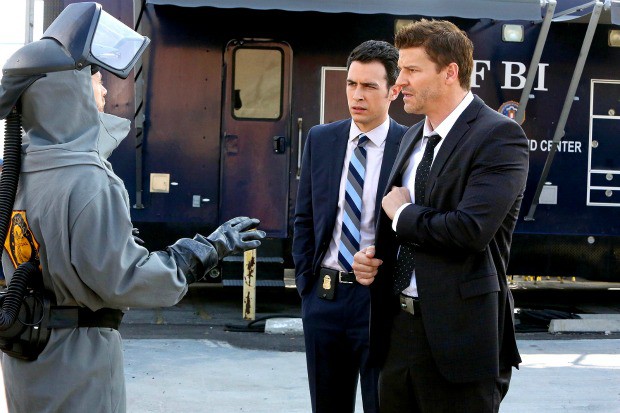 Since “Bones” was on such a long hiatus, we got two episodes back to back this week! Both were interesting and both, of course, had a social message. That’s one of the great things about the show – even though it’s a comedy/drama, it brings awareness to real life issues.

The first episode, “The Lost in the Found,” was about a young prep student who was murdered and found on a riverbank. Fourteen year old Molly Delson was at the top of her class (sound like someone we know?). She was the best in everything, except for music. She found herself an outcast among other female students. While working on the case, Brennan saw similarities between herself and the victim – they were both awkward in social situations, extremely smart, and disconnected with others. It made Brennan a little sad thinking about her youth. She understood what Molly had been going through.

Molly’s classmates are the key suspects, but Brennan figures out that the story doesn’t make sense (of course she does) and realizes that Molly killed herself and tried to frame the mean girls to bring them down. The poor girl was bullied into depression and suicide. Ugh.

Brennan (who is affected by the case), finally admitting she’s prego (lol), starts to think about the world she and Booth are bringing another child into. He assures her that there are good things as well as bad. Brennan is reflecting on life – that’s a good thing. It’s different for her – she’s always so logical and factual about things. I like that she’s thinking about her future.

The second episode dealt with an ex-baker who was also an ex-con named Alex Rockwell (that’s a good name for a convict – lol). He had been briskly arrested for ritualistic (Hodgin’s forte) serial killings and was put on death row – soon to be executed. Remember way way back in the first season in “The Man on Death Row,” when Booth, Brennan and attorney Amy Morton worked around the clock and stopped serial killer Howard Epps from being executed, but then found out he was guilty. That was a great episode.

Anyway, they only had 48 hours to stop the execution and, of course, Brennan figures out he couldn’t have committed the murder of the original victim due to rotator cuff injuries. Leave it to Brennan. The execution was stopped at the last second, but the writers kept me on the edge of my seat. I wasn’t sure which way they were going to go with this one. They could teach a very valuable, but troubling message – that innocent people are executed — or, as they chose to do, have the execution stopped at the last second.

Which is worse? An innocent man being executed, of course. But it does bring up the conversation about execution. Number one, should there be executions? Number two, should the evidence be iron-clad – meaning plenty of hard-core evidence and not one bit of doubt that the person is guilty — before sentencing someone to death. The answer to number two is yes. The answer to the first – it will always be up for debate.

I didn’t go into long detail about the cases, because it would be too long a recap. Instead, I thought I’d just do a short summary with the main issue of each case. Bullying and being different, and executions. Your thoughts?

To the character side … I like that they had Daisy back and questioning if it was okay for her to date someone only six months after Sweets’ death. I love that she made Brennan give her an answer.

Funny that Angela pointed out to Brennan that she was in “denial” about her own pregnancy. I wish they would have gone a different direction. It’s not Brennan-like, and it needs more attention to why?

Booth and Brennan in bed? Ugh, I wish this show was at 10 p.m. so we could get more romance – you know what I mean!

It seems that B & B have had more meaningful and playful scenes of late. I loved the old days when they had their banter and how they got to know each other – really know each other. I’m going to do a piece at the end of this season focusing on that topic and comparing the early episodes to these late season episodes. I think it will be good, and I would love your opinions when I’m done.

Not really much about Booth’s gambling problem, although we know it’s there – and he knows it there.

Leave thoughts in the comments below.