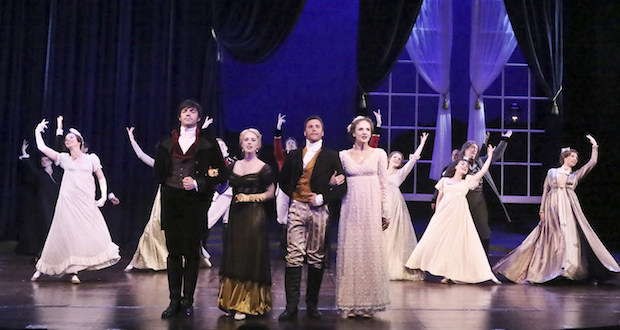 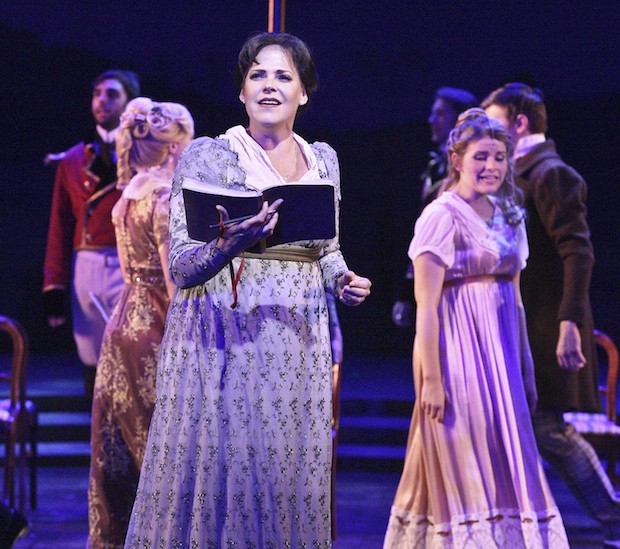 “Pride and Prejudice” is arguably Jane Austen’s most beloved novel, one upon which a number of modern romances are based. The premise of mistaken first impressions, love misconstrued for hate, and emotions in the presence of decorum and status are all classic romcom conventions that started with this story. This classicism both helps and hinders La Mirada Theatre’s world premiere of “Jane Austen’s Pride and Prejudice: A Musical.”

The new show, which has been in the works for some 15 years, is the first fully staged version of the musical. Directed by Igor Goldin with book and score by Lindsay Warren Baker and Amanda Jacobs, the play tells the whole story of “Pride and Prejudice,” the romance between headstrong Elizabeth Bennet and reserved Mr. Darcy, but with an extra twist: Jane Austen herself is the main character.

The play opens with Jane Austen (Bets Malone) at her writing desk when her sister Cassandra (Jill Van Velzer) enters, brandishing a letter for Jane from her publisher. Her first novel “Sense and Sensibility” has sold so well that the publisher is anxious to print something new from the young author, but Jane doesn’t know what to submit. Amid Jane’s wonderful bouts of insecurity and imposter syndrome (can you imagine), Cassandra, who has quite a lot of importance in this story, talks Jane into revising her first literary attempt, “First Impressions”—the original title of “Pride and Prejudice.” The story we know and love unfolds as Jane strives to do what Cassandra asks of her: to let her characters live. Jane walks among them, interacting with them as she revises the draft of her first novel. At times she tells the characters what will happen; at other times she watches the characters live their own lives while she writes down what they say or do. This allows for fewer extra characters, in an already fairly large cast; for example, Austen tells Lizzie about Darcy’s breaking up Jane and Bingley, since Colonel Fitzwilliam is not present. It’s a clever twist that adds a little freshness to the traditional story. 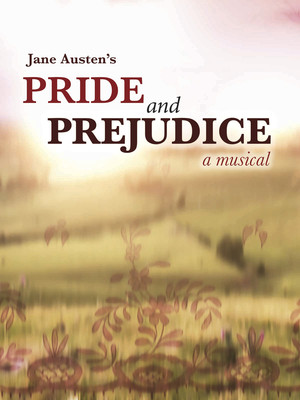 The question is whether such a timeless story needs that freshness. For one, it’s so iconic that it’s difficult not to compare it with the versions we know and love, and just as the press materials seem closely reminiscent of the beloved BBC miniseries with Colin Firth, we can’t help but long to watch our favorites again, even while watching this new version. And we’re not talking a complete overhaul here, like the recent, and brilliant, online adaptation “The Lizzie Bennet Diaries.” “Jane Austen’s Pride and Prejudice” is close enough to the novel that it feels almost unnecessary to add music or additional scenes—even though I do like the additional scenes. The story is of course strong enough to stand on its own—as time has proven. But it’s certainly wonderful to see a live production of “Pride and Prejudice” (how badly, really, can one mess it up?), so it’s certainly worth seeing for that.

While I mostly enjoyed the production, there was something I didn’t quite like about it, and I’m still struggling to put my finger on exactly what. Primarily, I think it’s the music, which is very twittery. It’s not pastiche, yet it’s clearly written to be of Austen’s period. It’s slightly reminiscent of “The Secret Garden,” and yet I somehow ended up with a Bounty jingle in my head as I walked through the parking lot. It starts to feel repetitive by the end (especially the motif of “choices,” which starts the show off and pops up again and again throughout the evening), and in some instances I question why they decided to write a song at particular moments. Lizzie’s mother, Mrs. Bennet, for example, sings a comedic song about her poor nerves, performed in hysterically over the top fashion by Amanda Naughton, but it happens right after Lizzie refuses Mr. Collins’s proposal (which isn’t shown in the play) and Mrs. Bennet tries to get Mr. Bennet to convince Lizzie to accept his hand (the joke of which, by the way, the audience knew was coming). I certainly understand wanting to give Mrs. Bennet a song like that, but it seems odd to have it after a moment that is more about Lizzie, or at least her relationship with her father.

The casting is excellent. Naughton also plays Catherine de Bourgh, and I would have had no idea had I not read it in the program later. Patricia Noonan’s Lizzie is lovely with a strong, pretty singing voice, but—and I know these are both odd, nitpicky things to point out—I found her more beautiful than the “great beauty” Jane Bennet (Samantha Eggers), except that she has a strange posture. It’s clear that she’s not wearing a corset (I doubt any of the cast were), and I wanted her to be. Malone plays Jane Austen with humor and care, and slips easily into a few of the extra characters (like Mr. Darcy’s housekeeper), though she has a slight nasal quality in her singing voice. Arielle Fishman is strong as the impetuous Lydia, shining among a backdrop of the equally impressive ensemble.

As good as these folks are, the perfect casting choice was Brandon Andrus as Fitzwilliam Darcy. Andrus plays the perfect blend of aloofness and decorum, vulnerability and strength, pretentiousness and self-effacement, presented in a gorgeous package with a beautiful voice. He provides that exquisite feeling in our gut that we ladies get with good romcoms; the exciting, tingly feeling in our hearts that keeps us watching again and again and again. 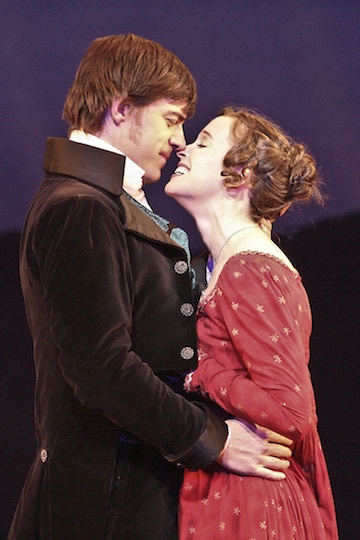 In other words, I was totally fangirling. It’s quite sad really.

There are a few additional scenes added, mostly between Jane Austen and her characters or her sister Cassandra—who is responsible for some of the major decisions in the story. For example, it’s at Cassandra’s insistence that Jane has Charlotte Lucas marry Mr. Collins. Cassandra relates to Charlotte, and in fact jumps in and plays her while Jane revises her novel, and Cassandra reminds Jane that not everyone can be as romantic as she. In fact, I find it slightly disappointing that so much of “Pride and Prejudice” seems thanks to Cassandra, but I don’t know enough about Austen’s real history to know if this is true.

In addition to scenes between Austen and the others, there are a couple of additional scenes within the “Pride and Prejudice” story. Most notably, the scene between Darcy and Catherine de Bourgh, after Ms. de Bourgh speaks to Lizzie; the one that gives Darcy hope for a future with his beloved. It’s every young romantic’s dream fanfiction to have that scene brought to life, and it’s wonderful to see it here.

Because this is a world premiere and the first production ever of this show, it is still going through some changes (as the cast and crew told us in a talkback session after the performance). I would be curious to see this production again toward the end of the run, to see how it has changed.

Despite my ambivalent feelings about the music, this production is strong and solid, with an excellent cast. It’s a wonderful opportunity to see Jane Austen’s most beloved characters brought to life before your eyes.