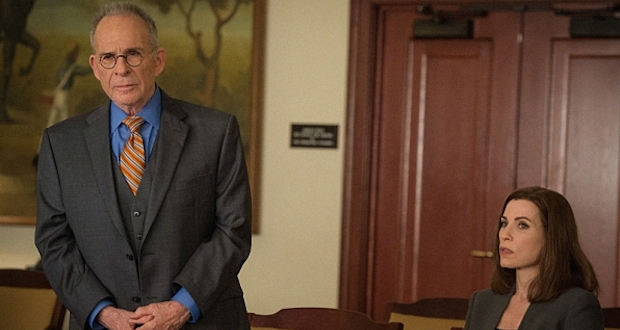 Oh good-wifers, what an upsetting, frustrating episode of “The Good Wife.” Everyone is in trouble, nothing good appears on the horizon, the disgusting men with all the power are tearing down our strong women, and it just makes me wonder, again, why anyone would ever want to get into politics.

Picking up on the heels of last week’s news story about Alicia, there’s now a question of the validity of her State’s Attorney win. The media is touting “another Florrick Scandal,” and Alicia is all over the news, both for possibly stealing the election, and for the scandalous emails that she and Will supposedly sent to each other. I really don’t like the email storyline, not just because it’s frustrating, but because I do not believe that Alicia and Will would be so imprudent as to send emails like this to each other. I just don’t buy it. They’re too smart, and they know that there’s too much at stake for them to write such personal opinions in their emails—especially using emoticons and “LOL” and the like. It just seems amateurish and out of character. I don’t see Alicia (or Will, for that matter) ever using the term “lol.”

But the emails are at least forcing Alicia to come clean to her daughter Grace, who is once again caught up in a scandal surrounding her parents. When Grace asks her the truth about Will, Alicia tells her that it’s ok to lie to people when the truth isn’t any of their business. I’m not sure if that’s exactly what she meant, or if she realized what she was saying. I’ve always loved what a great mom Alicia is, but this is perhaps not the best response. But her being a good mom (and a good person) makes what follows even more upsetting.

The email scandal is of course nothing compared to the election scandal—though some people, like the snotty waitress at the coffee shop, seem to think it’s important. But Alicia visits the Democratic National Committee, whose chairman alleviates her fears and tells her they’re completely behind her for State’s Attorney. They bring in the (apparently) great Spencer Randolph (Ron Rifkin) to represent her, and both Marissa and Alicia are completely star struck.

Frank Prady’s former campaign manager Martin Parillo (Remy Auberjonois) runs the charge against Alicia, claiming that they found hacking devices in many of the polling places where Alicia won; precincts that were thought to go to Prady. He wants a complete recount of those places with a 4-point difference in projected versus actual results, and fights for it before the election review board.

If ever there was an illustration for the term “throwing your weight around,” Spencer Randolph is it. He enters the room late, subtly but intentionally pulling attention, and clearly puts on a show, pretending to whisper to Alicia and establishing a rapport in the eyes of the committee. Alicia puts all her trust in Randolph, believing that he has her best interest at heart. He shows that some of the precincts thought to go to Alicia had instead gone to Prady, and he supports her when the chairman of the Help America Vote campaign is proved to be corrupt—especially thanks to Alicia recording their conversation. That’s an extremely exciting twist. I love when the disgusting corrupt jerk gets his comeuppance (as limited as it was). Too bad he’s just one in a line of them.

Randolph is winning the case for Alicia—at least until Parillo finds that the hacking technology was not as old or dormant as Florrick-Agos-Lockhart’s IT guy Howell thought (Jason Babinsky plays Howell, and he’s getting much more airtime with each new episode). Suddenly, the Democratic Party tells Alicia that they want her to step down from her newly appointed position, because a recount could reveal problems for the Senate seat winner. The hacking devices were apparently planted by the DNC to protect the senate race, so they could maintain a two-thirds majority.

When Alicia and Eli confer with Peter, Peter tells her to continue the fight, and to let Randolph win the case for her (I’m starting to wonder about Peter’s role in all this). Problem is, Randolph completely changes face and flatly lies to the review board, calling Alicia deceitful and accusing her of stealing the election. She tries to defend herself but isn’t allowed. Randolph completely uses her as a sacrifice for the Democratic Party, promising (as the DNC chair also promised) that “The Party would take care of her.” Man, that’s some “1984”-sounding baloney right there.

So it looks like Alicia’s tenure as State’s Attorney is very short lived. She hasn’t even had a chance to take office, and it’s already over. I’m so sad for Alicia, but also sad for the show. She is such a strong character, it’s heartbreaking to see her torn down and treated so terribly. She deserves better. Plus the idea of her working so hard for so long just to have her win taken away from her because of other people’s shortcomings and demands is devastating. She’s helpless. And Alicia is rarely ever helpless.

Alicia’s not the only one in hot water. Investigator Andrew Wiley confronts Diane about Kalinda’s doctoring of the metadata, as his kid’s talking giraffe toy conveniently conveys the subtext for us (as if we could miss it). Diane tells him to leave, then confronts Kalinda, and tells Cary and David Lee about what happened. David suggests coming clean about everything to the Internal Affairs committee. Diane agrees, and they tell the committee everything, but Geneva Pine responds with obstruction of justice charges against Diane—which she’s willing to drop in exchange for her testifying against Lemond Bishop. So FAL are back to square one as with Cary’s trumped up case, but now the evidence against Diane is much more solid.

Kalinda knows that it’s her fault Diane is facing disbarment, since she doctored the metadata. She seems to be scheming a plan to turn in Bishop, but Cary can tell and refuses to let her. He knows that Bishop will kill Kalinda if she turns on him. (Yikes! Is that how Archie Panjabi will leave the show?)

Cary goes to Geneva asking if Kalinda had approached her yet. When she says no, he asks her to agree to refuse Kalinda when she does approach her. Cary wants to protect Kalinda by offering information on Bishop himself. Why didn’t he just do that before?

So what do you think, good-wifers? Will Cary actually testify against Bishop now, when he continually refused to do so before? Is Kalinda’s life so much more important to Cary than his own? What is in store for Alicia now that she has to step down as State’s Attorney? Or do you think there could be a way out of that? Did this episode frustrate you too, or did you love it? Let me know in the comments.