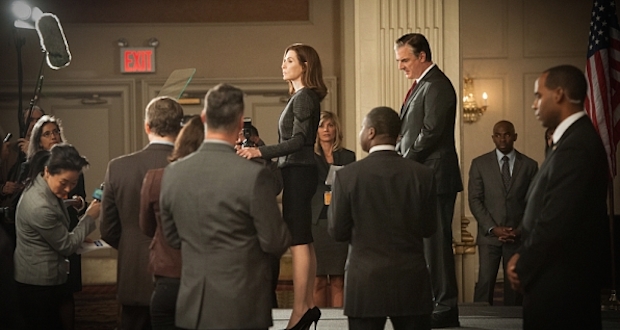 What a sad day at “The Good Wife,” huh good-wifers? Diane has a court victory, but that’s the only good thing happening at the moment, as Kalinda gets deeper into trouble, Alicia and the firm she started have a complicated misunderstanding, and Alicia reaches a crossroads with seemingly no options for the future.

First, the good news: Diane works to protect an elderly woman who had sent a package of ecstasy tablets in the mail and, because of the number of pills she had sent, faces a mandatory maximum sentence of 6 to 30 years. R.D. (Oliver Platt) joins in for a while, because mandatory maximum sentencing is one of those across-the-aisle political issues where both sides agree it’s a failed policy that should be abolished. (What? There’s actually something the two sides agree on?) R.D. wants to use a different suit as a test case, because grandmas are not as relatable as white men (whatever, dude), but Diane insists on taking the case anyway. Fortunately, after trying unsuccessfully to prove that the woman is an addict so she can go to rehab instead of jail, Diane discovers (with Kalinda’s help) that the pills were cut in half, so there were only half as many as they thought there were. That brings the number low enough to not require mandatory maximum sentencing, and the judge declares that the woman’s 6 months probation has already been served.

The episode starts off with a familiar scene, as they recreate the opening moments of the series: Peter and Alicia stand at the podium while the press frantically snaps photos. The difference this time is that Alicia’s the one caught in a scandal and addressing the public, and Peter is standing dutifully beside her. She again pauses as they walk down the hall after the speech, but she’s the one who was (figuratively) slapped in the face.

Poor Alicia is forced to decline the office of State’s Attorney, despite her hard work and clean campaign, because of the events in last week’s upsetting episode. She’s questioning what to do with her life now. Fortunately, there seems to be a chance she can return as a named partner to the law firm she started, despite their now being called Lockhart, Agos, & Lee.

What a relief for Alicia, and she lets out a big gasp. The problem occurs later, when she receives a call from a client who says that Diane told him Alicia was not returning to the firm. Alicia now thinks Diane and Cary were playing her and don’t have any intention of bringing her back. On Peter’s suggestion, Alicia decides to return to the office to void her exit package, but use the money to start her own firm.

Alicia, with her representative Finn, return to the office to discuss it, and Diane, Cary, and David suspect she’s up to something (as she is). But it turns out they really do want Alicia to come back (at least Cary and Diane do; David, not as much). But now they’re annoyed that she’s playing them and trying to poach their clients. And I’m annoyed that they’re going to continue a frustrating misunderstanding instead of talking to each other about it and easily solving the problem.

Fortunately, Kalinda comes to the rescue. She tells Alicia about the misunderstanding and says to speak to Diane about it. Diane and Cary agree to take Alicia back—until R.D. says he’ll drop the firm if she does. Alicia is damaged goods now, and no one will work with her after her scandal.

Kalinda is doing a fair bit of rescuing and trying to make amends, yet simultaneously getting herself deeper in trouble. She agrees to provide Geneva Pine with damaging intel against Lemond Bishop, as long as she doesn’t have to testify and Geneva leaves Cary and Diane out of it. It’s very kind and selfless, at least to the people she cares about.
Kalinda meets with Bishop’s employee, Dexter (J.D. Williams), and asks him to turn on Bishop, but he refuses. But she steals a jump drive from his car without him knowing. When she drops Dylan off at home after school, she sneaks into Bishop’s office and downloads a number of files off his computer, onto the jump drive. (I’d think they’d consider that information obtained illegally; how would it be admissible in court?) Bishop discovers it because of an error message on his computer screen, but after questioning Kalinda, he decides that she is innocent and that Dexter had done it.

After Dexter visits Cary looking for Kalinda, Cary knows she’s in trouble (despite his trying to save her from it). She eventually confronts him and tells him what she did and that there’s nothing he can do about it, then leaves. She also has a very short phone conversation with Diane, making sure that Diane and Alicia have apologized for their misunderstanding, and providing one last piece of useful information for the case Diane’s working on. She also explains that she’ll not be in the office tomorrow. Diane finds Kalinda’s waxing philosophical odd, but doesn’t think too much of it—until the next day when Kalinda is nowhere to be found.

Kalinda also visits Alicia, but Alicia is not at home. After waiting for a while and taking a sad trip down memory lane while looking at Alicia’s mantel photos, she leaves a note for her with Grace, and then says goodbye.

Turns out, it’s her final goodbye, not just to Grace or Alicia, but to us all. Kalinda has skipped out of town for good. She knows there’s no turning back and that Dexter will turn her in to Bishop, and then Bishop will kill her (despite his being arrested). She knows that leaving is her only option.

So that’s it for Kalinda. We all knew this day was coming, that Archie Panjabi was leaving the show, and I think many of us suspected that it would happen this way. It’s still very sad, especially because no one really gets a proper goodbye. What does the note say? (fraka-kaka-kaka-kaka-kow!?) It doesn’t seem to faze Alicia at first—until she breaks down crying. After all, Alicia has more than Kalinda’s departure on her mind. She has no idea what to do with herself now.

I have to say I’m disappointed that Alicia’s already done with the State’s Attorney office. I can see why the writers would want to keep her closer to the law firm, but Alicia’s such a brilliant, strong, feminist character that I hate that she’s been brought down in a scandal so quickly and suddenly.

– I’m always amazed at how quickly they can change the signage at the law firm, from Florrick Agos to Florrick Agos Lockhart, to Lockhart Agos & Lee (how’d Diane get top billing?). I guess there’s nothing money can’t buy.

– What a pill David Lee is. How does anyone ever trust him at all?

– I love the sparring between R.D. and Diane. As I’ve mentioned, it’s rare to find a show that so openly discusses politics in this manner, yet they clearly and directly show both sides of the story without getting emotional or badmouthing. I’ve never been great at debate, so I love that Diane so strongly holds her own in these discussions.

– It’s so sad to me that R.D. is powerful (or rich) enough that his say decides Alicia’s fate. They can’t afford a little loyalty to the woman who started the firm?

– I’ve always marveled at how quick and easy it is for people to get around. Nearly everything happens in person (because it’s better television), but they’re always under time constraints, yet they can easily get from the courthouse to Alicia’s apartment to Cary’s apartment to Bishop’s house, seemingly within minutes. Everyone must live within about 2 blocks of each other.