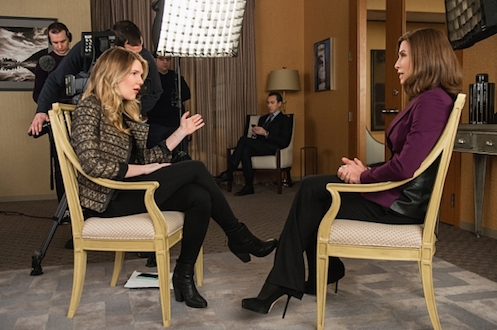 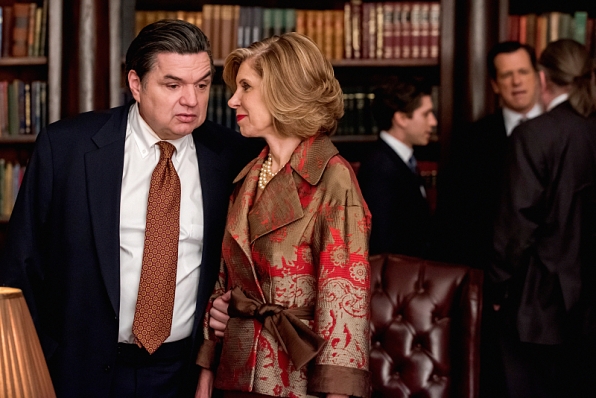 Well, good-wifers, last night’s “The Good Wife” is simultaneously fascinating and frustrating, as Diane converses honestly about the horrible new “religious freedom” laws in Indiana (though on the show it’s Idaho), Alicia tries to do damage control against a vindictive journalist, and Kalinda finally faces backlash for her past actions.

Lily Rabe, in between seasons of “American Horror Story,” returns as the irritating journalist, Petra Moritz, and she’s gunning for Alicia. While working with her video editor (who’s apparently responsible for the motion graphics too) on a gentle puff piece about the new State’s Attorney and her rise to power, she gets wind of the emails that the hackers threatened to release last week. Apparently the hackers are still angry with Florrick-Agos-Lockhart and are demanding an apology. One of them even leaks some of the emails to Petra. She quickly changes her puff piece to a take-down.

Eli and Josh, who is still spouting that annoying “blah blah” babble whenever he can, try their best to do damage control, but Petra remains a step ahead of them. When her boss (Ruben Santiago-Hudson, formerly of “Castle”) decides to hold off on the story until he can weigh the ethical implications, she decides to leak the emails to Gawker, forcing him to put out the story anyway so as not to get “scooped.” Eli counters by offering Petra an exclusive interview with Peter. Even though Petra knows Eli’s just trying to stall, she agrees to the interview anyway.

Sneaky Eli still knows what he’s doing. Before Petra’s interview with Peter, Eli sends Alicia on an interview with another journalist (Mo Rocca) who’s apparently “dumb as an ox,” while Eli himself interviews Kim Masters (playing herself). Alicia owns the conversation with the dim-witted journalist, calling her relationship with Will “a flirtation,” while Eli gives Masters the scoop (at least his version of it) before Petra can report it. Peter lets both of these tidbits drop while meeting with Petra, making it clear that she lost her scoop, totally catching her off guard, and saying she’s had it out for Alicia for years. He smugly has the upper hand, as her boss shuts down the interview.

Before these interviews, Alicia has a very civil and frank talk with Peter. They discuss the situation and how she needs to control the narrative. She doesn’t want to lie about Will, but Peter convinces her that Will would have wanted it that way, because he always knew what needed to be said. Peter also admits that he still loves Alicia, but Alicia responds that the word “love” has been so exhausted. “I wish it meant something for me,” she says. How incredibly sad that is.

It frustrates me that Alicia can’t be honest and own the relationship with Will, like Eli has recommended to others when they’ve screwed up in the past. There’s a messed up, double-edged sword for women that doesn’t apply to men, and Alicia is forced to live up to it, even though she already won the election, and despite Peter’s behavior in the past. And it doesn’t matter if Peter was “never as bad as you’ve wanted me to be,” as he tells her, because he was still wrong. The degree how much is secondary. I personally don’t think Alicia’s at fault, and I’d suspect others would agree with me, but she has to uphold her reputation as “Saint Alicia.”

So Alicia’s ahead for now, but apparently not for long. As she and Eli watch the piece on television, it’s all sunny and warm—until the end, when Petra hints that there was some foul play in the election, and that some of Frank Prady’s votes may have been counted for Alicia instead.

Dun, dun, DUNNN!!! (Where did she get that information?)

I did not care for this story line at all. I found it irritating, and a little contrived, but it’s been very clear since day one that creators Robert and Michelle King clearly do not think highly of journalists. The journalists on the show are always out to get people. Or they have no clue what they’re doing.

Fortunately, Diane’s storyline is much more interesting, as she engages in a brilliant debate, followed by a mock trial, against the billionaire R.D. (Oliver Platt) and his team. He first grills her about a hypothetical appeal for a baker who lost a discrimination suit because she refused to create a wedding cake for a gay couple. Taking a page (or several) from the current real life discussions about the “religious freedom” laws recently enacted in Indiana and Arkansas, “The Good Wife” lays out the arguments for and against a case of this nature in an honest, forthright, yet cool-headed discussion. It starts to feel slightly preachy, and definitely like a carefully taught class—but I for one need to learn the lesson. It’s fascinating, and presented so clearly. This is what makes “The Good Wife” such a brilliant show.

The problem is, Diane learns that she isn’t just participating in a hypothetical think tank, she’s being used to help R.D. strengthen his case in the appeal of a wedding planner who lost a discrimination suit to a gay couple. (How did Diane not see that coming? She must have been aware of what’s happening in the world.) When she confronts R.D. about it, he says he wants her to defend the gay couple, played by stand-ins, in a mock trial, with a judge she admires, and the real wedding planner.

Diane agrees to do it, and she’s doing very well—especially when R.D. realizes that the person playing Diane’s client is R.D.’s real-life gay nephew (Wesley Taylor, late of “Smash”). R.D. gets angry that Diane made it so personal (even though he told her to do so), stating that the law shouldn’t be personal. Diane disagrees, stressing that the law should be fair, but it also is personal. “It has to see the human side too, or else it’s meaningless,” she says. The exercise doesn’t change R.D.’s decision though: he’s still going to fund the wedding planner’s appeal, because he believes that people should hold their ground for their beliefs.

Meanwhile, poor Kalinda stews in her own hot water, as the investigator Andrew Wiley (Tim Guinee) returns after three years, with his kids in tow, as usual. He’s working for Internal Affairs and looking into the Brady violation that freed Cary, and the email that was deleted by the detective. At first it looks like Kalinda might be in the clear because Andrew thinks it was Geneva Pine’s doing (that’s three weeks in a row now that they mentioned Ms. Pine without her being on screen; I’m starting to feel bad for the actress), but eventually he learns that the detective was in court for another trial at the same time he supposedly deleted the email. Andrew figures out that the metadata was doctored.

As much as FAL’s IT guy tries to help Kalinda, he probably gets her in worse trouble, and Andrew is now on to her. He somehow knows that she’s the one who fixed the metadata and wants her to come clean (How does he know that? What proof does he have?). Fortunately, Kalinda confided in Finn before this point, so he’s trying to help her—but even he admits that he has no idea what to do.

So clearly Kalinda’s in trouble, as we all knew she would be, and the show is gearing up for Archie Panjabi’s imminent departure. With only a handful of episodes left before the season finale (scheduled for May 10), it’s unlikely that there’s any hope for Kalinda.

A few other random thoughts:

– Since Josh and Eli are working so closely together on Alicia’s case, I gather that Johnny Elfman is, in fact, gone. That’s sad.
– Peter Florrick and Petra Moritz. What are they trying to tell us with such similar names?
– I love those surreal moments: the funny visuals accompanying the hypothetical lawsuit, and the real wedding planner happily stating, “my favorite florist is gay,” like that makes everything ok.
– It’s good that Finn exists outside of Alicia’s world, but absolutely no interaction with Alicia? That’s disappointing.
– Marissa is vastly underused this episode, and just when they were starting to appreciate her abilities. Bring back the smart, savvy Marissa please.
– It’s so great to see Diane so strong and fierce again. She’s been kind of a minor player lately. She kicks butt in this episode (…except for not being suspicious of R.D.’s ulterior motives. Ah well).

So what do you think, good-wifers? Is it clear that Kalinda will go down for messing with the metadata? What do you think will happen to her? Will the leaked emails continue to wreak havoc for Alicia in her new role (especially judging by the preview for next week, promising the biggest shock of the season)? And will Alicia ever feel able to love again, or does it matter when she has an awesome career? Share your thoughts below.