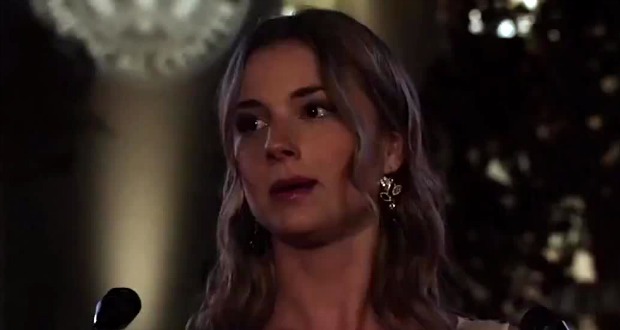 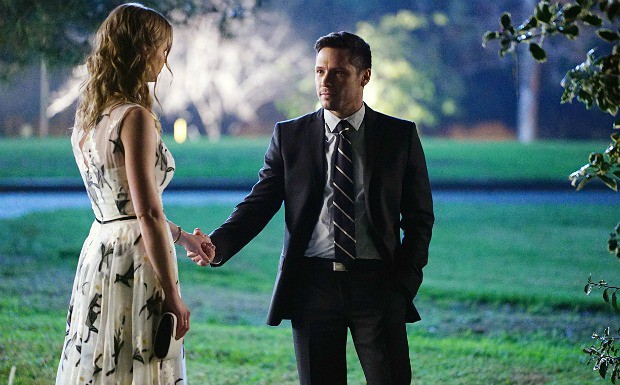 “Clarity” – oh my, Emily did make things clear to everyone in the end scene of “Revenge.” More about that later.

In this episode, Emily is feeling the guilt for all of her wrongdoings. She wants to make things right with Margaux and plans to do so – with a huge reveal.

But first … after a lot of soul-searching, Margaux does an about face after the loss of her baby and decides not to seek her own revenge on Emily. Now that’s the good girl Margaux that I know and like. But will it be that easy? Victoria is back on path of wanting Emily “behind bars” for what she thinks she did to Margaux – pushing her into the oncoming car. Margaux almost tells Victoria that she lied about being pushed, but doesn’t.

At the hospital, the board decides not to name the new wing after Daniel, even though Victoria had made a huge donation (she wants it back). Emily tries to convince the board to change its mind, but they won’t. Emily’s guilt gets worse and Victoria fumes. I understand Victoria’s feelings on this, and she is unaware that Emily didn’t push Margaux – in her mind, Emily is always the one to blame. I wish they would keep to the truce – oh, that wouldn’t be fun now, would it?

What do you think of Louise and Nolan? Nolan confides in Jack that he doesn’t want to be married to Louise anymore. It served its purpose, now Nolan wants to be free to explore other relationships. I thought it was sweet that he felt bad about it, but fortunately (for Nolan), Louise overheard and makes it easy on him (we think) to dissolve the marriage. I really hope she doesn’t have anything up her sleeve – you know how this show is!

Ben is starting to become a little annoyed that Emily confides more in Jack than in him. “Ben, she has known Jack her whole life and he knows everything!” I do understand Ben’s point of view, and it didn’t help when he saw Emily and Jack together on TV.

The end scene. Jack escorts Emily to the groundbreaking ceremony of the new hospital wing. Did you know what she was going to say when she got up to the podium? I wasn’t sure. Well, she tells everyone – on live TV – that Malcolm Black tried to kill her the night that Daniel died, and he saved her. The problem is that Jack had to recant the story that he told to the police. I do get why Jack’s mom, Stevie, was so mad. It put’s Jack in a bad place with the police. We’ll have to see how that pans out. Poor Jack.

To everyone’s surprise, after Emily tells everyone about Malcolm Black, she admits that she is really Amanda Clarke. Everyone who didn’t know is shocked!

So, is this going to be the last season of “Revenge”? Isn’t this Emily’s last secret? I’m not sure how the show will keep going. Although Emily/Amanda does have a problem with respect to all of the chaos she created (deaths, falsifying records, breaking and entering, kidnapping, you name it) to get to this place.

Excuse me, but did we ever find out what happened to Charlotte? Seriously, where is she? I do hope the show goes on, but I’m not sure where the story will go for another season. They are creative writers, so come on guys and gals, give us another season of fun!

What did you think of Emily’s big reveal? Will she and Jack finally get together? Do you want a season 5? Sound off in the comments below!