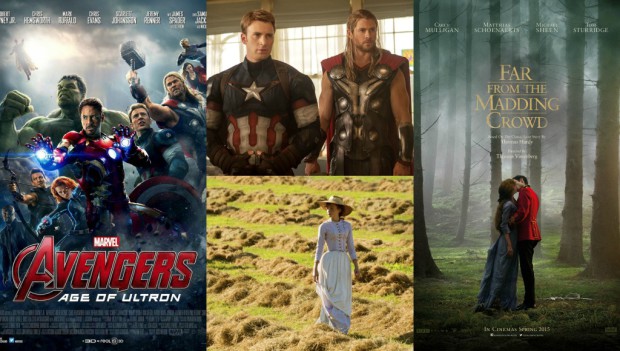 At long last, “Avengers: Age of Ultron” flies to the big screen this week! Based on the overseas box office numbers ($201.2 million at this writing), count on this latest installment to the Marvel franchise to be one of the biggest blockbusters of the year.

When the villainous Ultron (James Spader) emerges, it’s up to The Avengers to stop him, as uneasy alliances form. Along with Nick Fury (Samuel L. Jackson) and Agent Maria Hill (Cobie Smulders), the team reassembles to defeat the terrifying techno-villain. Along the way, they encounter two powerful newcomers, Wanda Maximoff (Elizabeth Olsen) and Pietro Maximoff (Aaron Taylor-Johnson), and meet an old friend in a new form known as Vision (Paul Bettany).

FAR FROM THE MADDING CROWD

Based on the literary classic by Thomas Hardy, this romantic drama is directed by Thomas Vinterberg and follows the story of independent, beautiful and headstrong Bathsheba Everdene (Carey Mulligan), who attracts three very different suitors: Gabriel Oak (Matthias Schoenaerts), a sheep farmer, captivated by her fetching willfulness; Frank Troy (Tom Sturridge), a handsome and reckless Sergeant; and William Boldwood (Michael Sheen), a prosperous and mature bachelor.

This timeless story of Bathsheba’s choices and passions explores the nature of relationships and love – as well as the ability to overcome hardships through resilience and perseverance.