“Laugh Killer Laugh” is a strange film by former Jerky Boy Kamal Ahmed. It has a number of flaws, but there’s also a lot to like about it. The movie starts with a chilling monologue by Tom Sizemore about the fact that he’s a pedophile who likes little boys, but that doesn’t mean he’s a homosexual. 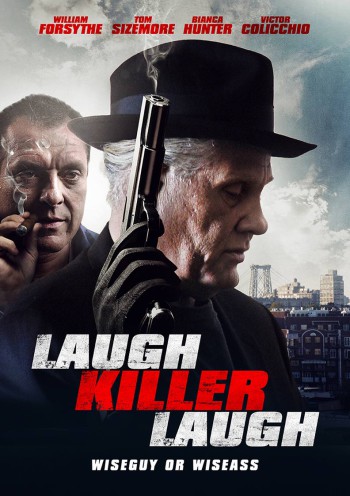 It turns out that Sizemore is a voice inside the main character’s head. That character, Frank Stone, is played by William Forsythe. Apparently, Sizemore’s character was the headmaster at Frank’s school when he was an orphaned kid, and Frank was one of the victims. As a result, Frank grew up to be a jewel thief and a killer, taking on jobs from a low-level mobster.

For the first part of the film, Frank has little to no affect. His face is a blank, but Forsythe manages to pull us in through his inner life. It reminded me of what Billy Bob Thornton did in “Sling Blade,” although Frank is psychologically damaged, not mentally impaired. Anyway, that’s acting, folks!

Despite the fact that Frank has no problem putting a bullet in someone’s head, he allows his mobster employer and cronies to make fun of him without so much as a slight outburst. When Frank accidentally runs across a woman who mistakes him for one of her writing classmates, he decides to try the writing class.

Frank gives the teacher a fictitious name and takes to writing about his life in Mickey Spillane style. One of his outspoken classmates says that it sounds like a gangster movie but not like anything real. Only Frank knows that he has written about his life exactly as he lives it.

Meanwhile, the woman in the class wants to befriend Frank, and while he’s reluctant, he begins to see in her the possibility of a normal life.

The film takes a turn when the gangsters find out that Frank is writing about them and reading it in class, which puts both Frank and his new girlfriend at risk. I don’t want to disclose where the title comes from. Let’s just say that at some point, Frank has an epiphany and turns into a different man in many respects.

This noir/Quentin Tarantino-esque movie has a lot of problems, but it’s Forsythe’s performance that anchors it and makes it worth watching. There are a lot of comic elements, as well as violence, but it’s entertaining primarily because at its helm is an actor with a great depth of experience and skill.