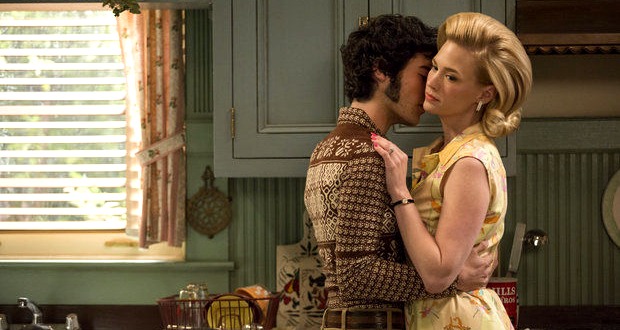 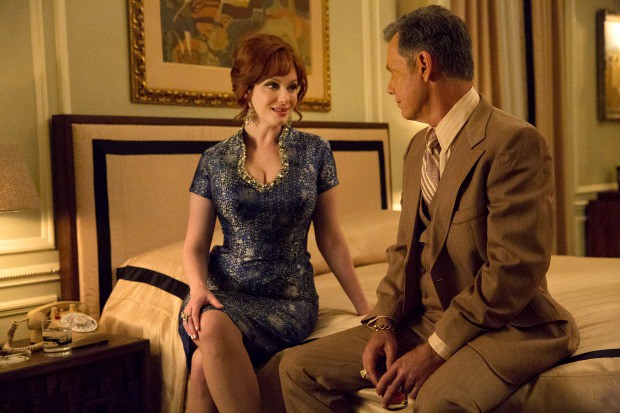 Before I riff on this week’s “Mad Men” episode, I have a slight vent. At the end of “The Forecast,” one of AMC’s smoky-voiced announcers said there were only three episode left. I practically fell off my chair. Not so! There are four. Countdown to the finale on Sunday, May 17. Me, I’m probably going to a members-only party at the Museum of the Moving Image in Astoria, Queens. (Sorry, but it’s sold out.)

I have to begin with a diatribe against Don’ real estate agent. Who would put up with that berating? And was she realistic as a character? She knows no boundaries, this one. Complaining that the place reeks of sadness and a loser? Way over the top. Of course she had Don by the cajones, she knew he was an enthusiastic seller and that firing her would only delay the sale. I so loved that Don brought the patio furniture into the sunken floor living room space. I hope his next place has more light than his in-between-marriages apartment from Season 4.

The VX (Viewer Experience) of this episode was certainly better than last week’s, but on second viewing, some of the thinness of this episode began to show through, at least where plot was concerned. That got me pondering the writing challenges of a workplace series. If you think about it, the best of them are set in legal and law enforcement settings and hospitals. “L.A. Law,” “Law and Order,” “E.R.,” “House.” An ad agency? The drama is negligible. A client likes or doesn’t like a proposed campaign. The agency covets a client. (In this episode, Ted proclaims he wants to land a pharmaceutical client.) The high drama was when the agency was in play, first when they learn that Putnam Powell is going to sell them in Season 4, and they stage a coup, with Lane Pryce leading the way, and then again in Season 6 when they merge with Cutler Gleason, and yet again at the end of Season 7a, when they let McCann buy them. So, props to Matthew Weiner and his writers for rising to the workplace challenge.

My favorite part of this episode was Joan and her man Richard Burghoff, played by the winsome Bruce Greenwood. Despite the bumpy start, with Richard telling Joan that he isn’t interested in a woman with a young child – You can’t see the Pyramids! – this relationship has Big Enchilada written all over it. Even the way they meet! He accidentally walks into the agency’s L.A. office, looking for his eye doctor. They have dinner, sleep together … When he asks if she’s married, she says no, and doesn’t let on that she has a child. He comes to New York, surprising her, and she tells him she has a child after he gets suspicious over calls home, to a babysitter! He declares her having a child is a deal breaker but, contrite, shows up at her office the next day with flowers and an apology and, well, a commitment of sorts. He’s going to buy a place in New York, and she is going to visit, Joan and her son and her mother. (Joan, wanting to get all the details out in the open, tells Richard that she lives with her mother and oh by the way, she was married not once, but twice. Now, why she still lives with her mother, in the same apartment she’s lived in all these years, now that she’s a partner who got bought out at some crazy price, is one of the show’s unsolved mysteries.)

Richard not wanting to get involved with Joan because she had a young child angered some viewers, but I totally got it. There are single women out there who are looking for single men who, if they are fathers, have children that have left the roost.

Sally’s role in this episode was intriguing. First, Glen Bishop shows up at the Francis home. Betty doesn’t recognize him, and also isn’t aware that Sally has stayed in touch with him. (“We’re pen pals,” Glen explains. Oh, the days before email and Snap Chat.) Glen asks Sally to come to Playland (which is an actual amusement park, in Rye, New York) with him and a friend. Sally asks Betty for some money. In the back and forth, Glen tells everyone that he is going to Viet Nam, he enlisted, and Sally gets incensed. Betty tells Glen, “Don’t listen to Jane Fonda here. (Oh, these lines, so many lines.) Sally doesn’t go with Glen and his friend, whom he just met that day.

Sally is going on a teen trip, and wants to say good-bye to her dad. Don takes Sally and three of her friends out to dinner before taking them all to the Greyhound station. One of the young women is totally flirty with Don, and Sally is repulsed. There is a huge debate going on in the comment space about whether or not Don was also flirting with this young lady. I do not believe he was. At the station, Don tells Sally that he didn’t want to humiliate the girl. He also tells Sally that she is like her parents, despite her wishes to the contrary, and that she is a beautiful young woman, and she has to become more than that. What a moment.

Glen meanwhile comes back to the Francis home on his own and makes a pass at Betty in the kitchen. Here, Betty’s response and intentions are less detached than Don’s were to Sally’s friend. A certain thorniness hangs in the air. When he asks her why she won’t kiss him, Betty doesn’t say because she is old enough to be his mother. She declares, “Because I’m married.” Which is something you’d tell a same-age or older suitor. I think the Glen-Betty oddness is steeping in reality, a young boy becoming infatuated with an older woman. Sometimes they do not grow out of it.

I have to say, I choked up when I realized that we will never know if Glen Bishop came back from Viet Nam. The end of an era indeed.

So, Don. Roger asks him to write a speech about the agency’s future, one Roger will deliver at a meeting in the Bahamas. I could see Don going, but he hasn’t expressed any desire to. Speaking of going, is Peggy going to get to Paris or did that plan fall through?

As much as I’m trying not to play the ‘how will Mad Men end’ game, I am starting to concoct scenarios and last shots in my head. But the most promising one is too close to this week’s storyline, which, of course, will be irrelevant four episodes from now. Four, not three. Only four!