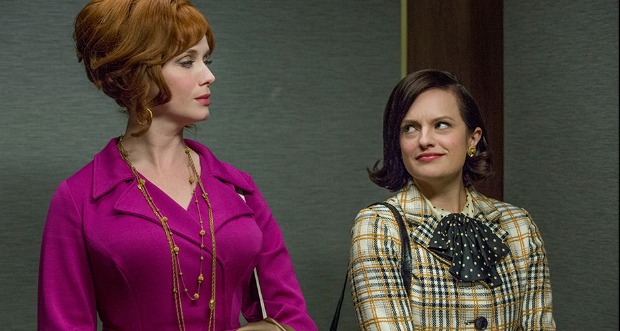 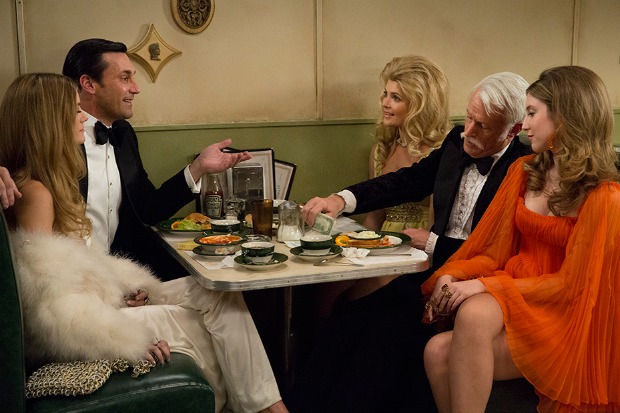 Before: It’s just a TV show. So why do I feel so bereft? Because like for so many fans, “Mad Men’s” characters’ sweeping themes have gotten under my skin. The passage of time, self-determination vis-a-vis identity, shifting personal dynamics (Don and Joan, anyone?), the role of work in our lives and the immutable fact that all things must end. There is a mass anticipatory grieving session underway among the chattering class, as well as a private one in my own little head. This was my parents’ era! They let us stay up late to watch the moon landing! My mother had the same yellow mixing bowl as Betty Draper! And now, my father’s a decade gone, my mother’s slipped into the fog of dementia. I’ll almost surely never feel so close to those times again.

I went to New York two weeks ago, to see the “Mad Men” exhibit at the Museum of the Moving Picture in Astoria, Queens. (It’s super easy to get to, it’s just a few blocks from the 34th Street Station on the R line.) It’s worth going if you can. It runs through June 14th, with reconstructions of Don’s office and the Draper’s Ossining kitchen, assorted costumes and props, the writer’s room where Matthew Weiner and team brainstormed and storyboarded the show, and videos that loop different scenes and songs and, in one, commentary from Matthew Weiner. For a fan, this is as close to a pilgrimage as it gets. That evening, I attended a screening of “The Apartment,” the 1960 Billy Wilder film starring Jack Lemmon and Shirley McLaine. It’s one that influenced Matthew Weiner. He gave a short introduction. If you can’t make the exhibit, here’s an online guided tour. 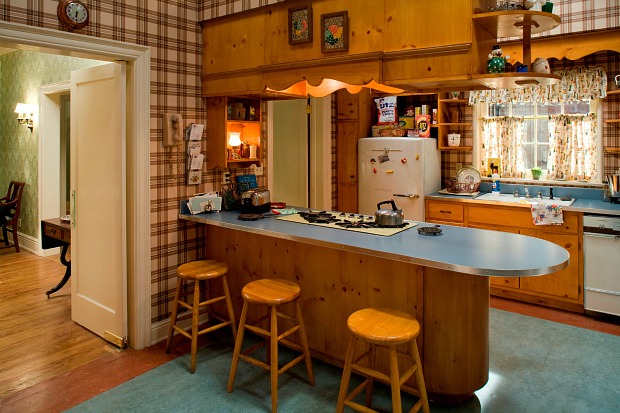 I try not to play the “Mad Men” guessing game. Will Don die? How will the series end? I do wonder what the final song will be. Maybe Pink Floyd’s “Dark Side of the Moon” or something classical, Chopin perhaps. Here I go again, feeling bereft. Pretty soon we won’t be able to play this game. We will know.

After: I am writing this without benefit of having read a single recap, so I have no idea what folks are emphasizing about “Severance,” the return episode of Season 7’s final seven. I begin with Don and Joan, the two characters that seemed most off and unmoored in this episode. Don is not only back to his manic copulating ways, supported by a phone service that takes messages from the ladies, he seems to have lowered his standards. The company he’s keeping is an assortment of floozies, not on the order of, say, FAY LAST NAME. And the waitress, the one Roger gave a $100 tip? She codes mentally unbalanced or damaged beyond repair. And therein lies the attraction. He doesn’t know it, but I think Don thinks he knows her because she’s an extension of himself. 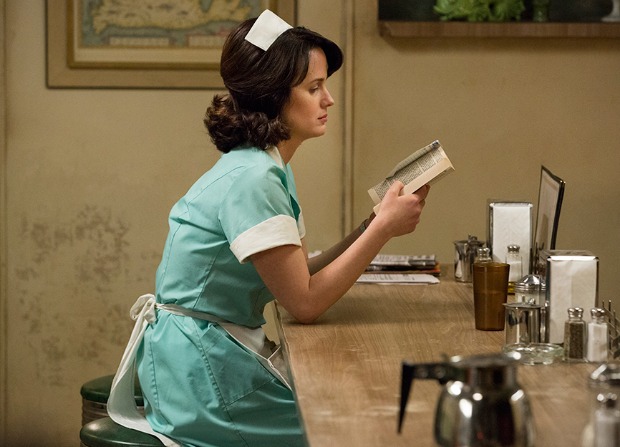 As for Joan, she certainly is not her sweet self, a character-development riff on Bert Cooper’s sendoff, “The Best Things in Life Are Free.” The McCann buyout made her fabulously wealthy, yet we’ve never seen her so hiss-eyed and sharp-tongued and just plain mean. The exchange with Peggy in the elevator, after the preposterously sexist meeting with three McCann lads, that ends with one telling her she should sell bras, her rude tone with her secretary who doesn’t know a caller’s first name, and, finally, pretending when she was trying on an exquisite dress, that she had never worked in the department store. 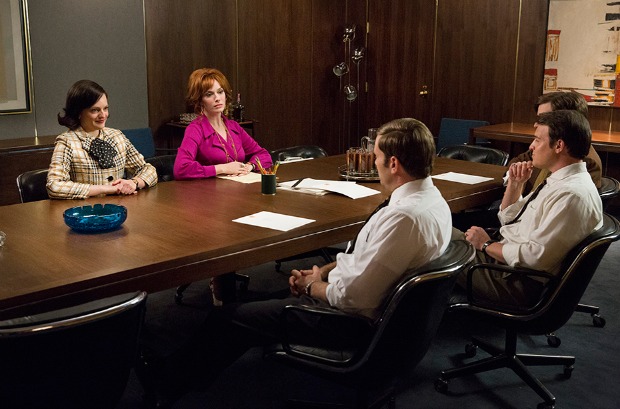 Prompted by a dream, Don seeks out Rachel Menken for a legitimate business meeting, triggered by a discussion about placing Topaz pantyhose in a department store, only to learn from Meredith that she had died last week. (That Meredith has grown into one assertive secretary. No more swooning over the boss from this spitfire. Give that girl her own show! But where is Dawn?) Rachel hasn’t been around since Season 2, when she and her husband bumped into Don and Bobbie Barrett at the 21. Yet like Sal Romano, Rachel cast a long shadow over the seasons, with viewers pining for their return and many opining that Rachel was Don’s true match. It was brilliant to bring Rachel back, and poignant that she’s died, but let’s hope each remaining episode doesn’t start feeling too epilogue-y. That’s one risk of a character-driven show in its final leg.

I can’t skip the mustaches. I don’t care how historically authentic Roger and Ted’s are, I don’t know if I can stand looking at them for six more episodes. (While the show aired, I couldn’t help but think two more and we’d have a barbershop quartet.) Mustaches aside, Roger seems content, as does Pete. And Ken, though he’s swirling in undefined ambition. Who gets the best storyline this episode! He’s going to quit, at the urging of his wife, so he can write. Then he gets fired. And instead of taking his severance and writing, he accepts a job with Dow – a position that opened up in the shuffle that followed his father-in-law’s retirement — and declines his severance from SC&P. He’s going to be a client. This is one of the funniest turns on “Mad Men,” even if we don’t get to see Ken anymore. (Which we may. You never know with “Mad Men.”) 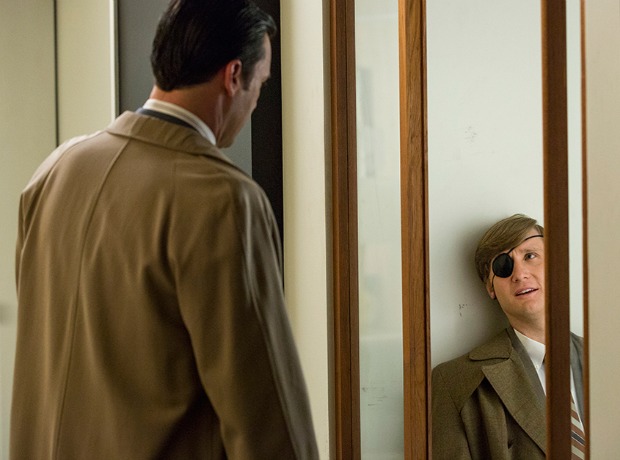 Watching Peggy fall for a fellow over a dinner was exceedingly entertaining. I wonder if we get to see Peggy in Paris? (I’m trying hard here not to play the “Mad Men” guessing game.) She has hope, unlike her colleague Joan. I love watching how confident and poised these two have become. The 1970s were much kinder to female fashion than the fellows. 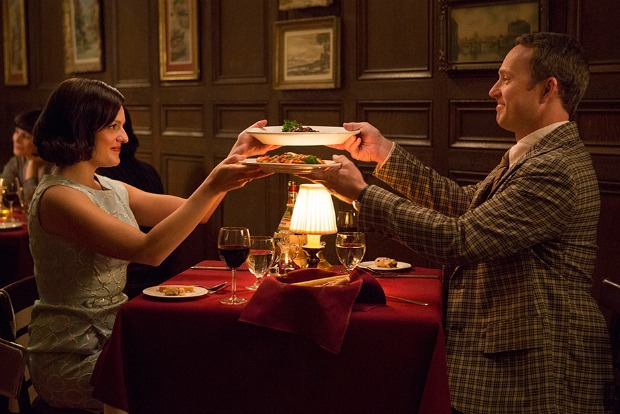 And back to Don. He hooks up with the waitress who was reading Dos Passos in the coffee shop. It’s so odd, her pull for him, that doomed allure. Will this continue? Will we see her in something other than her waitress uniform? The final shot is a stunner, Don at the counter, the camera pulls away very slowly and it’s all very Edward Hopper. “Is That All There Is?” plays in the background. A great ending. In contrast, I didn’t think the opening scene worked, with Don at a casting (the shots are tight, and we don’t know for a bit if Don is alone with the woman or not), and Peggy Lee’s song playing, it didn’t work for me. The episode did as an episode. We may never know if that’s all there is, but for “Mad Men” at least, this is it. 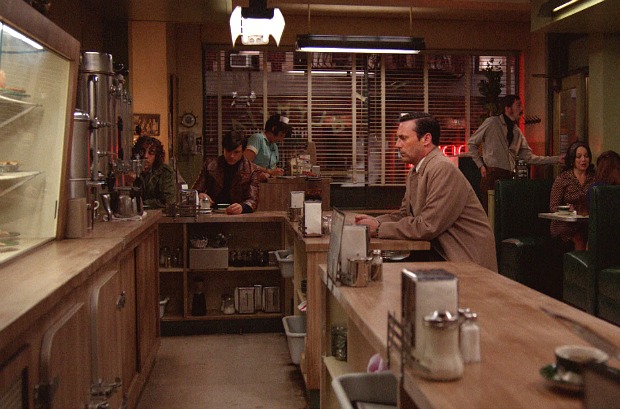