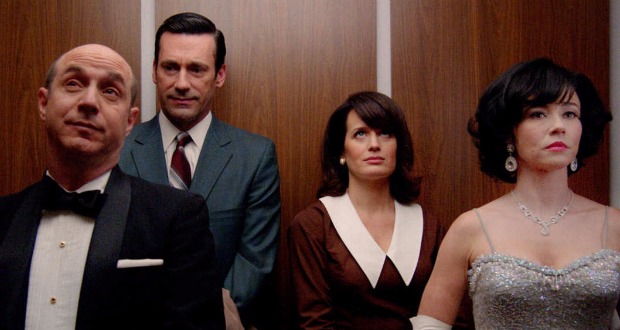 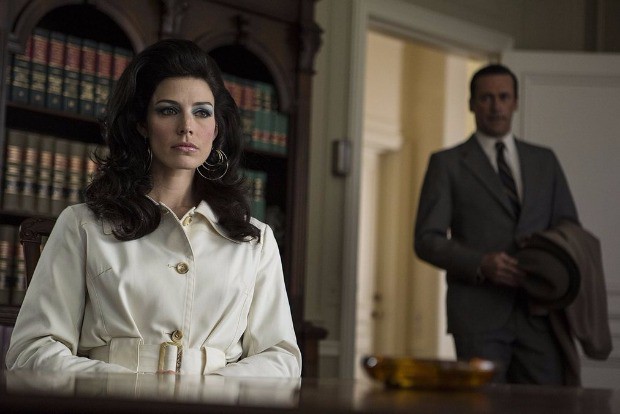 Timing is everything, as this week’s episode of “Mad Men” reminds us. The sixth-to-last show in the seven-season series is taking a beating in the social and recap space for spending too much time on characters old and new, including a forlorn waitress named Diana, played beguilingly by Elizabeth Reaser. She’s an enigmatic character who had she been introduced back in Season 4, the last time Don was between wives, would likely have captured our imagination. (I’m assuming he is not going to die at the end of the series and that he will, ever the nuptial optimist, marry again; after all, he did get Anna Draper’s wedding ring back.)

Unfortunately, it doesn’t work at this juncture. This viewer didn’t have the emotional energy to invest in yet another character, even as it related to Don. It’s Thursday of a one-week vacation, people.

What happened with Diana was this: After she disappears from the diner where Don first met her, he asks the diner’s owner to let him know if he finds out where she works. He calls Don, at the office, and Don goes to her new job, a classier restaurant. And he gives her his card. And she calls. And she goes to his apartment. The next morning, Don discovers a dazed Diana in Sally’s bedroom, she tells Don that she lied to him. “Already?” he asks. There is a child, a daughter, who died of the flu. That evening, at her forlorn apartment, she tells him that she lied again. There is a daughter who died, and another one who is living with her father, Diana’s ex-husband.

Then there was Megan and, for the first time ever, her sister. Like many audience members, I thought Megan’s sendoff, if we even had one, would be much less involved. Instead we got a soap operatic return to New York City, so she and Don could finalize their divorce, with her sister and mother along to support her and to help her move her remaining possessions, just a few, out of the marital apartment. Yes it is true that divorce makes sane people crazy, and crazy people crazier, and lawyers only exacerbate that, but some of the lines and antics that accompanied this storyline made me feel like “Mad Men” was channeling “Dynasty.” Megan’s mother says she hates what this man has done to their family and wonders, in French, after she notices the red-wine stain on the bedroom carpet, if he didn’t give Megan the clap. The three of them going back and forth between French and English charges their exchanges with even more drama.

In Don’s apartment, Megan’s sister flees after a nasty comment from Megan, and Megan goes out to meet Harry for a business lunch, leaving Megan’s mother Marie alone to tend to the moving. (And tend she does!) Megan’s hoping Harry will help her find a new agent. At lunch, Harry propositions Megan in that great entertainment business quid pro quo – he’s got a room for the two of them upstairs — and she won’t have it. She scarfs down her wine and sashays out of the restaurant in a baby-doll-minidressed, high-cheekboned huff. It’s hard to know whether there was feminist symbolism in this rebuff, since Harry isn’t the most sexually appealing character. But still, I couldn’t help but contrast Megan’s response to Joan’s. Megan’s finances are not secure. Not yet.

Megan meets Don at the lawyer’s office, and gives him hell. Her fury is stunning, since she seemed to want the marriage to end more than Don did. I chalk that up to the temporary insanity of divorce, coupled with her career frustrations and financial insecurity. Which is about to change. Don does the improbable. He writes Megan a check for $1,000,000. She scoffs, thinking he’s not serious. When she realizes he is, she takes the money and, well, if not quite runs, exits triumphantly. She is set for life, and she knows it. (In today’s dollars, this would be more than $6,000,000.)

Meanwhile, back at Don’s apartment, Megan’s mother has been busy instructing the movers to remove everything. (Megan was only going to take a chair and a few other things.) When the movers ask for more money, she calls Don, who is out, and then Roger. “And bring cash!” she instructs him. Roger complies, not knowing the details of the move. Later, back at their hotel room, Megan’s sister tearfully tells Megan that their mother has run off with Roger, she’s torn up her airplane ticket and is staying in New York. Where that goes is anyone’s guess.

Back at the office, a 50-something creative icon improbably named Pima, gamely played by Mimi Rogers, is slithering around Peggy and Stan’s world. Pima makes a pass at Stan, and he succumbs. She makes a pass at Peggy, too, but she rebuffs her. Pima is supposed to be some artistic genius, but Peggy sees through it, and calls her a hustler. At home, Stan is seeing a nurse, who is seen in her uniform in every scene. Which makes me wonder about Diana, who is in her waitress uniform in many scenes, including in the elevator when Sylvia and her husband Arnie ride up together with them, in what just might be our last time seeing Sylvia. (But this is “Mad Men”! We never know!) Suddenly, “Mad Men” has a thing for women in uniform.

Diana breaks things off with Don, she doesn’t want to feel again and she is feeling something for him, and he returns to find his apartment empty. That last shot is gripping, Don entirely alone in a barren apartment, quite a contrast to this episode’s opening shot of Don with his two sons in the Francis kitchen. He’s standing at the blender, making the boys milk shakes. Betty arrives home, and they banter. She tells him they’ve been at dinner with the president of Fairfield University, and that she is going to start a master’s program, in psychology, there in the fall. She clearly wants his approval, or some level of experiential involvement. Henry enters, and suggests that Don stay, but Don refuses to speak to him. A loaded scene, that.

I really, really did not like this episode when I watched it air on Sunday. It felt so off, so miscalculated, I had trouble falling asleep! I attribute this reaction largely to the promotional buildup to the final seven, with Matthew Weiner telling us in interview after interview that they were going to focus on the central characters in the final episodes. That said, after watching this episode again, this time without commercials, it simply felt uneven. The Diana storyline just doesn’t work – at least not for now. We’ll have to see how it fits into the final stretch.

As an FYI, this recap was informed by Twitter, where I madly follow the #MadMen hashtag, and Reddit, where I dip into the AMC Mad Men subreddit, and the headlines of several recaps, which are pretty much unavoidable.

I’m loving watching Stephanie Drake’s star rise. She of course plays Meredith, Don’s current secretary, and fans (including me) are hanging on her every line. Good for her! “Mad Men” can be hysterically funny.

In this episode, the scene with Roger and the two secretaries, Caroline and Shirley, trying to make a phone call was a gem. (Is he an NAC? NAC? No Afternoon Calls. Assigned to those who drink too much at lunch.)

Otherwise, I had a few furniture-related observations in the past week. For all the books on “Mad Men,” where are the bookcases? I can’t imagine this is a public-library crowd.

I’ve also been mulling all those lamps. I wish someone with more time on their hands would create a tribute to the Lamps of “Mad Men.” So many rooms have these great pairs of lamps. Even Stan’s!