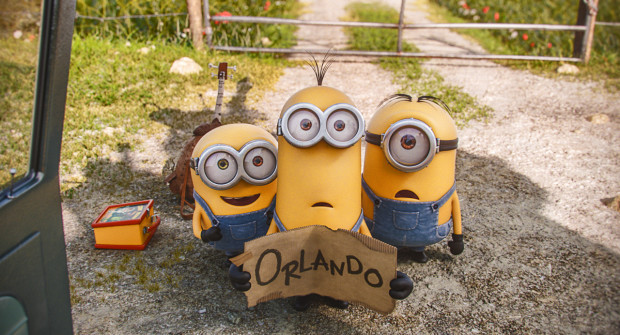 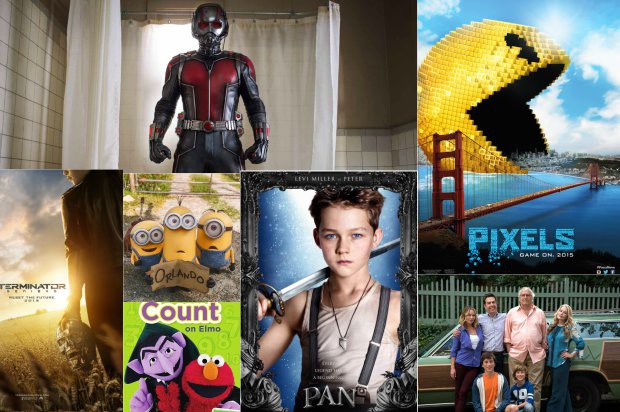 New movies this month include a brand new “Terminator” thriller, more of those adorable Minions, and some intergalactic aliens in “Pixels.” Here’s a sneak peek at what’s new in theaters and on DVD and Blu-ray this month. Note that release dates are subject to change.

Everything old is new again! This fresh installment of the “Terminator” franchise finds John Connor (Jason Clarke), leader of the human resistance, sending Sgt. Kyle Reese (Jai Courtney) back to 1984 to protect Sarah Connor (Emilia Clarke) and safeguard the future. You remember that, right?

But what we didn’t realize is that an unexpected turn of events created a fractured timeline. Now, Sgt. Reese finds himself in a new and unfamiliar version of the past, where he’s faced with unlikely allies, including the Guardian (Arnold Schwarzenegger), dangerous new enemies, and an unexpected new mission: To reset the future. Directed by Alan Taylor, this movie also stars J.K. Simmons and Matt Smith.

In this provocative psychological sci-fi thriller, a wealthy man (Ben Kingsley) dying from cancer undergoes a radical medical procedure that transfers his consciousness into the body of a healthy young man (Ryan Reynolds).

But all is not as it seems when he starts to uncover the mystery of the body’s origin and the organization that will kill to protect its cause. Directed by Tarsem Singh and written by Alex Pastor and David Pastor, this movie also stars Victor Garber, Derek Luke and Michelle Dockery.

Those adorable minions are back! At the dawn of time, they began as single-celled organisms and evolved through the ages, serving the most despicable of masters, from T. Rex to Napoleon. But the yellow creatures fall into a deep depression when they find themselves without someone to serve. So one Minion named Kevin — alongside teenage rebel Stuart and lovable little Bob — embark on a thrilling journey to find their next potential master, Scarlet Overkill (Sandra Bullock), the world’s first-ever female super-villain.

The next evolution of the Marvel Cinematic Universe brings a founding member of The Avengers to the big screen for the first time. Armed with the ability to shrink in scale but increase in strength, master thief Scott Lang (Paul Rudd) must embrace his inner-hero and help his mentor, Dr. Hank Pym (Michael Douglas), protect the secret behind his spectacular Ant-Man suit from a new generation of towering threats.

Against seemingly insurmountable obstacles, Pym and Lang must plan and pull off a heist that will save the world. Directed by TK, this movie also stars Judy Greer, Bobby Cannavale, Michael Pena, and John Slattery.

Directed by Bill Condon and based on Mitch Cullin’s novel “A Slight Trick of the Mind,” this movie begins in 1947 when an aging Sherlock Holmes (Ian McKellen) returns from Japan, where, in search of a plant with powerful restorative qualities, he has witnessed the devastation of nuclear warfare.

Now in his remote seaside farmhouse, Holmes faces the end of his days tending to his bees with only the company of his housekeeper (Laura Linney) and her young son, Roger (Milo Parker). Grappling with the diminishing powers of his mind, Holmes comes to rely on the boy as he revisits an unsolved case which forced him into retirement, and searches for answers to the mysteries of life and love – before it’s too late. Also stars Hattie Morahan, Patrick Kennedy, Hiroyuki Sanada, Roger Allam and Colin Starkey as John Watson.

Those classic childhood characters created by J.M. Barrie get a fresh take in this movie directed by Joe Wright. “Pan” follows the story of an orphan boy (Levi Miller) who is spirited away to the magical world of Neverland.

There, he finds both fun and danger, and ultimately discovers his destiny — to become the hero who will be forever known as Peter Pan. Also stars Hugh Jackman as Blackbeard, Garrett Hedlund as Hook, Amanda Seyfried as Mary, Cara Delevingne as Mermaid, and Rooney Mara as Tiger Lily.

Directed by Jake Schreier (“Robot and Frank”) and based on a book by “The Fault In Our Stars” author John Green, “Paper Towns” is a coming-of-age story centering on Quentin (Nat Wolff) and his enigmatic neighbor Margo (Cara Delevingne), who loved mysteries so much she became one. After taking him on an all-night adventure through their hometown, Margo suddenly disappears, leaving behind cryptic clues for Quentin to decipher.

The search leads Quentin and his quick-witted friends on an exhilarating adventure that is equal parts hilarious and moving. Ultimately, to track down Margo, Quentin must find a deeper understanding of true friendship and true love. Also stars Austin Abrams, Halston Sage and Justice Smith.

In “Mission: Impossible – Rogue Nation,” Paramount Pictures’ fifth installment in the franchise, Ethan Hunt (Tom Cruise) and his team return for yet more death-defying stunts and amazing gadgetry. Their mission (should they choose to accept it)? Eradicate the Syndicate – an International rogue organization as highly skilled as they are, committed to destroying the IMF. 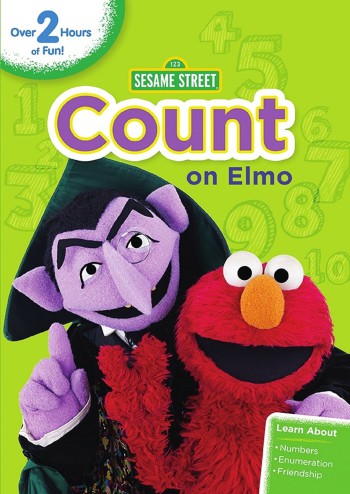 Elmo, Grover, Abby and Cookie secretly nominate Count von Count as The World’s Greatest Counter. When the Nobel Counting Prize committee arrives to give him the prestigious award, the Count is nowhere to be found! So his friends step in and do their best Count impression, but can they save the day? Little ones will learn different math concepts while celebrating the Count and his love of counting. Bonus features include the full-length video “Preschool is Cool: ABCs with Elmo” and “Elmo’s World: Friends” episode.

When Clawdeen Wolf gets the chance to apprentice for the legendary fashion designer Madame Ghostier, she and her best ghoul friends pack their bags and hop on a plane to beautiful Scaris, France. As Clawdeen competes against two worthy opponents, Skelita Calaveras and Jinafire Long, her pals Frankie Stein and Rochelle Goyle uncover clues to a spooktacular secret hidden deep beneath the cobblestone streets. Bonus features include “Ever After High Special: Legacy Day” and “Ever After High Special: True Hearts Day.”

POKEMON: GIRATINA AND THE SKY WARRIOR

Deep in the heart of a mysterious forest, a Pokémon named Shaymin stumbles into the midst of a battle between two powerful Pokémon, Dialga and Giratina. Ash and friends meet up with the feisty and sharp-witted Pokémon and discover that its journey and their own share similar themes — love of nature and all living things, and exploring the fragile line between humans and Pokémon. Adding to the adventure is the appearance of Regigigas, a super-powerful Pokémon with a frosty demeanor and legendary status.

Adapted from the beloved novel by Walter Farley, this 1979 family classic was hailed by some critics as the greatest children’s movie ever made. A visual feast from start to finish, the timeless tale of “The Black Stallion” centers on a young boy named Alec (Kelly Reno) who survives a shipwreck and is stranded on a deserted island with a graceful black stallion, with whom the boy develops an almost empathic friendship. After being rescued and returned home, the two make a winning team as jockey and lightning-fast racehorse under the tutelage of a passionate trainer, played by Mickey Rooney (who was nominated for an Oscar). Beautiful cinematography, breathtaking race scenes, and a delightful story make this a timeless family movie. Teri Garr and Hoyt Axton play Alec’s parents.