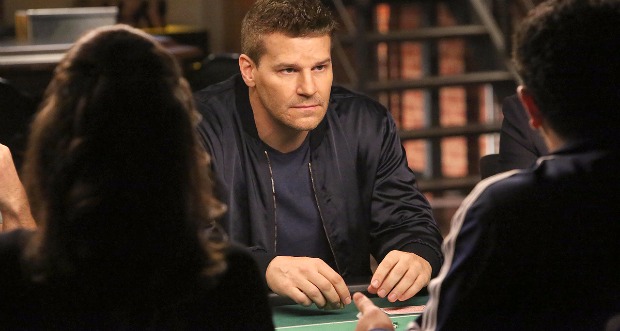 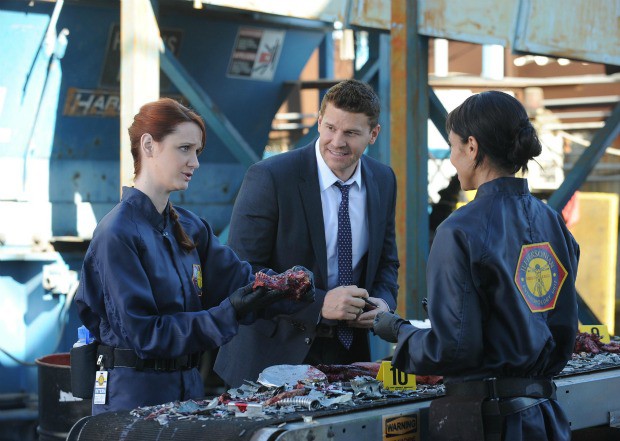 I’m back from vacation and rejuvenated – but I am behind with my recaps. For those of you who read my “Revenge” and “Bones” recaps, please feel free to leave comments as to how you feel about the last two episodes of each show (that I missed). It really is great hearing your comments!

First of all, how cute was Booth showing his excitement for another pregnancy? I laughed when he did the somersault over the bed (I used to be able to do that), and then when he brought all of the coffees to the crime scene. Lol, it was nice to see the fun-loving Booth we used to see in the early days of the show.

It was also rewarding to see Brennan’s thrill about being pregnant again (as fans, we all knew – and now we can see it – she has the pregnancy glow), although she doesn’t want her co-workers to know yet… sorry Brennan, you can’t pull the wool over Angela’s eyes. I thought that was a funny trick, “Give me a hug…” The sore boob trick! Angela won’t tell anyone in the lab. I’m surprised they haven’t guessed already – they have all noticed that both B & B are very cheerful, even Cam commented on it.

The storyline with Hodgins and Jessica was cute. She suggests to Hodgins (after he breaks some beakers) that he should invent an unbreakable beaker. It was her idea, but Hodgins brainstormed to make the product – in his own house, not at the lab – which Cam made clear is a no-no. More later.

Side note: Remember how much we all disliked Cam at the beginning of season 2 when they introduced her as Booth’s longtime friend and lover … we all wanted B & B together, but it was way too early in the series. What I’m getting at is, we all love Cam now. She’s professional, yet caring, and is amused by Brennan. She’s been a great character on the show. I just hope they bring back Arastoo and we get another wedding, don’t you?

To the case: a guy in a shredder … they always seem to top themselves on the grossness of the victim’s death; yuck! The flattened face made me both wince and laugh – that’s the beauty of a comedy-drama…

The bad news regarding the case is that the victim, Jeff Dover, was a gambler. Booth decides he needs to get into the poker game that Jeff regularly attended – we all knew that was a bad idea. An addict is an addict… it’s very hard to stay clean, no matter how “strong” one is (as Booth kept telling everyone, including himself). Both Aubrey and Bones didn’t like the idea of Booth taking part in the game – both were very concerned about Booth having a relapse. I really liked how they had Aubrey’s character go on the offensive, talking about additions and bringing up his own father’s addiction to the stock market. It made it real. Booth, unfortunately, didn’t listen.

After staying out late the first poker night, he returned to a frustrated Brennan. She asked why he stayed longer than needed. He had an excuse and dropped a huge wad of cash on the kitchen counter. Oh boy, we all knew what was coming.

Later, after Booth arrests a fellow poker player for the murder of Dover, he comes home and gets a call – from his addiction “sponsor,” he says. At first I thought, “good for you Booth, take charge.”

Unfortunately, it wasn’t his sponsor, it was his old bookie, and Booth makes a $200 bet. Oh no. Actually, this will be a good story to follow. Something that will bring out emotions for all and be a conflict between he and Bones… especially while she is pregnant. I see some rough waters ahead.

Hodgins creates a mat to keep the beakers from breaking when they fall onto the floor. I think this is the way for Hodgins to regain (at least I’m hoping) his wealth back. He and Angie deserve it!

Booth and Brennan: “It was the kitchen floor that night, after the bottle Brunello.”

Aubrey’s concern for Booth, even telling him he would take a bullet for him.  Awww…