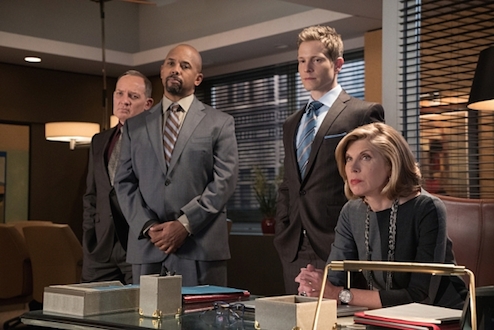 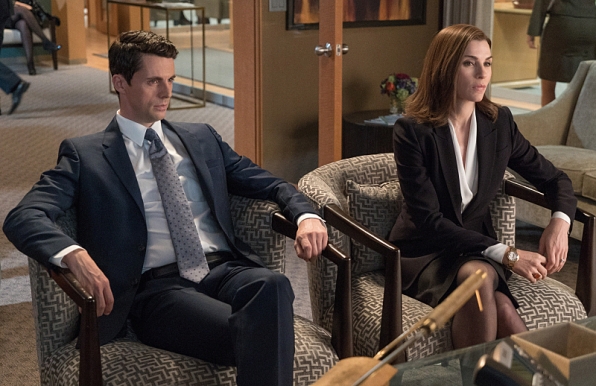 It’s a new day, good-wifers, and Madam State’s Attorney has arrived. I’ve written before about how “The Good Wife” is all about appearances. Well, that concept is hugely put to the test in this action packed episode, as Alicia figures out what to do next, and how to appease all the people who helped get her to her new position.

Since winning the election last week, Alicia is welcomed back to Florrick-Agos-Lockhart with a round of applause, while behind her back David Lee and Julius Cain (Michael Boatman, who hasn’t been on the show for a while) argue over which of them will get her office. Thus begins all the secrets and backstabbing.

Alicia gets visits from three heavy hitters, all making demands on her new position. First, outgoing SA Castro (Michael Cerveris) asks her not to investigate him, and requests that she keep his deputy on as her Number 2. Then, Guy Redmayne (Ed Asner), the absolutely repugnant womanizer who heavily funded her campaign, enters in a blizzard of sexism, racism, and disgustingly inappropriate behavior, and suggests some friend of his as her deputy. Lastly, Lemond Bishop comes in asking Alicia to quash Geneva Pine’s investigation into him. Alicia, disgusted and frustrated by the demands, tells all three of them “no.”

That is, until Eli comes in yelling at her. He can’t believe she would actually say no to these people, to their faces. She doesn’t have to say yes, but these are powerful individuals, and she needs to tell them what they want to hear. “Absence of yes, times time, equals no,” Eli explains, and gives her a mantra to tell them: “All options are open to me, and I plan to decide in the next 48 hours.” So she calls the three men back in to clear the air and keep them on her good side. We’ll see how much more trouble is caused in the future—especially with Bishop, who responds to Alicia’s mantra with a veiled threat.

Always multitasking, Alicia also hired Finn (Yay Finn!) to negotiate her exit package from the firm she started not that long ago. She’s insisting on at least a half million dollars, but (Florrick-)Agos-Lockhart (-Lee-Cain?) are offering half that amount. Both sides know that Alicia doesn’t have much leverage, but she’s going to try anyway. I admit it always bothers me when they throw around such ridiculous numbers like it’s nothing (because to them, it is nothing).

Alicia also decides to offer Finn the coveted deputy position as her Number 2. He doesn’t seem that enthralled by it—and my imagination went wild, thinking he won’t take the position because his attraction to her will be a liability. But he says no such thing, of course, and agrees to think about it. Eli thinks it’s a terrible idea, natch. But when Eli later recommends someone else for the position, Alicia throws his mantra back in his face. Good for you, Alicia. We can’t say she doesn’t learn quickly.

In the latest of “The Good Wife”’s ripped-from-the-headlines stories, the show takes on illegal downloading, and the recent Sony email hack. Cary and Diane are in depositions for a case of copyright infringement against a major tech company, WharfMaster, for offering a movie for illegal download two days before its theatrical release, thus losing the filmmaker lots of money in ticket sales. FAL doesn’t have a great case, with the tech giant’s lawyer heading them off at every turn. But as they continue to fight, Alicia learns from Grace that someone hacked into FAL’s computer system and released their private emails from the past four months to a website. Alicia’s emails happen to be safe, because she had switched to her campaign email at that point—but that’s only for now. The hackers, who are doing it in support of WharfMaster, have threatened to release emails from the past two years if the case isn’t dropped.

This is a huge threat to the firm. There are too many emails that will just look really, really bad if they get out. Alicia asks Marissa to go through her emails with a keyword search (including the word “albeit,” apparently), and she pulls out a big stack of problems, just to start with. These lawyers say a lot of catty, negative, and occasionally salacious things about their clients and each other (the latter at least between Alicia and Will), and it’ll be a serious poop-storm if more of these get out.

When Diane and Cary ask the filmmaker to settle, he refuses, with the lofty ambition of putting WharfMaster out of business. Diane instead tries to drop the case, but he refuses to let her. It’s only later, after WharfMaster demands a public apology from the filmmaker for suing them—despite that their CEO is caught lying under oath—that the filmmaker agrees to the settlement. Apparently his email was hacked too, so now he’s willing to cave. It’s always a different story when it affects you personally.

But goodness me, do these released emails wreak havoc, acting as the Yoko Factor to the already stressed-out law firm. Pretty much all the lawyers are at odds, yelling, fighting, even spitting at each other (that’s particularly gross). I’m not sure how they’re going to recover from this, even though they stopped the release of more emails. Julius even tries to apologize for calling David a fruitcake (though frankly I’m not sure why), but David will have none of it. (Zach Grenier and Boatman sure had a blast fighting with each other though.)

What’s worse, the hack caused such damage that FAL now needs to buy a new computer system and network, including cell phones and laptops, and is forced to drop their price on Alicia’s exit package even more. Alicia responds with a not-so-veiled threat to take it out on their future clients. Not cool, Alicia. Is she already headed down the not good path that Castro, Peter, and Childs have taken before her?

A few extra thoughts:
– Marissa pulled a Dwight Schrute and gave herself a promotion, in title at least, calling herself Alicia’s Executive Assistant. But unlike Dwight, Awesome Marissa actually deserves it.
– It’s interesting that Redmayne’s daughter seems to be ignoring her father, and also annoyed with him. I’m glad (relieved?) to see it, but why put up with it at all? What is she getting out of that relationship? I also admit I thought Bishop should perform one last hoorah before retiring and take Redmayne out of the picture. That would be something…
– It’s confirmed: Alicia had at least a one-night stand with Elfman, and she calls it as much in an email. But has he really left?
– Holy Fifty Shades of Emails, Batman! Did you pause and read the ones shown, like I did? Those are ridiculous. I don’t believe that Alicia and Will would write such things to each other on company emails. Also, weren’t they already finished with their relationship by then?
– David Buckley’s music is still fantastic. Bits of this score remind me of Marin Marais’ Folies d’Espagne improvisations, and my mother (a professional cellist) pointed out that the music from the brilliant “Mind’s Eye” episode was reminiscent of a Schubert Piano Trio.
– Marissa tells Grace about her stay in Jerusalem, disillusioning her about how wonderful it is, instead saying simply, “it’s hot.” Is Grace actually considering going to Jerusalem?

So what did you think, good-wifers? How long before Alicia gets dragged into the gross politics of the SA office? Do you think Finn will accept her job offer? Or will Alicia try to back out of it first? Will FAL recover from the huge mess caused by the emails? Share your thoughts in the comments.