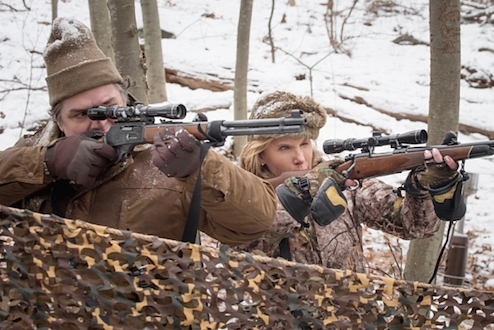 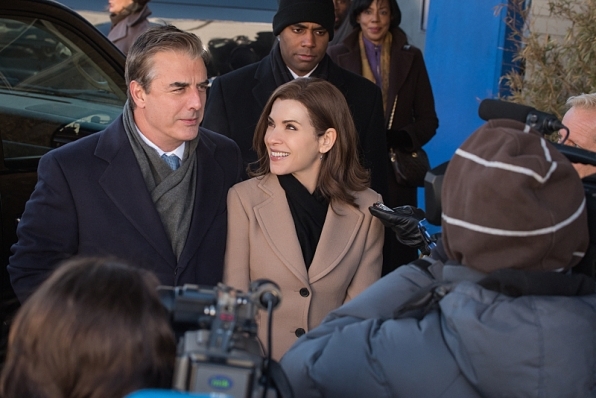 Well good-wifers, it’s finally Election Day on “The Good Wife,” and Alicia and Diane both go in for the kill: Alicia only figuratively, but Diane literally as well, while on a hunting trip with Kurt and his uber-rich buddies.

As mentioned last week, Diane joins Kurt for a 3-day hunting trip in Wyoming with some of the country’s richest men. While dreading the company of the world’s most conservative Republicans, she learns that there are at least two potential clients she could hunt.

She first sets her sights on Gil Berridge (James Snyder), the creator of a search engine competing with ChumHum. When Diane learns from Cary and David Lee that Gil worships his wife and takes her advice on everything—and since Diane’s forced to enjoy a spa day with the ladies anyway instead of hunting with the (sexist) men—she sets out to woo the wife.

Problem is, the woman there is not actually Gil’s wife. When Kurt makes an excuse for Diane to join him hunting, so she can talk up Gil about all the beneficial things the woman suggested about her firm, she comes on too strong and Gil leaves. But it turns out the issue is not that she came on too strong, but that the woman she was sweetening up was Gil’s call girl, not his wife. (I have to wonder, is “call girl” really the appropriate term here? Would “mistress” or “escort” not be better?)

So apparently Diane blew it. Kurt goes with Gil, and Diane is left with Kurt’s friend RD (guest star Oliver Platt), and they get into a heated but civil discussion about women’s reproductive rights. One of the amazing things about “The Good Wife” is its ability to discuss such taboo topics openly while also showing both sides of the debate. It’s fascinating, and so important on television.

Diane later learns that RD is actually Reese Dipple, the fourth richest man in America, and he too is searching for new representation. Diane feels it’s clearly not worth pitching him as her new client, because she refuses to fight for any anti-choice or pro-life cases. She tells him this much, but he still seems open to her representation. They agree to talk about it when they return to their offices.

While with RD in the blind, he gives Diane her first hunting experience: she shoots a deer and kills it. Later, at the lodge, she is served the deer for dinner. While she seems sad for what she’s done, and uncomfortable with what’s on her plate, she admits to Kurt that she actually liked it. I personally don’t understand why, and I wish she’d explain. Is it just the thrill of the hunt, I guess? I find it sad and disturbing. Incidentally, this is the second show I’ve seen in a week that dealt with non-hunters going shooting for the first time (the other was the “Turkey Shoot” episode of “Schitt’s Creek”). Why is this suddenly appearing in my pop culture now?

Meanwhile, Alicia is at home waiting for the results of the election to come in. Elfman and his sidekick Josh (David Krumholtz)—who is drastically overusing his “blah blah” habit—are still working to get the best result they can, especially after Peter may have jeopardized Alicia’s chances by sounding over confident in her victory. In an interview that morning, Peter told Mandy Post that Alicia will win, which could cause voters to feel that she’s likely to take the election without their help, and they don’t need to show up to support her. Elfman feels that Alicia’s chances are strong, but only if people show up. He and Josh hustle to find someone to do a last minute robocall to get voters out of their houses, but it’s not quite working. How frustrating that wait must be, and how difficult working until the last possible minute to get the desired outcome.

While this is happening, body woman Marissa takes care of Alicia by getting her mind off the election: They play Halo, after Finn had stopped by earlier and given her the game as a present. (Yay Finn!) She sets Alicia up with an avatar (with the obligatory larger bra size), and pulls Alicia away from any decisions Elfman and Josh may want her to make. (I love seeing the women bond while playing this video game.) They eventually find they have an ally online, who turns out to be Finn. (Yay again!)

He has her back, both in the game and IRL, suggesting that she plan something for the next night to get her mind off the election, just in case she doesn’t win (though he’s confident that she will win). When she says, great idea, have dinner with me, he turns around and says he has plans. Wha?? Yes, it is weird of him to suggest it and then refuse, but he discloses that he started seeing someone.

It’s new, and we don’t really know anything more about it, and when Finn says he could change his plans, Alicia refuses. Oh Alicia, I had a different answer all prepared.

But they needn’t have worried, of course, because Alicia does win (perhaps with help from a last-minute speech by Peter, tying up traffic for Prady’s supporters). Natch. Hooray, the State’s Attorney’s race is finally over! Afterward, she meets with Frank Prady and offers him a position as her deputy, but he refuses. He explains that they have different approaches, and he doesn’t feel hers, from a place of pessimism, will work. Ah well. Who knows what Prady has planned next, but I for one hope David Hyde Pierce will return to the Good Wife set.

At Alicia’s campaign headquarters (which look like they’re at the old roach-infested Florrick Agos offices), everyone’s celebrating and Alicia’s making the rounds. Elfman chats with Marissa, who asks him if he’s staying or leaving for another job. He admits that he really likes Chicago, and probably intends to stay. Alicia sees Elfman and is about to go over to him when Peter comes in, so she instead gives Peter a hug. (Got to appease those watching supporters.) Suddenly, Elfman tells Marissa he’s more likely to leave, apparently deciding there is no opportunity for him with Alicia.

How do you know, Elfman? It’s odd that he doesn’t talk to her about it. Does he know her situation? I would think if he did, he wouldn’t be so quick to leave. We don’t actually know what happened after last week, when she invited him into her apartment. The start of tonight’s episode, with them together in the car the morning of the election, implies that it’s the next morning and they were together all night. But we don’t know if that’s true, or exactly what happened the night before. Hopefully we’ll find out in the future, but I somehow doubt it. Besides, he should fight for want he wants. Dummy. I guess he really is weak.

So it’s looking like Alicia will be alone again, since Finn is O.O. (Otherwise Occupied) and Elfman is leaving—at least so far as we know. It remains to be seen of course, and as much as I’m Team Finn, I don’t actually want either of them to leave.

While all this is going on, Kalinda is having her own troubles. She’s still playing chauffeur to Lemond Bishop’s son, Dylan, and being followed by the black SUV. Bishop takes care of the SUV, dragging its occupants out of the car, but the head of the parent’s committee at Dylan’s school sees the incident. They take it out on poor Dylan, and insist that he leave school. Bishop ultimately realizes that his business is irreparably harming Dylan, and he decides to retire. Good thing for incoming SA Alicia—except that Bishop needs them to drop the investigation against him.

Bishop also learns that the SUV is not following Dylan, but Kalinda. Turns out, ASA Geneva Pine is trailing Kalinda, supposedly to get info on Bishop. But it looks like they’re finally ramping up to Archie Panjabi’s anticipated exit, because I suspect Pine is trying to get info about the illegal metadata-doctoring Kalinda did to get Cary out of jail. Uh-oh. I suspect Kalinda is in some serious trouble.

So how’s by you, good-wifers? Do you think Pine is gunning (so to speak) for Kalinda? Is that how her storyline will be resolved? Will Elfman really leave or will Alicia get another chance with Finn? Or will she decide she’s just fine on her own? How will she handle the new State’s Attorney position? Share your thoughts in the comments.