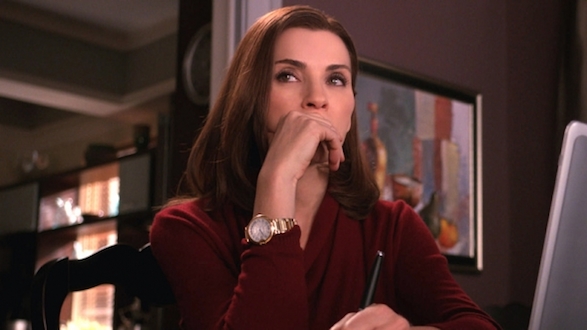 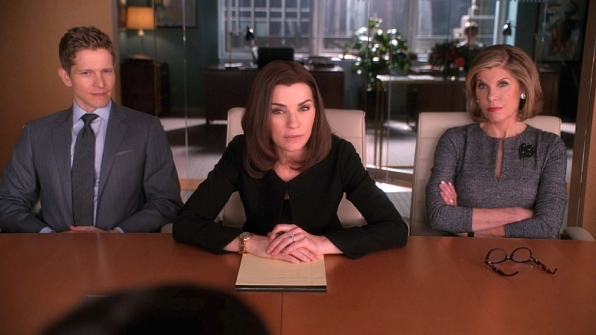 Oh my goodness, good-wifers. I feel a bit like I’ve been hit by a truck. “The Good Wife” is back on top with another stupendous episode. In “Mind’s Eye,” we get a look at Alicia’s thought processes, witnessing incredible moments combined with severe gut-punches, and some fierce trickery too. I’m still coping.

This is apparently a major turning point in the series, as Alicia finally says goodbye to Will and decides to move on. I’m still not entirely sure I want her to. Well, as a constant shipper, I do want her to, but I’m still so sad about it. Alicia also realizes she’s finding her voice, figuratively in terms of her career and the State’s Attorney race, and literally in this episode.

Alicia has a very important interview, one that could give her a two-point bump in the polls. But she also has laryngitis—most emphatically not a cold—from giving too many speeches. Frank Prady has already completed, and aced, the same interview, so the pressure’s on for Alicia to perform well. All she has to do is get her voice back. And get out of her head.

I love this. Her mind plays tricks on her: as she imagines possible scenarios for the several issues she’s juggling, she hears competing soundbites from people who move in and out of her life. As she decides what to say in this career-making interview, she sees Eli, Elfman, and her body woman, Marissa (the wonderful Sarah Steele) telling her why what she just said is wrong. Or right. I was just struggling with this the other day after a quick interaction with someone on public transportation, and it was near impossible to get out of my own head. It’s encouraging that someone as confident and kick-ass as Alicia Florrick has these insecure moments too. The only odd thing is it slows down her thought processes, and I’m sure she’s much faster in making these kinds of decisions. She’s always under the gun, so she must be.

She also learns from Elfman that a blog revealed that Lemond Bishop may have funded Alicia’s PAC (remember that old storyline?), which would clearly look very bad for Alicia’s campaign. While trying to figure out what to do about that, she realizes that maybe Lemond, and Kalinda, don’t want Alicia to win. Could that be possible, or is she just feeling insecure?

Ah, Kalinda. An even older storyline comes back into play as Alicia envisions the Kalinda/Peter relationship in her head. She’s clearly still scarred by this betrayal, even though it’s been years (since season 2), and she even tells herself that she knows there’s not anything between the pair anymore. It’s so great to review, and maintain, the history of the show by bringing this up again.

As Alicia looks at the blog Elfman told her about, a credit card ad automatically starts playing, snapping her back to a previous memory. It sounds like Will. I was thinking the voice sounds familiar, but I didn’t place it right away, fooled by the mundane subject matter into not thinking much of it. I fell right into creators Robert and Michelle King’s ingenious plan.

What a sucker punch! I was already thinking about Will before this came up, and then they go and do this. What a cruel trick, from which I’m still reeling.

Alicia misses Will (as do I) and fantasizes about being with him. Apparently, it’s “been a while,” because she also fantasizes about the other men in her life: Elfman, Peter (who dares ask the ridiculous question of why Alicia can be with others but he can’t), and Finn, which surprises her. I guess she forgot about him (he hasn’t been on the show for a while, which I find disappointing), and doesn’t realize how she feels about him. Hopefully this means he’ll play more of a role going forward, but perhaps not, with Elfman there.

I’m a little sad Alicia’s fantasies with Will are all about the sex, and not the relationship. They were in love after all. But I guess sex is the easiest, quickest way to convey that intimacy while keeping the reveal a secret (and his face hidden). By episode’s end, Alicia realizes Will’s not actually here, and finally bids adieu, apparently ready to move on to Elfman (or perhaps Finn).

Alicia’s also helping Cary and Diane plan their attack for Louis Canning (he’s baaaack!) and his wrongful eviction suit, after Diane cast them out and took the former Lockhart-Gardner (RIP Will), then Canning-Lee, now Florrick-Agos-Lockhart, offices out from under them. I totally forgot that they hired back David Lee, but he’s still in cahoots with Canning, so not trustworthy here. Howard Lyman returns as simultaneous savior and huge liability as they see if they can win this suit. For every solution Alicia’s “mind’s eye” suggests, Lyman, Canning, Lee, Cary, or Diane show the ways it can be unseated, allowing Canning a possible win. She’d rather not settle, as Canning suggests in his call to her that morning, so of course she wants to win.

She doesn’t exactly do that, but things take a turn for the worse as the ailing Canning ends up in the hospital. Alicia goes to see him there, initially hoping to settle the case, but learns from his wife Simone (Susan Misner) that he may not make it through the night. Simone assumes Alicia is a friend, and asks her to pray for him. Given her own struggles with religion, demonstrated in her subconscious through wonderful discussions with Pastor Isaiah and the well-known atheist Richard Dawkins, she feels hypocritical praying for Canning, and asks her faithful daughter Grace to do it for her.

It seems that Grace may be having her own issues with faith, all of a sudden. Alicia receives a text intended for Grace—apparently something that happens when Zach upgrades the phone software (does it?)—from someone named Evan (Almighty?), telling her not to give up on God, who still loves her. Grace replies that she’s “not giving up, just done.” Hm… This seems out of nowhere, and at the very least implies that Grace isn’t talking to her mother about her struggles. It leads Alicia to assume the worst possible outcome for Grace, picturing her as a pregnant, glue-sniffing teen. It goes perfectly with her worst-case scenario of Zach: dirty and homeless on a bench at Georgetown. Sadly, he just misses Alicia’s real-life phone call.

I’ve said this before, but it absolutely bears repeating, especially with this episode: I love David Buckley’s gorgeous, baroque-inspired score. Especially re-watching the series with my husband (we’re mid-way through season 3) and hearing Buckley’s older, more dramatic-pop approach to the score, the baroque-ness draws out a drama that’s unexpected, but much more effective. While there’s actually less of it in this episode, with lots of pop songs instead, the music he writes is beautiful, but subtle, and used so well. The songs he chooses to supplement the action are also great, and they play a bigger role in this episode, smoothly crisscrossing the line between diegetic and non-diegetic, and affecting how Alicia thinks about her current situations. It’s brilliant.

As Alicia heads to her big important interview, she feels more sure of who she is, what she’ll say, and where she stands. Her throat clears up a bit too, and she tells Elfman she’s found her voice. Presumably she’ll ace the big interview. Just in time for the elections next week.

So what do you think, good-wifers? Are you as blown away by this episode as I am? Did you see that sucker punch coming? Who do you want Alicia to be with next, Elfman or Finn? (I’m sure you can guess where I stand there.) Do you think she’ll win the election? Cast your votes in the comments.