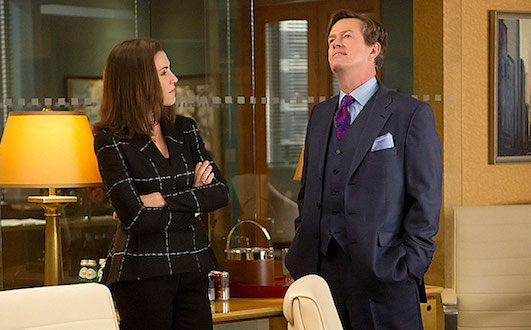 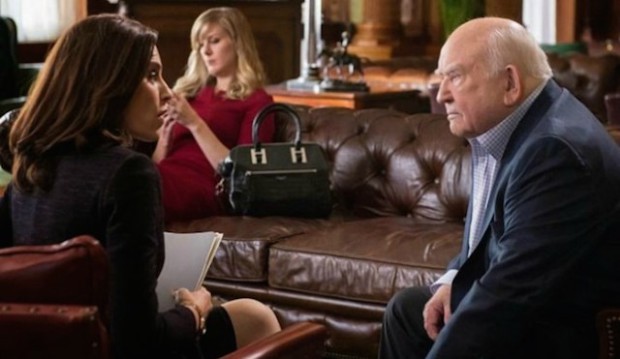 Welcome back, good-wifers! It’s been months since our last episode, but Alicia Florrick and the gang are finally back with a new trial surrounding an old client: our favorite sexy sociopath, Colin Sweeney. The vastly entertaining Dylan Baker plays double duty this week, as Sweeney, and as the actor portraying his fictional doppelgänger in a cheesy television show (and no, not Threat Level Midnight), whose episodes, like “The Good Wife“ itself, are “ripped straight from the headlines.”

With all the talk about “Fifty Shades of Grey,” I suppose it was just a matter of time before “The Good Wife” brought back Sweeney, but I for one do not mind. I usually find him hysterically funny, though I must admit that some of the personal displays of affection tonight between him and his wife Renata, the wonderful Laura Benanti, make me a little nauseated.

Diane and Cary busily, and fairly successfully, defend Sweeney in a defamation case against the television show—that is, until the show’s lawyer (Julie White) turns it into a reinvestigation of his original murder trial. Really? They’re going to try him a fourth time? What’s more, they seem to now be using the television show as proof in the original murder. I don’t know enough about the law, but that seems implausible. I wonder how much this happens in real life, retrying original cases. Did they ever retry OJ Simpson?

Sweeney is frustrated that Alicia, his favorite, is too busy with her State’s Attorney race to help with his trial, so he pulls various ploys to get her involved, such as threatening to reveal the financier responsible for her PAC, and going to the press with the info. She helps out some, but refuses to appear in court or be seen with Sweeney. But it’s OK, because Alicia does ultimately save the day when she notices that the episode displays the ChumHum logo in five different scenes. This constitutes a trademark infringement that disparages the ChumHum brand, forcing the television show to settle and publicly apologize to Sweeney.

Alicia’s having her own problems with her PAC. Her opponent, Frank Prady (David Hyde Pierce), tells her about a homophobic robocall being placed to upper-class conservative neighborhoods, as a backhanded bid for supporting Alicia’s campaign.  She’s disgusted by it and wants it to stop. While discussing it with her campaign managers, they remind her that she’s behind, not in the polls necessarily, but in cash.

This leads both candidates to vie for the funding of the lecherous, sexist, homophobic, foul-talking millionaire, Guy Redmayne (Ed Asner). Boy is he a piece of work. Gregariously making passes at Alicia and tossing off horribly anti-gay comments (not that she doesn’t have her occasional comebacks), and then talking disgustingly about Alicia to Frank in some misguided test to prove (to himself) that Frank is gay. Redmayne is so repugnant, it’s hard for me to fathom that there are actually people like that in the world. Yet, sadly, I know there are. I’ve no idea how his daughter puts up with it. Both candidates are repulsed by his behavior, but Alicia especially feels she needs the money and is not in a position to tell him the truth. I wonder how long that will last. It certainly takes a toll on her, which she reveals in a touching moment with her daughter Grace.

What a trying, frustrating episode this is. Between Sweeney’s lovingly nauseating intimacies with Renata, and Redmayne’s repulsive comments, this episode really gets under my skin. Ick! Truly gross.

Kalinda’s subplot doesn’t help matters and is equally frustrating, as Lemond Bishop calls in the favor she owed him: He wants Kalinda to pick up his son Dylan from school, everyday for the next two weeks. She does, and ends up caught between a rock-father and a hard place-son (the poor boy).

Kalinda discovers that Dylan has a bully: an annoying kid who goes by the nickname “All American Mike” (uh, barf, again). First, Dylan tells Kalinda that Mike told him Bishop had murdered Dylan’s mother. When Bishop asks Kalinda if Dylan had talked about anything during their ride home, she intentionally avoids mentioning this. The next day though, Kalinda sees Mike punch Dylan and knock him down, so she threatens the brat and puts a stop to it. Dylan asks Kalinda not to tell his father, making up some excuse about how he tripped, but of course Bishop sees right through that (leading Bishop to make an interesting comment about how you can tell when someone is a drunk). He eventually threatens the truth out of Kalinda (though why she can’t tell him that Dylan asked her not to tell him, I don’t understand), during a very tense and portentous scene, then forces her to leave. She does, but only for a moment, deciding to return and confront Bishop again. After the explosive potential in that scene leaves us worrying that Bishop will seek retribution against a child, we see Bishop calmly talking to Mike’s mother, who is apparently unaware her son is bully material.

So Alicia has a generous new benefactor for her campaign, but at what price, Kalinda may be bonding with Bishop over how difficult parenting can be (not that Kalinda knows), and Cary seems to be completely back to normal after his trying time in jail.

So what did you think, good-wifers? Does Colin Sweeney amuse you as much as he does me? Was the episode trying and frustrating to you too? Are you glad “The Good Wife” has finally returned to our televisions? Share your thoughts in the comments.