If you know anything about musical theatre, you probably know that there is a musical version of Carrie, the classic Stephen King story. It seems a bit ridiculous. Why would anyone choose to write a musical version of the horror story about an abused girl with telekinetic powers who gets dowsed with pig’s blood at her senior prom? Perhaps that’s why the musical’s main claim to fame is what it is: it is considered Broadway’s most infamous flop.

Certainly Ken Mandelbaum saw it that way, in his brilliant 1991 book, Not Since Carrie: 40 Years of Broadway Musical Flops. His description of the show, particularly its musical number about pig’s blood, still sticks out in my memory despite reading the book more than 20 years ago. So when the opportunity came around to see a production of the show, at La Mirada Theatre in California, of course I had to jump at it.

Full disclosure: I’ve never read King’s book, or seen the movie; either the classic 1976 Brian De Palma film, or the recent remake. I generally don’t watch horror films—yet my favorite musical is Sweeney Todd: The Demon Barber of Fleet Street, the brilliant and hugely successful horror musical by Stephen Sondheim. So why not a musical based on Carrie? 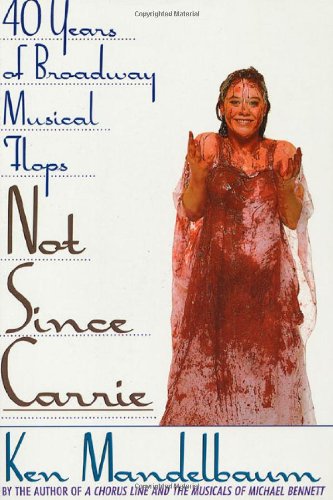 For one, Carrie’s composer, Michael Gore, is no Sondheim—but no one else is. Gore worked with lyricist Dean Pitchford on this, as well as Fame, and I actually enjoyed Carrie’s lovely, 1980s-musical pop score quite a lot, with its frequent waltz tempos and pleasant harmonies. The music is sweet enough that it’s a bit incongruous with the story, but that’s useful for me (someone who scares easily). I also admit that by the end it felt repetitive, with similar sounding tunes being reprised. I assume the story sticks closely to the film and the book, because Lawrence D. Cohen, who also wrote the screenplay for both movies, wrote the musical’s book.

In case you’re unfamiliar with the story, Carrie White (the wonderful Emily Lopez) is a shy, already outcast, 17-year-old high school girl with an abusive, hyper-religious zealot for a mother. Her mother Margaret (Misty Cotton), rather than teaching her about puberty and human sexuality, instead tells her that simply being a woman is a sin, and that people are inherently mean. When Carrie gets her first period in gym class, she freaks out, and her classmates all laugh at her. Thus begins this cautionary tale of bullying and religious fanaticism.

The show starts with Carrie’s classmate, Sue Snell (Kayla Parker), under a harsh spotlight, being questioned about the events that happen at the end of the musical. We know we’re headed for badness—but most of us know that going in anyway (the ubiquitous pictures of Sissy Spacek dripping red told me this without seeing the film). Lights brighten as the cast joins her for the opening number, which dissolves into Carrie in the gym shower discovering that she’s bleeding. Not knowing this part of the story, I was surprised to see the women all stripping down to their underwear, and I wondered why it was necessary. Then I noticed Carrie off to the side, directly in front of a single line of audience members at the back of the space, completely nude.

Apparently the story calls for at least a reference to nudity, with its close association of sex and sinning, but I didn’t feel it was completely necessary for the cast to strip down (they probably could have hid it or made it less obvious). Having the audience so close to the action made it that much more uncomfortable. Especially given Margaret’s warnings to Carrie not to shower at school, it’s surprising that she would.

Director Brady Schwind and producers Bruce Robert Harris and Jack W. Batman set out to create an interactive, immersive experience by transforming La Mirada Theatre into Carrie’s high school. Audience members get wristbands that separate them into freshman, sophomores, faculty members, or other school delineations, based on their seating assignments. They’re then taken into the “assembly” by class, passing by beat-up lockers and graffitied desk-chairs, and seated in bleachers built onto the stage. Despite the attempts at emersion and interaction, the staging didn’t add much. The four sections directly on the floor are pulled and moved around, which perhaps put those audience members more in the thick of it, but for those of us further back on the immovable bleachers, it wasn’t quite such an interactive experience. Well, except for the pain in our buttocks from the vastly uncomfortable seats (make sure to bring a cushion with you when you go).

As time passes, Carrie learns that she has special powers and can move objects with her mind. She has no control over these things at first, but she learns a little—though not much is said about it. There’s a short scene where she reads about telekinesis in a book, but there’s no explanation about why or how she has these powers. Schwind and crew handles the special effects well, mostly using Brian Gale’s lighting and Cricket Myers’s sounds to convey movement, as well as wires and other tricks to move objects around (a scene with a large crucifix is particularly effective). The final destruction scene is a little more difficult, partially because of the placement of the action in relation to the audience, and not knowing where to look when. In a few moments, the effects are a tad hokey, yet the scene is still powerful. Amazing how they achieve both at the same time.

More than anything, the story is very sad. Margaret is a truly horrible woman, verbally and physically abusing her daughter at every turn. Sue and her kind boyfriend Tommy try to help Carrie, but popular girl Chris Hargensen (Valerie Rose Curiel) plans to destroy her by playing the horrible bloody prank on her at the prom. As a result, Chris essentially proves to Carrie that her mother was right all along: people are cruel. A woman like Margaret White should never be proven right.

The cast all performed beautifully, with particularly strong vocal performances from Lopez, Cotton, and Parker, but there were problems with the sound, making it difficult to hear all the lyrics. It was also unclear what time period they were in; despite placing the action in 1988 (the year the musical opened on Broadway) at the start of the second act, there were occasional references to modern technology, like cellphones, Google, and Netflix, that felt tacked on. The story is dated and sexist enough that I’d have preferred they embrace its ‘80s nature, and really go whole hog (so to speak) with it: ‘80s costumes, ‘80s dance moves, ‘80s teenage archetypes and behaviors.

I’m lucky that my high school experience was unusually good, but most people know and remember the normal, everyday horrors of high school. Carrie the Musical brings them back with a vengeance. While I wonder what happened to Stephen King to make him so anti-religion (even I, as an anti-religious but agnostic person, felt it was a bit much), I appreciate the story, and the excellent work that La Mirada’s cast and crew put in. As a musical theater fan, I’m even more grateful. Any opportunity to see a rarely performed musical classic (in a sense) is a golden opportunity, and La Mirada’s production does the job beautifully. There are certainly worse ways to spend a Saturday night. Like, say, at a high school prom?