Anthony Hopkins may be the biggest name in “Kidnapping Mr Heineken,” but he doesn’t get a great deal of screen time. By focusing on the perpetrators rather than the victim, this film gives us a different perspective on the crime movie. Set in Amsterdam, it is based on the real kidnapping in 1983 of the beer empire founder, Freddy Heineken, played by Hopkins. 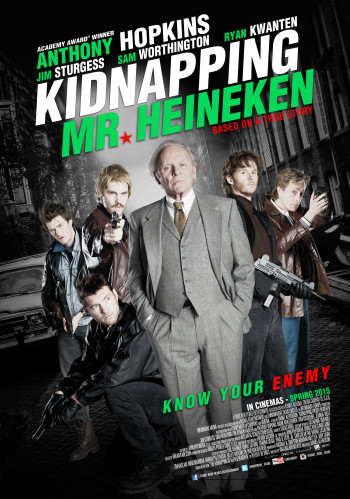 The kidnappers are supposedly down-on-their-luck small time businessmen who see no other way out than a big ransom. However, since at least two of them went on to become big wigs in organized crime, I question whether the caper was undertaken strictly out of desperation. The film does show that one of them had a personal vendetta against Heineken.

All of the actors (led by Sam Worthington as Willem Holleeder, Jim Sturgess as Cor Van Hout, and Ryan Kwanten as Jan “Cat” Boellaard) turn in excellent work – particularly the great Hopkins, of course – but the problem with this film is that the details of the story are not very suspenseful. The most thrilling part of the movie comes early when the guys rob a bank in order to fund the “equipment” needed to pull off the kidnapping.

Once they have captured him, the story slows – for the characters as well as the film’s audience. The guys figure they’ll only have to hold the man for days, but their demands are ignored, making it necessary to keep him for weeks. There is never any real threat of violence, so it becomes a waiting game.

Yes, there is tension among the kidnappers and Heineken during this time, but not enough to sustain a sufficient amount of suspense in this film helmed by Swedish director Daniel Alfredson.

If the subject matter interests you, it’s entertaining enough, especially when Hopkins is on screen. “Kidnapping Mr. Heineken” opens in theaters Fri., Mar. 6, 2015.