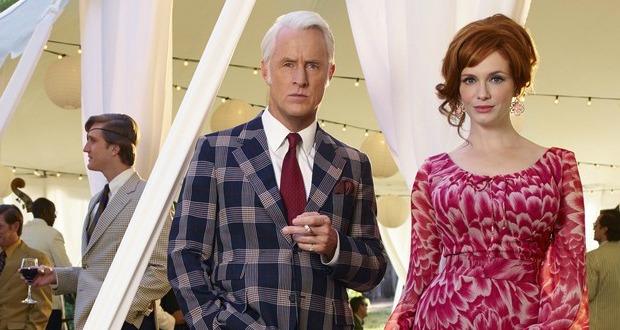 The last seven episodes of AMC’s “Mad Men” begin airing on Sunday, April 5 at 10 p.m. EST, and the campaign leading up to the final stretch of the seven-season run – aptly dubbed “The End of an Era” – is as inspired as something the creatives at Cooper Sterling/SC&P might have concocted at the height of their powers. AMC announced the start date in mid-January and, along with event organizers, began rolling out one item after another, including:

Props to the Smithsonian: Don Draper’s suit, Fedora and office bar cart are headed to the Smithsonian’s National Museum of American History in Washington, D.C., to become part of the permanent collection. So far, no word on when the “Mad Men” costume and props will go on display. The “Mad Men” props will be in good company, joining Dorothy’s ruby slippers from “The Wizard of Oz” and props from earlier hit TV shows such as “M*A*S*H” and “All in the Family.”

Exhibit and a Movie: The Museum of the Moving Image, Astoria, Queens, New York, is sponsoring a film series and an exhibit. The film series, Required Viewing: Mad Men’s Movie Influences, includes ten films that influenced Matthew Weiner’s sensibilities. He had the cast and production team watch them. The series runs through June 14, 2015.

The ten films are:

If you can’t get to Queens, many, but not all, of these are available online or on DVD.

The list got picked up by multiple outlets, including Vanity Fair.

The Museum of the Moving Image also has an exhibit, Matthew Weiner’s Mad Men, that includes the Drapers’ kitchen in Ossining and Don Draper’s office and props (Pete and Trudy’s chip and dip!) and costumes (Joan’s blood-splattered dress from Season 3’s famous lawnmower episode!). Also in the mix are mood boards for some characters for costume and look, and extracts from Matthew Weiner’s journal as the idea for the pilot and Don’s back story took hold. The exhibit runs through June 14, 2015.

Academy Award Spot & Last Round with the Cast: AMC ran a spot during the Academy Awards, a montage of moments built around Don’t pitch from the Season One finale, “The Wheel,” the Kodak slide projector Don renamed “the carousel.” In this replayed context, Don’s words tap audience attachment to the show, describing “nostalgia” as “delicate, but potent.” AMC releases a series of clips from a roundtable with cast members Jon Hamm, Elisabeth Moss, Christina Hendricks, Vincent Kartheiser and John Slattery. AMC also releases tribute videos from a wide range of fans, including would-be stars, like Sarah Silverman, and die-hard fans, like Gayle King, among others.

The Final Poster: AMC unveiled the final poster several weeks ago, a photograph of Don Draper at the wheel of a car in what looks to be Manhattan. (Though who knows, it could be Chicago.) Many assumed Don was alone, but it is always possible that there is someone sitting in the unseen passenger seat (get Jane’s take on it here).

This and That’s: The Hollywood Reporter’s article, The Uncensored, Epic, Never-Told Story Behind “Mad Men,” will probably teach even the most fastidious and thorough “Mad Men” fan something new. For instance, AMC was not into Betty as a character in the early episodes – they wanted workplace tension and drama — and Matthew Weiner’s original script for “The Wheel” had a different ending. There are two new online interviews with Matthew Weiner, one on his sister Allison Hope Weiner’s show Media Mayhem, and another, apparently taped in Berlin at Berlinale Talents 2015. I think it’s hysterical that he was forbidden to watch television when he was a teenager because his grades were so bad. Of course when his parents went out, he’d watch TV. His mother would check whether the TV was warm. So he cooled it with ice. And she noticed it was COLD. Clever boy!

Essential Reading: The Mad Men Reddit is must clicking for the “Mad Men” curious and obsessed. Posters are very much on top of the “Mad Men” news cycle, perhaps more so than the hashtag #MadMen on Twitter. Discussions are often intelligent and provocative.

Finally: I was one of the many “Mad Men” fans who one short year ago fumed that AMC should not have broken the final season into two. Forget the precedents with other beloved Golden Age 2.0 TV series (“The Sopranos,” “Breaking Bad”). I felt the split would interfere with the creative process, and suspected early on the Matthew Weiner was putting on a brave face (perhaps even a contractually compelled brave face) when he publicly claimed that he welcomed the challenge. And as a viewer, I was crushed. I was ready to experience the rest of the story, to spend a full 13 weeks riveted by the cycle of anticipation, viewing and re-viewing and then recapping each episode and, at the end of it all, undergoing whatever chasmic grief the show’s last moment would unleash.

Suffice it to say, I was wrong. The hiatus did more than renew interest in and energy around the show. It allowed AMC to give “Mad Men” a proper sendoff, and position itself in the cultural pantheon.

Next Week: A review of the “Mad Men” Exhibit at the Museum of the Moving Image and the movie “The Apartment” (1960, Billy Wilder) as introduced by Matthew Weiner.