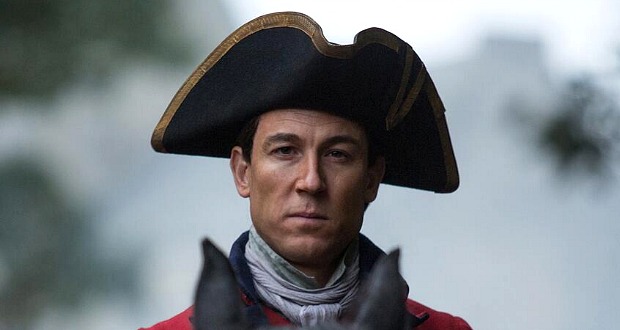 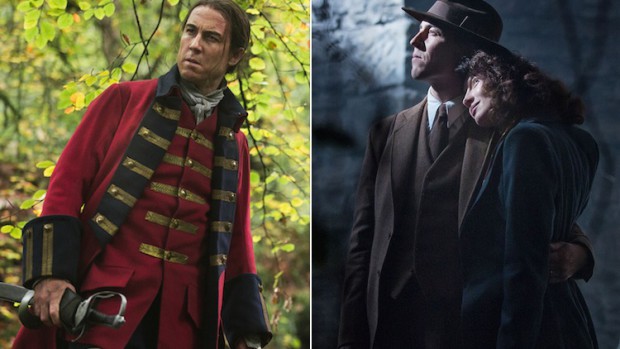 Tobias Menzies has the plum job of playing two roles on Starz’ new hit series, “Outlander,” which returns with the second half of season one on April 4, 2015.

Based on the books by Diana Gabaldon, Menzies plays Frank Randall, husband to Claire in the 1940s. He also plays the deliciously treacherous Black Jack Randall in the 18th century, ancestor of Frank and nemesis of Claire. Menzies took a few moments out of his busy schedule to chat with me.

What can we expect in this second half of the first season of “Outlander”?

We start by going directly back to the moment we departed the show. So we go back to a slightly complicated moment between Jack, Jamie and Claire.

The second half is an equally big canvas. Lots to look forward to. Really great stuff. My main involvement is Jack’s stuff with Jamie … toward the end – their main confrontation. It’s dark. It will certainly be uncomfortable viewing.

Who do you enjoy playing more: Jack or Frank? Do you find similarities between the two characters?

They say variety is the spice of life. I find that true, playing these two. One of things that we’ve gotten more and more confident with is having moments of similarity and moments of contrast and playing that line.

Do you prep differently when you’re going to play Jack vs. Frank, or does dressing the part put you in character?

Yes, I do prepare differently. I think the main difference is the way about modern man and the pre-modern man and trying to imagine myself into those different mindsets. The costuming, setting, all of that production helps place me in time.

Your character on “Game of Thrones,” Edmure Tully, was spared in the Red Wedding – will we be seeing more of you on GoT?

Not that I know of. I certainly have not shot anything more. At the moment, he’s still languishing in a prison cell somewhere.

With “Game of Thrones,” “Doctor Who,” and “Outlander,” you’ve pretty much covered the sci-fi/fantasy realm. Is there a role you’d like to portray that you haven’t yet?

Good question. I don’t think the show ever played in America, but there was a famous bandit, a highwayman in England called Dick Turpin. When I was a kid, there was a show about the adventures of this highwayman. I remember being obsessed by him. So I wouldn’t mind having a go at Dick Turpin.

Did you ever dress up as him when you were a kid?

I’m sure I did. I’m sure I held up numerous imaginary carriages and drew guns for damsels for their honor in duels.

If you weren’t playing Jack/Frank, who on “Outlander” would you want to play?

Don’t tell any of the other actors, but I’ve already got the best few characters. Keep that under your hat.

What about “Game of Thrones”?

Doesn’t everyone want to be Peter Dinklage? I think so. It’s one of those great, great characters on the page.

I was in a short play called “The Fever.” I did a show called “Catastrophe” that will be on Amazon Prime in America. I will be going back to Scotland to do a second season of “Outlander.”

I’m reading a remarkable series of books called “My Struggle” by Karl Ove Knausgaard. I’m on the third one.

It might have to be Neil Young, “Old Man.”

Tennis. Playing tennis. I spent most of my childhood on a tennis court. It was my grand passion.

If the way to the heart is through the stomach, what go-to meal would you cook for a romantic dinner?

Oooh… I think it might have to be just a very delicious, very classic Italian type of dish – a carbonara. When I was working on “Rome” in Rome, the main lesson I learned from eating out there is they have very little amounts of sauce – amazing sauce – but they use small quantities, an amazing bottle of wine, and a salad.

That, I think. I’m a bit of a rabbit. I love an amazing salad.

Probably my favorite all time is “The Wire.” It’s a great piece of storytelling in recent times. I’m watching “Wolf Hall.” I’ve heard tell and have meant to catch up on “Transparent.”

Photos of Season One, Part Two: