I spent last week (March 5-8, 2015) at the True/False Film Festival in Columbia, Missouri – a fest of documentaries that attracts a lot of big films and big directors, as well as smaller films from around the world. This week, I’ll be writing about several of the docs I saw.

One of the most anticipated at the fest was “Kurt Cobain: Montage of Heck,” a documentary by Oscar-nominated filmmaker Brett Morgen (“On the Ropes,” “Chicago 10”). Brett appeared for Q&A’s after the screenings, and below are some of the highlights. 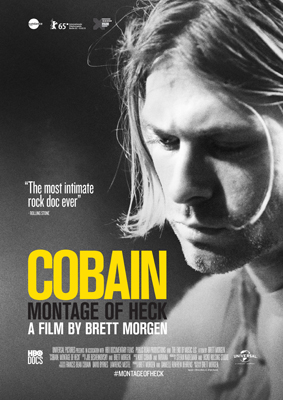 Kurt’s family gave Brett access to 18 boxes of Kurt’s materials, including never before released music, home movies, journals, and artwork. “Montage of Heck” refers to the name Kurt gave to a mix tape he made during his short life, which ended in suicide in 1994 when he was just 27.

The movie starts with footage of Kurt as a baby and includes interviews with Krist Novoselic of Nirvana, Courtney Love, Kurt’s first girlfriend, and his mother, father, and sister. His daughter, Frances Bean Cobain, is not interviewed, but she was involved with the film. As Brett said, “This was just one of those once-in-a-lifetime situations where everybody came together and gave me their materials, and we created this film.”

With the use of animation and voiceover readings of some of Kurt’s journals, the movie is very creative, making it a fascinating and fitting tribute to a man who was an artist in many different media, not just music. We also see the funny and silly side of Kurt – an aspect of his personality seldom seen by the public. This makes the film as celebratory as it is sad.

Brett on sharing the finished film with Kurt’s family:

Showing it to Kurt’s mom was really difficult because there are a lot of things in this film that no son would want their mom to see….

I think with Frances, she didn’t really know her dad, and this is the first time she experienced any of this footage and had ever seen any of this stuff or any of these letters or anything. And I think for her, it was liberating. I think that like a lot of kids whose parents take their lives, there’s a tendency to sort of blame yourself, and I think that when she saw the film, she was able to see that it wasn’t her, that the problems started much earlier in life….

On Kurt Cobain, the Myth:

One of the things that Frances said in my first meeting with her was that Kurt, for her, was sort of like this unicorn, this mythical figure. The fact is that he presented himself in such a limited way to the public during his lifetime that I think that we’ve all sort of projected a lot onto him. The goal wasn’t to tear him apart. It was to humanize him, to take it from the icon and the myth to something much closer to what he actually was as a man.

On the decision to include interviews in the film:

When I started the film, I thought it was going to be all Kurt. Then, I heard the interviews. My feeling was that of all the media that Kurt excelled in, the one area I felt I didn’t really get him was when he did interviews because he was self-conscious or defiant….

I thought, “Let him speak through his art, and then let’s bring in the people who were closest to him, who would be by his side whether he was a janitor or a rock star. And let’s hear from them and let them contextualize the film. What’s kind of amazing is that this was the first time his mother, father, and sister were ever interviewed on camera.

On why there are no interviews with Nirvana musician Dave Grohl in the film:

I didn’t feel it was necessary to have two guys talking about Kurt’s experience in Nirvana because it wasn’t that type of film. It’s a very intimate film. Krist himself grew up in Aberdeen [Washington], and he knew Kurt the whole way through. As you know, Dave came in in 1990, and by 1991, Kurt was kind of on retreat with Courtney [Love].

On the soundtrack, which includes unreleased music:

The soundtrack will be out at the end of April, which is going to have 70 minutes of unreleased material…. I’m really excited for the soundtrack because yet, it’s another side of him [Kurt] that we weren’t able to experience. If you’re a guitar player, you might have noticed the acoustic stuff, which is a different style of playing.

On what he discovered about Kurt’s childhood while making the film:

On Brett’s own personal experience of making this film:

I’ve been making films for 20 years. I’ve never been more challenged by a film, and I’ve never put more into a film than this. This was really personal…. I really like Kurt, and I didn’t know him in life. But I don’t think I’ve ever been closer to someone I’ve never known…. There were times where he was in the room for sure….