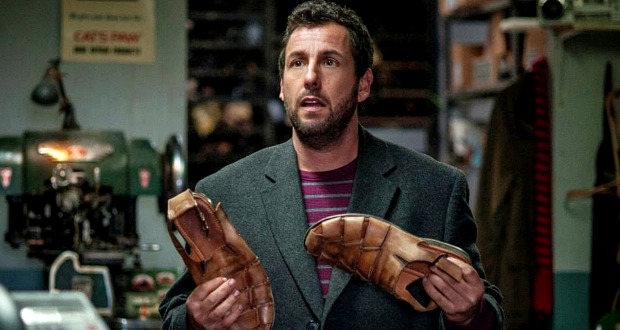 Adam Sandler cracked jokes with journalists and fellow actors at a press conference in Midtown Manhattan to promote his latest film, “The Cobbler,” directed by Tom McCarthy (“The Station Agent,” “The Visitor). Along with the director, fellow cast members Ellen Barkin, Steve Buscemi and rapper Method Man, chatted about Manhattan in all its grit and glory, the evils of gentrification, and how even they became confused about the process of playing dual characters.

“The Cobbler” is a rare opportunity to see Sandler display his dramatic chops in the way he did in Paul Thomas Anderson’s terrific 2002 film “Punch-Drunk Love.” In “The Cobbler,” Sandler plays Max, a gawky, sad sack fourth generation cobbler who spends his days in a shoe repair shop on the Lower East Side and his nights with his elderly mother in a dreary Brooklyn apartment. He’s bored and stuck in a life he feels is predestined for him. With no love life, and no friends apart from the barber (Steve Buscemi) next door, Max is in a lonely rut. In another plot line, he also misses his father (Dustin Hoffman), who mysteriously disappeared from his life.

But early in the film Max’s life turns around when he discovers a family heirloom, a stitching machine that has magical powers. On a whim he tries on the shoes he repaired on the machine. To his astonishment – the film is a magical realist fable – he discovers he becomes the person whose shoes he repaired. Yes, it gets confusing. At first Max enjoys these new disguises and the exciting encounters that transpire, but soon he finds himself in dangerous situations. Then he discovers he actually has the power to change things, for the better.

Following are highlights from the recent press conference:

Question: As actors, you are used to trying out other peoples’ lives for a living. What was it like exploring the idea of the entire look and really assuming the other person’s body?

Adam Sandler: It was very easy, because once I put on the shoes another actor came in. (laughing)

Question to Method Man: How did you approach playing your character? You go from being a thug to being Adam’s character?

Steve Buscemi: Well, one of the first things I asked Tom, I asked, “How is this going to work?” Like do I do Dustin? And he said, “No, because it’s your voice, and the person who steps into those shoes sort of inhabits that person.”… I was very nervous thinking about it, so I just had to stop thinking about it… It was pretty fun watching these guys play around with that, though, in their own different ways… I think there was one moment, where we all got confused a bit, especially Dustin. I remember at one moment he said, “Am I me or am I Adam? I don’t know!”

Question: Adam, in this movie, you get to become a lot of different people. In real life, if you could spend the day in someone else’s shoes, look like them, get away with whatever, who would it be and why?

AS: It would be grandma. Just the pleasure she has of making me soup. Just to see it from that side, turning on the vaporizer when I’m sick. See what that must be like for her.

Question: One of the great things about the film is that it’s a loving look at New York. Were there any places you wanted to visit, or places you recognized?

AS: The Lower East Side was great to be shooting in. A lot of my family is from the Lower East Side. Good food, nice people, just brought back all the memories for me, just driving around New York and hanging out with my parents and always talking about “Grandma lived there,” and that kind of thing.

Question: Tom, you wrote the screenplay for “Up,” which is about a helpless person whose house was taken over by big corporations. “The Cobbler” also has a strong anti-gentrification message, so is this something you are personally concerned with?

TM: I guess so, yeah, I haven’t’ thought about it too much and that connection. But I do appreciate character. I live in Tribeca right now, and they’re ripping down these little buildings and building glass towers now, but Ellen’s right: if you walk around the pockets in the Lower East Side where we shot, there are still vestiges of it, and it’s sad to see the city lose all that.

I understand development is inevitable, but it is sad when you think that we are losing all of this charm and texture that is the very reason we chose to live here in the first place. It was fun working it into the story, have a context for it, so we could be lighthearted with it. Like all these shopkeepers and stuff, the geek side of me really appreciates it and exploring that with these wonderful actors.

Question: How have your views on filmmaking changed since people will now be seeing things on a smaller screen?

AS: I’m just excited for people to see this movie. I did see this movie in Toronto at a film festival on the big screen. There were a lot of people in the room, and it was neat because it played like a comedy. There were a lot of laughs, and it’s always fun in the theater, hearing group laughs, being on the same wave length and having a great time. And this movie is coming out in some theaters, right? Which will be cool to see. But the fact that you can see it at home, it’s great. You work hard, you make the best movie you can, and you just want as many people to watch it as possible.

Question: Do any of you have bad landlord stories?

SB: I actually once talked my landlord down from rent. I knew that he was overcharging me because I got the previous tenant’s rent in the mail, and it was a hundred bucks less than what I was paying. I made a deal with him because I had two roommates, and he said I wasn’t supposed to have two roommates, so he let me have the two roommates and I also got the markdown, the hundred bucks.

EB: You know, I live on 12th street, right across from where the old St. Vincent’s was, so when I read the script, I had a very personal connection. Where I live, I am watching the entire nature of my neighborhood change with the taking down of one building. I mean it’s a big f…ing building and it will change the entire neighborhood. Is it going to happen? Yeah. Can you stop it? I don’t know. But does it feel terrible? Yeah, it does.

Question: Adam, if your character were to ask you for advice on how to be happier with his life, what advice would you give him?

AS: How would I try, as Adam, to cheer up my character? I don’t know. I like that he is good at what he does — I can’t cobble as well as that guy. You know, he’s got a loving mom. He’s got the house, the bills that mom didn’t pay. I think the best thing he’s got going for him is the plastic on the couch. He doesn’t have to clean up if he spills. I’d just tell him “Everything is going to be alright, Max. Believe me. You’re a handsome man in a beard. Enjoy it.”