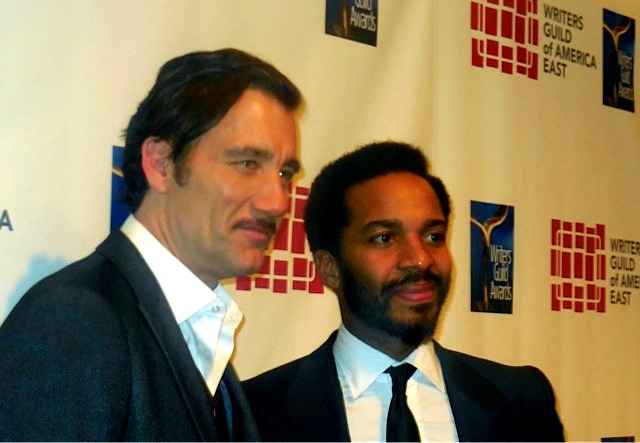 The writers group honored as best documentary “The Internet’s Own Boy: The Story of Aaron Swartz,” written by Brian Knappenberger.” (The film is not even nominated for best Oscar documentary.)

The writers group made their selections for outstanding achievement in writing for film, television, new media, videogames, news, radio, promotional, and graphic animation categories. They hold simultaneous ceremonies at the Hyatt Regency Century Plaza in Los Angeles and the Edison Ballroom in New York City.

The Writers Guild of America, West, also gave the Paddy Chayefsky Laurel Award for Television Writing Achievement to “Scandal”/”Grey’s Anatomy” Creator and “How to Get Away with Murder” Executive Producer Shonda Rhimes.

In L.A., Ben Affleck received the Guild’s Valentine Davies Award for his humanitarian efforts, and in an emotional highpoint, “Rescue Me” co-creator Peter Tolan presented the Screen Laurel Award for Screenwriting Achievement to late screenwriter-director Harold Ramis (“Groundhog Day”), which was accepted by the Ramis family.

Special honors were given to “Crash” screenwriter Paul Haggis, who received the Ian McLellan Hunter Award for Career Achievement in Writing.

Bill Moyers presented legendary television writer/producer Norman Lear (“All In The Family,” “The Jeffersons”) with the Evelyn F. Burkey Award for Bringing Honor and Dignity to Writers.

On the red carpet, the 92-year-old Mr. Lear told me, “It was a joy waking up this morning. It’s a joy being here. That I’m being honored makes it something a little more special.” Later on when he accepted the prize, after a long list of the groundbreaking programs he contributed, Lear accepted his prize by enthusing, “I’m so touched. I’m really a hell of a guy!”

On the red carpet, I spoke to Gillian Flynn, who wrote and adapted “Gone Girl,” up for best adapted screenplay, which has gone on to be a box office success. She told me what she was proudest of is that “the film shows the studios that men and women will go see a film written by a woman and starring a woman and not consider it a woman’s picture.”

I asked Larry Wilmore how he prepared for that night’s gig as host. “I don’t know if you really can, to be honest with you. You put some stuff together. Hope people enjoy it,” he said. “But it’s kind of an intimate affair, too. It’s not televised. It’s kind of low-key. You just try to have fun, I think. At least that’s my battle plan.” I added that because the audience were primarily writers, they would probably be doing serious drinking. “Exactly, including the host,” he told me.

Later he would begin his monologue by cracking, “What are the odds a bunch of writers would be available Valentine’s Day?”

Below the photos is a complete list of winners.

Photos taken by Paula Schwartz for Reel Life With Jane

The Imitation Game, Written by Graham Moore; Based on the book Alan Turing: The Enigma by Andrew Hodges; The Weinstein Company

The Internet’s Own Boy: The Story of Aaron Swartz, Written by Brian Knappenberger; FilmBuff

Olive Kitteridge, Teleplay by Jane Anderson, Based on the novel by Elizabeth Strout; HBO

“Brick Like Me” (The Simpsons), Written by Brian Kelley; Fox

DOCUMENTARY SCRIPT – OTHER THAN CURRENT EVENTS

“How I Met Your Mother,” Written by Dan Greenberger; CBS

The Last of Us: Left Behind, Written by Neil Druckmann; Sony Computer Entertainment