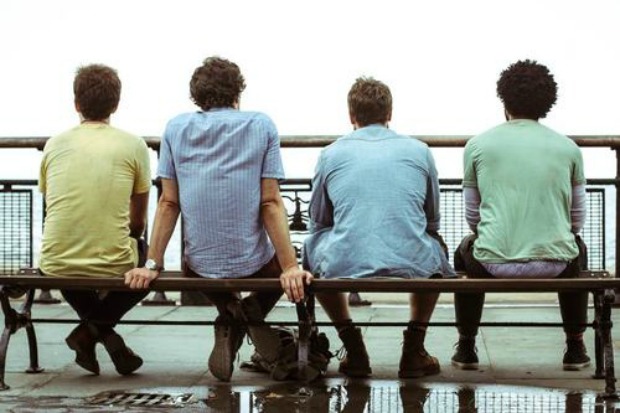 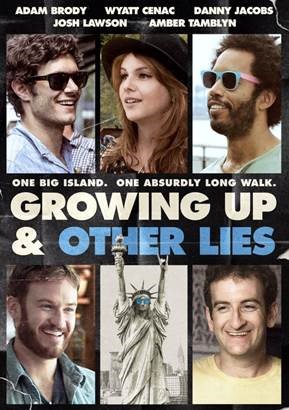 “Growing Up and Other Lies” is a story about Jake (Josh Lawson), a struggling artist in Manhattan, who decides to call it quits and move back to his home state of Ohio to help with his ailing father. But before he goes, he recruits his three besties to walk the island of Manhattan (13.4 miles), 260 blocks for a nostalgic tour of their younger days.

Josh Lawson does a great job playing the lead in this nice indie film. He takes command from the first scene where the guys are impressed with his “on command” vomiting. Gross, but a typical guy thing.

During their day long walk (I get tired just thinking about it – but it does sound intriguing), each character delves into their own issues of life. Gunderson (Wyatt Cenac), the intellectual, can’t seem to find his place in life yet. Billy (Danny Jacobs) wants to climb the corporate ladder, but isn’t climbing it fast enough. Rocks (Adam Brody), a soon-to-be father with girlfriend Emma (Lauren Miller), hasn’t quite accepted the responsibility of parenthood or having a partner.

And last, but certainly not least, Tabatha (Amber Tamblyn), Jake’s ex-girlfriend, still holds the key to his heart. These characters have great chemistry with a lot of diversity and personality – the ingredient of a solid movie.

After slugging down the island, the four make a stop at their old apartment, where it’s revealed that Tabatha is single again. Jake, who is still in love with her, takes the boys on a detour to Central Park, where she is participating in a kids’ birthday party.

Jake tells her that he’s still in love with her. Awww… a girl’s gotta like that. Tabatha then invites him to dinner at her parents’ house, which of course, alters the “guy trek.” How do you think his buddies feel about that? They need to make it to Battery Park before dusk, but there are lots of obstacles to be hurdled.

One comical scene that is straight out of real life is when the boys are in a liquor store and Billy’s boss, Mr. Kim, sees him. He asks Billy how he’s feeling (Billy called in sick) and Billy makes up several crazy fibs. I loved it when Mr. Kim tells Billy that if he wants to take a day off to horse around with his friends, “next time tell me the truth.” Seems so simple, doesn’t it? I’m not sure that would work in real life, but it’s nice to think it might.

Another thing I like about this film is how the very different characters blend together to create interesting conversation and plenty of banter. The characters also deal with realistic problems and questions that people deal with everyday. Several times, Jake questions if he should leave NYC or not – why he should go or why he should stay. Real. My sister had to make a decision like Jake’s several years ago – she left L.A. to come back to Seattle.

Written and directed by Darren Grodsky and Danny Jacobs, “Growing Up and Other Lies” is a refreshing film with creative writing, interesting characters and a great concept. The story takes both the viewers and characters in different directions at each stop throughout their walk down Manhattan Island.

Be sure to check out “Growing Up and Other Lies” when it hits theaters and On Demand March 20, 2015.