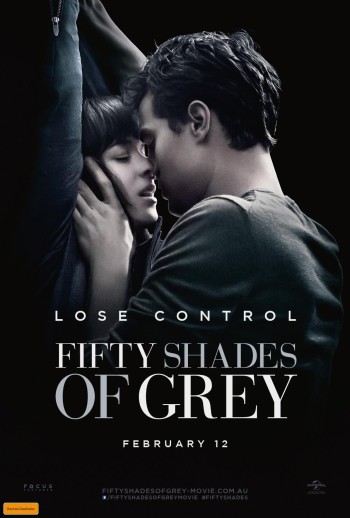 The mysterious and handsome man is immediately smitten with the soft-spoken brunette (seriously, she sounds just like her real-life mom in “Working Girl”). So much so that he shows up (somewhat creepily) at the hardware store where she works, which is super convenient because he needs to pick up a few things: rope, cable ties, duct tape…

Knowing her love for classic books, he messengers over some cool first editions like Thomas Hardy’s “Tess of the d’Urbervilles” and then later shows up at a club to hold her hair back while she pukes in a drunken stupor.

But that’s just foreplay. Christian then presents “Ana” with a contract mapping out the conditions of a dominant-submissive sexual relationship with him. That’s when he learns she’s actually a virgin and thus, not well-versed in, well, anything having to do with sex, much less the whips and handcuffs in his red-walled “playroom.”

While she reviews the contract, they start an intense affair that makes them both question everything they thought they knew about relationships.

I haven’t read E.L. James’ book on which this movie is based, but from what I’ve heard, the movie is actually better than the book, which began as a piece of “Twilight” fan-fiction titled “Master of the Universe.”

Yes, Christian stalks her at first and says he’s obsessed with her. On the other hand, Ana doesn’t sign the contract right away (and good for her, since the wording is extremely controlling, right down to what she can and can’t eat). She retains some control over things, and — at least in the movie — he makes sure she understands the concept of “safe words,” if anything gets too intense. And everything appears to be consensual — at least in the movie.

As Christian, Dornan is brooding and tortured, having had “a rough start in life,” and Johnson is both vulnerable and curious as Anastasia. They’re both extremely good looking, and despite stories in the press to the contrary, they generate a good amount of heat and even some comic moments.

Rounding out the cast is Jennifer Ehle as Ana’s mom, Luke Grimes and Marcia Gay Harden as Christian’s parents, and Rita Ora as his sister, Mia.

For me, the movie isn’t so much about the kinky sex as it is about the relationship of this damaged soul and the young girl he invites lures into his world. At first, she doesn’t really know what she’s getting into, and between his lavish apartment and private helicopter, it’s no wonder she’s intrigued.

Sure, there are some cringe-worthy moments, like when Christian broodingly plays the piano (Edward Cullen, anyone?), when Ana bites her lip and it drives him crazy (I’m pretty sure Bella bit her lip quite often), and when Christian starts kissing Ana wildly in an elevator. There are romantic glider rides, smoldering glances, and yes, the occasional detour into S&M.

But the best parts of the movie aren’t about the sex, but rather the scenes where Christian and Ana are getting to know each other — the “business meeting” she calls to discuss the contract, the scene where he shows up at the hardware store, the drunken phone call she places to him from the nightclub. I also love the sultry soundtrack, which includes Beyonce’s “Crazy in Love” and Ellie Goulding’s “Love Me Like You Do.”

Devoted fans of the book trilogy will be delighted to know that the studio has already committed to making the second and third books, “Fifty Shades Darker” and “Fifty Shades Freed,” into movies, as well. Which is great, because I really want to see what happens next.

Sex/Nudity: Like the book, the movie includes several explicit sex scenes with nearly full-frontal nudity (breasts, backsides, occasionally pubic hair). Most of the sex scenes involve the use of Christian’s ties, eye masks, and other sex toys and bondage aides like chains, whips, ropes, handcuffs, and feathers. Christian and Anastasia walk in on her roommate having sex on a couch; she’s wearing a negligee, and her partner’s jeans are pushed down under his butt.

Violence/Gore: Their sexual activities appear to be consensual, and include Christian spanking and hitting Ana, lightly at first, but later there’s a scene where he hits her (with her consent) six times so hard that she cries and leaves.

Drugs/Alcohol: Adults drink wine. Ana gets drunk at a club and drunk-dials Christian. Alcohol is poured on a body during a sex scene.

Which Kids Will Like It? This one is NOT for kids.

Will Grownups Like It? “Fifty Shades of Grey” is worth a look if you’re not bothered by kinky sex. For me, it’s more about the relationship between Christian and Ana.

Images in this review used courtesy of Focus Features.