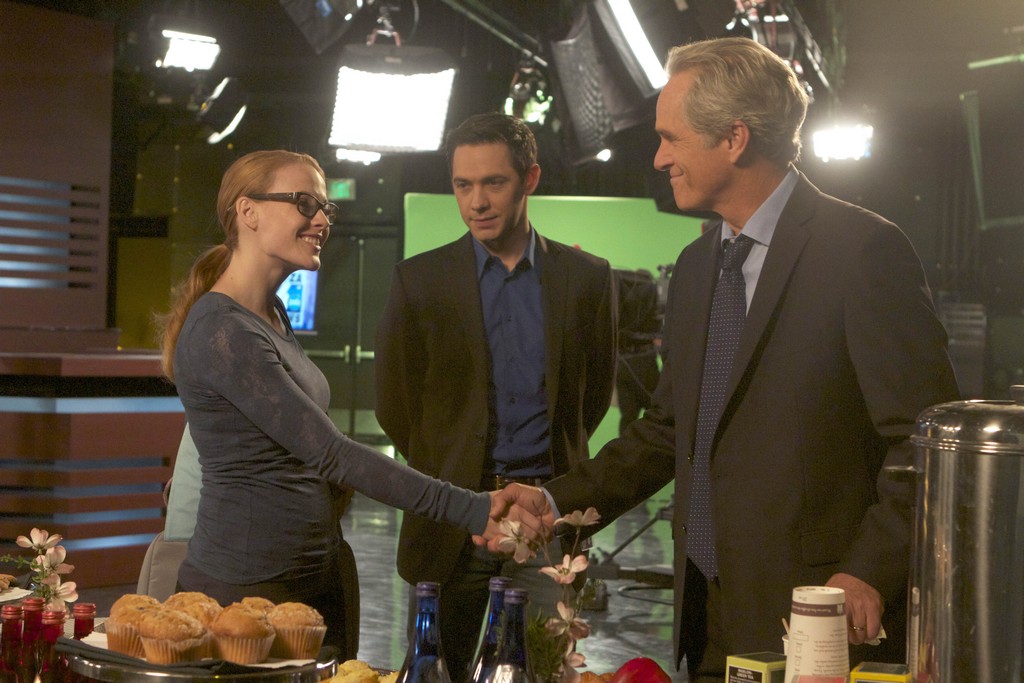 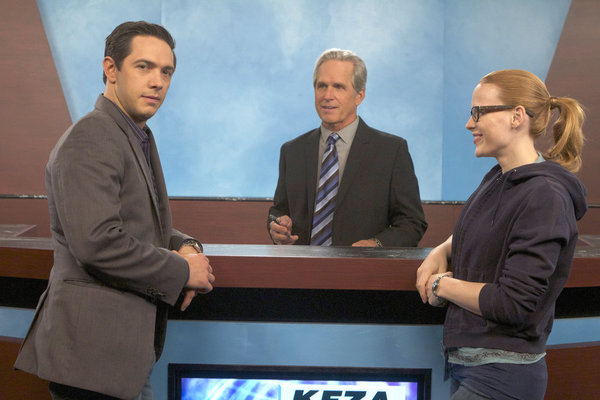 Gregory Harrison has been acting for some 40-odd years. Fans may remember him from the sci-fi cult classic “Logan’s Run,” but most will recognize him from his days on “Trapper John, M.D.” I recently chatted with Harrison, who is starring in the upcoming Hallmark Channel movie, “Cloudy With a Chance of Love,” premiering Sunday, Feb. 8, 8/7C.

Tell me about your role in “Cloudy With a Chance of Love.”

It’s interesting. I’m a supporting character now. I’ve gone from … It seems like two years ago I was always the youngest guy in the cast, and now I’m the oldest guy in almost every cast. This one, I am the voice of wisdom … Kind of the unexpected voice of wisdom, because I play a newscaster/anchorman who is very full of himself. He seems so self-involved, and it comes as sort of a surprise that he’s actually pretty astute toward the end of the movie, but that was fun to play. I could play all of the funny Ted Knight kind of full-of-himself anchorman stuff and turn around and not be quite such a buffoon at the end of the film.

In “Nine Lives of Christmas,” you were so enamored with the cat who played Ambrose you went out and adopted one. Did you adopt a meteorologist with “Cloudy”?

(Laughs.) No, but I fancy myself as a bit of a meteorologist because I’m a surfer. I’ve been for 45 to 50 years almost, I’ve been looking at weather charts, NOAA charts, tide schedules, wind direction … I’ve been dealing with, trying to anticipate, what the surf will be like based on the weather for most of my life. I’ve actually gotten pretty good at it. I tend to be right more than I’m wrong, which is more than I can say for a lot of weathermen on the news! No, I haven’t adopted any meteorologists, to answer your question. 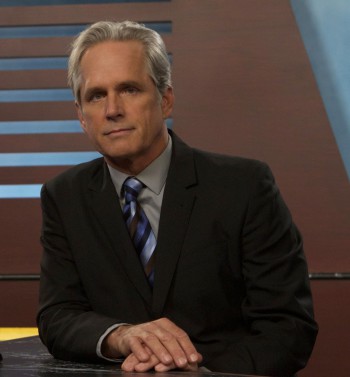 Oh! Doobie is excellent! I hang him around my neck still, like I used to when I first got him, but my neck gets tired because he’s so heavy! He’s still very chill, very relaxed. I can flip him upside down and spin him on a hardwood floor and spin him in circles.

Do you have any more Hallmark projects lined up? And why aren’t you the romantic lead in one of these movies?

Not at the moment, although I am in talks for a couple of things I’m looking to do. Hallmark and I get along very well. They like me and I like doing movies for them, so we’re looking at other possibilities, but there’s nothing specific right now to really talk about.

You’ve been married to Randi Oakes (formerly of “CHiPs” fame) for close to 35 years, what’s your secret to a successful relationship?

Well, the joke secret that I always say is that of those 34 years we’ve been married, we’ve actually been together side by side for about 15 of them. Because I’m always off on location, and absence makes the heart grow fonder. I think there is something to that. It’s not entirely a joke. The real bottom line to it is we have maintained a level of respect even when we don’t necessarily feel all the other things you’re hoping for in a marriage. So we’ve never said anything that couldn’t be taken back or done anything that couldn’t be forgiven. I think that’s why it’s lasted for 34 years. Looks like it will for a lot longer.

You made the conscious decision to move away from Los Angeles to raise your kids. Can you tell me more about that and what you think of those raised in the limelight – the Lindsay Lohans and the Kardashians, for example. Being raised in Hollywood seems to have a negative effect. Do you think it can ever have a positive effect?

It’s kind of an interesting question, a broad question. I think there are pros and cons to being raised in the city. In Hollywood, in particular, there are a lot of cons, a few pros. I think that giving a wide spectrum of experiences to your children is a really good thing. I always loved that what I created for my family was a place to return to that was sane and where the values were fairly simple and one that I, certainly, and my wife approved of. So even if we want to go to New York for a year – when I’d be doing a play or a series or whatever – we’d come back to a little town on the coast of Oregon with the same old friends who didn’t deal with your celebrity, they dealt with who you were. My children were judged for their real character and not who their parents were.

If there’s anything really bad about being raised in Hollywood it’s that. It’s not a realistic example of the world for people in the business and their families. I think the value system that I prefer in my life … You know, I like being an actor, I love being an actor. I don’t particularly love the business. I don’t particularly love the milieu, but I love the craft and so I wanted out. Between jobs, I wanted to be able to totally step away, and I wanted my family to not be influenced by it, as well. I have no regrets. Even though I failed with one of my kids — she’s become an actress! Lily, she just turned 26. She’s in Hollywood with the Groundlings. She and I did a movie together this last year (“Fair Haven”). She’s a wonderful girl. She didn’t start until she was 18. She grew up in a little town with the same values that I wanted her to have. She’ll survive Hollywood. I think her character will survive Hollywood. I can’t say that about a lot of them.

What do your other kids do?

I have a daughter, Kate, who is a very successful model, internationally. My wife was a very successful international model for many years before she became an actress. Kate followed in her footsteps, Lily followed mine. I have a daughter, Emma, who is my oldest child. She’s a designer/artist living up in the Northwest. I have a son, Quinn, he’s living in Nashville. He doesn’t really know what he wants to do yet, but he’s exploring the world.

One of your first big roles was the lead in the cult classic “Logan’s Run.” Have you ever been to ComicCon or similar conventions, and what has your experience been like?

(He laughs.) I’ve been to a couple. Mostly, I went back when we were doing the series, and shortly thereafter, I was invited to a couple. It was really interesting. I love how devoted the fans were, but I have to say some of them were the strangest people I have ever met. Other than I was a science fiction actor and they were science fiction fans, I didn’t have a single thing in common with them. It was full costume most of the time. Real science fiction nerds. I’m very different than that. I wish I were more of a nerd. I’m very outdoorsy and physical. Anything out in the sunlight and isn’t at a desk. Most of the science fiction fanatics of that era were the opposite. Now, I think a lot of them are gamers … who also sit in dark rooms for long periods of time.

I have to admit, I have never been a gamer. Other than maybe buying one for my son ten years ago and playing with him for 20 minutes before I had to walk away, I don’t think I’ve ever played a game. Any video game of any sort.

Not even on your phone?

Not even on my phone! I don’t spend much time in front of a screen. As little as I possibly can. I do write. In spurts. I need to get up and move around.

Would you ever do a “Trapper John, M.D.” reboot, if there was one?

You know, I’ve been thinking about that for years. Unfortunately, Pernell (Roberts) died a couple years ago. If there’s still an audience who remembers it – they’re all getting pretty old now — wouldn’t it be fun if Gonzo, if I came back, and I was sort of the Pernell character – I was the old doctor in the hospital to some new young bucks? That would be fun, but I think that ship has sailed.

I watched it when I was a kid and wondered, why did Gonzo live in an RV in the hospital parking lot?

Um, I know. I think it was because it enabled him to be more of a player. It enabled him to get more chicks. I don’t know why anyone would … I would get fan mail with people saying, “Please come and operate on me. Or on my mother…” I was like, “Wait a minute. You have this guy who hardly ever shaves, he hardly ever wears his shirt. He’s always drinking wine in a motor home and then he stumbles into the operating room and performs surgery. Why would you want him as your doctor?!” But for seven or eight years, we were in the Top Five.

The “Au Pair” movies were such a big hit with the fans. Why do you think that franchise was such a success compared to other TV rom-com movies?

Do you prefer stage to film? Singing or acting?

I wish I could nail down which one I like better. I think I like them in relation to each other. I think it’s the mix that I love. Without stage to intermittently throw into the mix, I would be miserable, and without film or television to run to from stage, I would be miserable. They require different acting muscles, so to speak.

Favorite meal after a day of surfing?

“1493.” It’s a book about what happens to the entire planet because of Columbus so-called discovering the new world.

Wow. You have to give me a style of music.

They’re all so different…

“Cloudy With a Chance of Love” premieres on the Hallmark Channel on Sunday, Feb. 8, 8/7c.