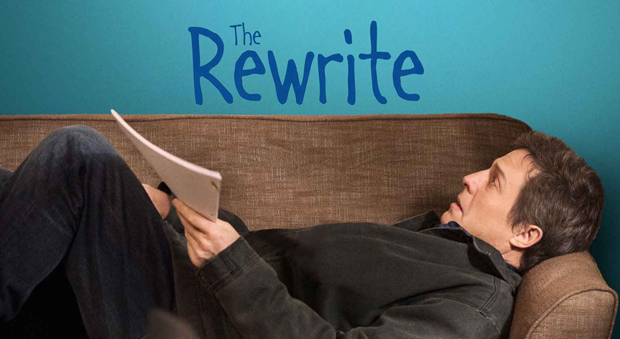 Hugh Grant and writer/director Marc Lawrence – who previously worked together on “Two Weeks Notice,” “Music and Lyrics,” and “Did You Hear About the Morgans?” – have teamed up again for the new comedy, “The Rewrite.” Hugh stars as a screenwriter with one masterpiece under his belt and no new prospects. So, as a last resort, he takes a job teaching screenwriting at an upstate New York university and makes some important discoveries about himself in the process.

The comedy costars Marisa Tomei, Allison Janney, J.K. Simmons, Bella Heathcote, and Chris Elliott. Earlier this week in New York, Hugh, Chris, and Marc appeared at a press conference. Below are some of the funniest bits, as you can’t expect much seriousness from any of those guys:

A conversation about serious undertones in comedy:

Chris: With me, I honestly feel like I’ve spent the last ten years of my career trying to get smaller and smaller with what I do comedically. I think that’s been noticed a little bit, and so, I’ve been able to move from doing the goofy, crazy stuff that I was known for doing in the 80’s and early 90’s into maybe doing something where I’m a little bit more believable.

I never thought I was a believable actor. I always thought I was this goofy guy. There are actors – comedians – that I believe on camera. I did believe Robin Williams, I believe Steve Martin and Bill Murray. I never believed myself when I was actually trying to act. So, it’s taken me a while to find that balance. I think I did in this movie, and it’s because of working with Hugh and with Marc, who keep the reins pulled in pretty tight.

Marc: I don’t know. I believed you in “Groundhog Day” very much.

Chris: You know, I was so stoned. [Laughter] But that’s sweet to say.

Hugh: I can only really vaguely perform in a sort of light comedy tone. I’ve tried other tones, and it’s a disaster. So, I’m sort of more or less stuck there. Having said that, I did attempt to render some emotions in this film. At least I tried.

Marc: We cut all of that. [Laughter]

Hugh on whether he has ever attended or taught a master class:

I did get persuaded by a pretty girl to give a master class at some college in acting. Who’d have thought? And I thoroughly enjoyed it. I liked the power trip, and I liked exploiting the students. [Laughter]

A conversation about the “texting generation”:

Hugh: I sometimes wonder if one could anymore make a romantic comedy because I don’t think people under 25 or under 30 maybe talk much. I mean, how would you do it?

Marc: You mean, as opposed to text?

Hugh: Yes, every shot would be a close-up of their phone….

Marc: They do still talk, actually. They just talk while they’re doing that….

Hugh on whether he relates to the theme of meaningful art versus money-making art:

I’ve never had any standards in particular. I’ve just thought, “Does this thing make me laugh? Did I get bored reading this script?” And if I didn’t get bored, and if I did laugh, and I thought it came into that narrow, little area where I might be able to perform it, I’ve always just said yes. I tell you what I am quite proud of, actually. Since “Four Weddings and a Funeral,” I’ve never done a job just for the money. I’ve always thought I liked it. Whereas before “Four Weddings and a Funeral,” I only did jobs for the money.

Hugh on the theme in “The Rewrite” of not confusing celebrity with self-worth:

I like the way that my character learns that there are other metrics by which to judge yourself than money and how much you’re wanted in one particular trade. Suddenly, he realizes he’s wanted by his students. He’s valued by them and by the university. I think that’s rather touching. It’s been a huge surprise to me that my children – they value me despite the fact that I don’t make many films anymore and waste my time doing politics.

Hugh on working with Marisa Tomei:

I was frightened of her. I’m still frightened of her because she’s so good and so much the opposite of me in terms of how she comes at a role. She’s a proper New York method actress, so she knew exactly why she said every line she said. I didn’t have the faintest idea why I said anything except that they sounded right and might get a laugh.

I’m probably not quite that bad, but I mean, she’s really, really into all that stuff. And one does sometimes roll one’s eyes when it’s four in the morning and you’re very cold, and she’s saying, “Why do I say this line?” And you want to say, “Because then, we can all go home.” But it does pay off for her. She is brilliant.

A conversation about any crazy jobs they have ever had:

Chris: Unlike Hugh, I still do work for the money. I actually have been so lucky to go from one thing to another. My first job was working for Dave Letterman, and I worked there for eight years before I had my own TV show and a movie. I seem to have always been able to have something during the year to make my nut. I have done some horrible movies for a quick buck, but my crazy jobs weren’t even that crazy. I was a tour guide at Rockefeller Center and then a PA and a runner on a couple of TV shows. I didn’t really have to stretch that.

Right now, like everybody, the times in this business have changed, and the numbers have gone down, especially for people like me in the business. I still try to be certainly choosy, and the idea of working with these two guys was too much to turn down. So, I really did it for below what I usually get paid.

Hugh: Well, I’ve cleaned a lot of lavatories. [Laughter] Yes, I have! And I was rather good at it. But I did hate it. I remember I was cleaning lavatories at IBM in London, and I was on my way to work one day. I thought, “I really can’t stand it another day. I wish the place would burn down.” And as I turned the corner, it was burning down. I didn’t know I had that power. I’ve tried not to use it too much since.

I delivered new cars. In those days, it was very important that you had to run them in slowly. So, we were told to drive them at 20 miles per hour, and we drove them at 120 miles an hour. I crashed one and was fired from that job.

I was a very good waiter at a gay restaurant at King’s Road. A lot of tips because I was very flirty…. It happened to have a large gay clientele, and I wiggled my bottom.

Marc on working with some of the same actors more than once:

I don’t like meeting new people. I almost never leave the apartment. I live a kind of hermit-like existence. I actually do get very comfortable around certain people, like Chris and I had done something a while back and always wanted to work together again. I’m a creature of habit in every aspect of my life. It just so happens in this situation that the people you’re doing stuff with are the absolute best at what they do, so it all works out.

Hugh: Marc has had the same lunch every day for, what is it, 30 years.

Marc: Sandy [Bullock] always used to say, “Everything you eat is white.” But I do like working with the same people again. Also, for the kind of stuff I write, which is way too many words, there’s not many people who really do it all that well.