“Ana Maria in Novela Land” is a comedy about a young woman (Ana Maria) who is a big fan of a particular Telenovela soap opera. When she wishes she could live in the fabulous world she sees on screen, she gets her wish and switches with the character she most admires (Ariana). While the premise is utterly silly and we’ve seen body switch movies before, this film is a hoot.

What makes it work most is the decision to keep the Telenovela characters as real people rather than actors. They’re living their hyper-dramatic (and sleazy) lives without the knowledge that they’re being watched on television screens. So, when the Telenovela temptress takes a walk in East L.A., she’s devastated (in true Telenovela fashion) to find posters and billboards of herself all over the place advertising the secrets of her “life.” (Most of the film is in English with portions in Spanish with English subtitles.)

Edy Ganem, who plays Valentina on “Devious Maids,” plays both Ana Maria and Ariana. Michael Steger also plays dual roles as Ana Maria’s friend and the hot young guy on the soap. The great Luis Guzman plays the Telenovela nemesis, and Elizabeth Pena is Ana Maria’s rather clueless mother. It would end up being Pena’s last film. She passed away in Oct. 2014 at age 55.

I spoke with Edy and Georgina Garcia Riedel, the director and screenwriter (with Jose Nestor Marquez), on the phone about “Ana Maria in Novela Land.” Below are some of the highlights of our conversation.

I’m assuming it wasn’t so easy to find an actress who could play both the girl next door and the femme fatale?

Georgina: When we were coming up with lists at first, it seemed like, “Oh my God, we’re never going to find this girl.” Not only does she have to be the femme fatale and the quirky girl next door, but she needs to be bilingual, and she needs to be Latina, and she needs XYZ. There’s just a lot of boxes that needed to be checked off.

Actually, my mom and best friend are huge “Devious Maids” fans, so when I told them about this project and difficulty finding the lead, they were like, “You need to look at Valentina.” So, I watched some episodes with my friend, and I was like, “Ooooh! She’s good, but does she speak Spanish?” I Googled it, and lo and behold, there was a YouTube video of her being interviewed in Spanish. Honestly, just based on those two things I saw, I felt like she could pull it off.

It’s pretty irresistible to be able to play two different roles in the same film, I would imagine:

Edy: Yeah, I read that and was like, “Hey, dream come true!”

In the shooting of it, did you have to switch back and forth a lot?

Edy: Well, it was definitely a big process to do that switch. It took a lot of time, so for scheduling, they made sure for most of the time that it would be either a day of all Ana Maria or a day of all Ariana. But I did have a couple of days where we had to do the switching, and that switching, let me tell you, it’s really interesting. It definitely took a while to become Ariana.

Ariana wears way more makeup. Her skin is more tan, just more luscious, her hair. So, definitely, it was a transformation. There’s a really funny picture where I have five people working on me…. It was a big team effort. 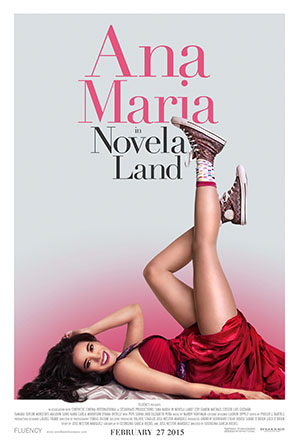 I would imagine, though, that all of that physical transformation helped you to make that switch internally:

Edy: I wore a bra with padding, and I stood more straight, like proud of who I was. That was one of the physicalities that was definitely a difference between the two characters. I tried to make sure that I had a lot of differences between the two of them so that they could be two totally different people.

You could easily forget that it was the same actress playing both characters:

Edy: Well, that was my goal, and I’m really flattered that you say that. I was worried.

Are either or both of you fans of Telenovela?

Georgina: My dad is white, and my mother is Mexican. I loved the body switch movies growing up, and also would watch Telenovelas with my nana and my mother and my sister. So, I grew up watching them. I was a big fan as a kid…. So, for me, this was like my love letter to that experience of growing up and watching them as a kid.

Edy: My whole family’s Mexican, so it’s like being Mexican and not eating tortillas. So, I definitely grew up watching these novelas. And I really remember being into a bunch of them as I was growing up.

Talk about working with Elizabeth Pena.

Georgina: I have worked with her twice. I worked with her on my first film, “How the Garcia Girls Spent Their Summer.” It was my first feature, and she basically took a chance on me. This well-established actress who is an icon in my community. Everything came together quickly, but the shooting of it and getting into Sundance was always a process. It was like two years later, “OK, we’re done, and we’re going to be at Sundance.” She said, “OK, I’ll be there.” I was like, “We have no money.” She was like, “I’m still coming.” She flew herself out and put herself up in a hotel. She was that committed.

Then, it was another two years to get someone to recognize the film’s potential and get it into theaters. She was like, “I’m there.” That’s her personality. She worked her ass off for press on that movie. There was no interview that was too small to do. She was just out there…. She was loyal. Since that movie, I’ve wanted to make another movie with her. When this opportunity came about, she was the first person that I reached out to, and she was the first person who said yes….

We joked on set. “OK, in ten years when I make my next film, you’re gonna be in it.” We both laughed because I was being self-deprecating, but I knew that in ten years, if I called and there was a role, she was going to say yes. That really sums up the type of person Elizabeth Pena was.

Edy: I got to meet her on this set, and the fact that she played my mother gave us a lot of time together. It was just such an inspiration to work with her because as a human being, as a woman, you could see that she loved what she did. This was who she was. She was an actress. She was always smiling, always laughing, always joking with us, taking part in whatever was happening. For me, I can’t really say anything else besides the fact that I have this wonderful memory of a woman who was just so joyful.

Literally, in the middle of a conversation I was having with her about boyfriends, husbands, having children, not having children, she told me, “I lived my life. I lived. I’ve lived.” She seemed happy with what she’s done, and I think that’s amazing because she achieved so much. The fact that we were able to have her in our film, it was an honor. For me, it was a great learning experience as well to see her work, and when the film was done, to watch her.

Is there anything, Edy, that you can tell me about the next season of “Devious Maids”?

Edy: I can tell you a little bit. I recently read the scripts – the first two. I think Valentina’s going to start pursuing her dream. She’ll finally get a start on her fashion designing, which is wonderful. I think you’ll get to see Valentina make some interesting decisions regarding her life and her love life, but it will be also that you finally get to see more of an actual relationship working out with her and Remi. If you’re a fan of Valentina, you might miss her a little bit. [Laughter] So, we’ll see! I’m excited.

Ah! And they don’t have a premiere date yet?

Edy: No, I don’t think they have one, and I believe it’s probably going to be the summertime. It’s a long time for everyone waiting.