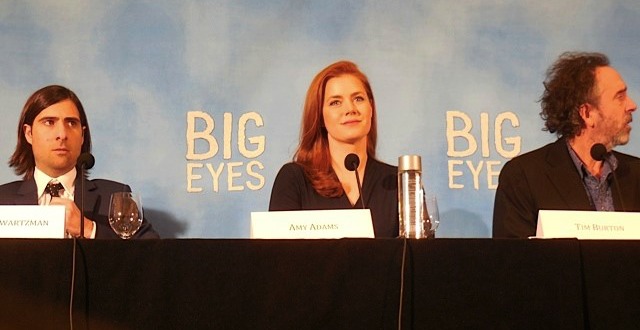 In the crush of end-of-the year Oscar hopefuls jostling for cash and glory, it would be a shame if “Big Eyes,” Tim Burton’s latest strange tale, which stars Amy Adams and Christoph Waltz, was somehow overlooked. (Released Christmas Day, as of December 29, according to Box Office Mojo, it is 15th at the box office.)

“Big Eyes” features a buzz-worthy performance by Amy Adams as artist Margaret Keane to give the actress a potential sixth Oscar nomination, while Waltz, as her huckster husband Walter, again showcases his expertise at portraying a charming villain. Both stars landed Golden Globes nominations, as did Lana Del Rey for her song of the same title as the film. Screenwriters Scott Alexander and Larry Karaszewski, who worked with Burton on Ed Wood, nabbed Independent Spirit nominations.

“Big Eyes” is about the stranger-than-fiction story of an art fraud perpetrated by Walter Keane, who signed his name and took credit for his wife Margaret’s portraits of forlorn urchins with enormous peepers that peered from walls and tchotchkes everywhere in the 60’s. You either loved or hated them. (For me it was the latter.) Everyone assumed they were the work of Walter, but they were actually created by timid Margaret, who was holed up in a small room of their spacious San Francisco home where she churned them out while Walter spectacularly mass marketed them, all before Warhol. The movie works on many levels, but particularly as a portrait of how Margaret, a single mother with few options in a sexist “Mad Men”-esque age, found her voice and regained ownership of her greatest passion, her art.

On how Tim Burton came to know the story and to direct the film, scripted in 2003 by the writing partner.

I met someone who told me the story. I knew Keane’s work because I grew up with it, but I didn’t know the true story. But I later met Margaret once when I was in San Francisco and commissioned a painting from her… Then a few years later, Scott and Larry approached me about producing the film.

What did Burton actually think of the art?

I grew up with it so it was very present. I always felt it was like suburban art. It was in people’s living rooms, in doctor’s offices, in dentist’s office, and it was culturally just very present at the time that I grew up. I like things that I find fascinating. I found them quite disturbing actually. It’s like big brother watching you these big eyes, and the polarized responses to it. Some people loved it, obviously, and some people just wanted to rip it off the walls, and so that kind of response I found quite fascinating.

Christoph Waltz on the process of trying to make Walter likable instead of just a total sociopath.

What’s not to like? I don’t get it, because if he weren’t at least somewhat likable, you wouldn’t have a story. Why would Margaret hook up with an unlikable character? Also, the story shows you to participate, in one way or another, with the development of their relationship. The relationship only makes sense when you can, to some degree, identify with it. If, for some reason, you have an unlikable person, why would you want to identify with that relationship, that story? What would you think of Margaret if she were with an unlikable person?

The pressure of market economy is something that brings out the worst in all of us. (Laughs.)

Amy Adams on what it was like playing such a subtle character in this film, especially since her last role, in “American Hustle,” was so crazy and wild. Was that part of the appeal of taking the role?

Yes, in some ways. But I didn’t really think of her as a subtle person. I just thought of her as Margaret, and that’s Margaret, so it wasn’t as though I was aiming to portray a thing. I was portraying a person and she’s a very understated human being… Her nature is very internal, so I didn’t feel as though I was portraying a thing per se, but a person.

Adams on the challenge of playing this woman who the audience meets as she’s leaving with her young daughter from her first controlling husband into a revolving door and goes into this new situation, where there’s physical abuse but mainly psychological abuse for ten years. And did she meet Margaret?

I think that it’s very common, unfortunately. Part of psychological abuse in relationships is they’re very isolating and controlling and very soon you feel very complicit to whatever that abuse is. In this case, it was a lie which she chose to be a part of. I believe even to this day she gives Walter credit, saying I wouldn’t be known if it wasn’t for him, and he was a genius at what he did, and I would never have the following I have today.

The thing that I liked about Margaret and what I thought kept her from being a victim – because I didn’t want her to seem like a victim – is when you talk to her, she does still take credit or she still takes responsibility but she feels guilty that Walter ended up the way that he did. She’s like, ‘maybe if I didn’t lie, he would not have turned out like he did.’ She really feels badly, and I liked her sense of ownership in the deception.

I knew about her art before I signed on to play her, and then I met her a couple weeks before we started filming and sat down with her for a day and we talked.

Tim Burton and whether he was drawn to Margaret’s story because of the challenges he faces in the film industry and from it being dominated by business interests.

Yes, and that’s why I also enjoyed making ‘Ed Wood.’ It wasn’t just about what Scott and Larry wrote; to me there’s a fine line between what’s perceived to be good and bad, and I’ve been through that myself with critics.

You know when they had that MoMa show (of Burton’s work) here, you know, (according to) the critics, I was about hundred times worse than Walter Keane. It got so lambasted. At the same time it had a high attendance.

I’ve experienced that kind of thing of like good and bad and the fine line between them because when you do something, you’re very passionate about it, and whether it’s like Ed Wood or the Keanes, you know, there’s such enthusiasm, as though they thought they were making a Michelangelo piece, just as Edward thought he was making ‘Star Wars’ when he was doing ‘Plan 9 From Outer Space.’ (Laughs) You understand that kind of misguided enthusiasm, and then you understand the sort of polarization of people’s responses to things.

Adams on whether Margaret was a feminist by the end of the film.

She wasn’t a part of a movement… She was just, as she puts it, ‘I was in a closet making paintings,’ so I like the way that Larry and Scott brought that into the movie because I do think whether intentional or not, she did do something that was very much of the moment in standing up for herself, and I do like that that sort of coincided with such a great portion of the feminist movement. But I’m not sure that Margaret was aware that she was doing it for that purpose, to be a voice for all women. She was really probably doing it to be a voice for the truth.