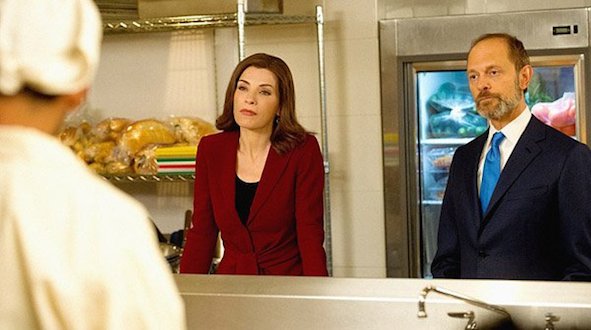 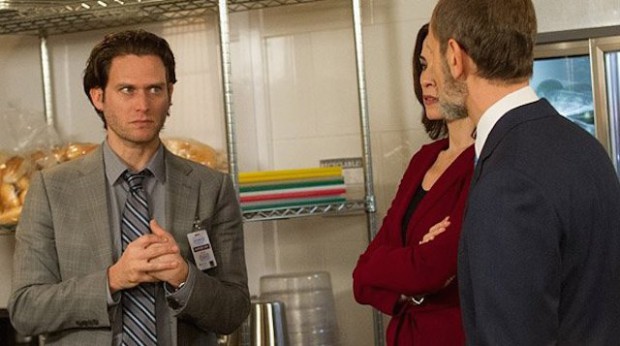 It’s another mile-a-minute, ripped-from-the-headlines episode of “The Good Wife“—yet not all of it is new. As Cary, finally free from jail and back in the Florrick-Agos-Lockhart offices for good, says, “I miss this, the same old disasters.” Apparently the writers do too, because this episode brings back old faces and rehashes a few old storylines. But Cary’s freedom means the show can focus on Alicia’s State’s Attorney race while reflecting back to real life current events. Tonight, they take on this summer’s racially charged events in Ferguson, Missouri (before the jury verdicts of November).

Among the returning characters tonight is Pastor Jeremiah (Frankie Faison), again sparring with his son Pastor Isaiah (Gbenga Akinnagbe), who hasn’t been on the show since season 2 (which I’m currently rewatching with my husband). ChumHum founder Neil Gross (John Benjamin Hickey, fresh from his stint on “Manhattan”) is back for a divorce settlement, and cunning divorce lawyer David Lee (Zach Grenier) comes back, this time on the defense, supporting Gross’s ex-wife.

Gross wants the settlement to be no more than $15 million, but one of Florrick-Agos-Lockhart’s lawyers upped it to $30 million. They go a few rounds with David, throwing around dollar amounts anywhere from 100 million back down to 15, while revealing that Mrs. ChumHum cheated on Neil with his competitor, which violates both her prenup and her non-compete clause. Eventually, she calls the ChumHum board and accuses Neil of not doing enough to stop the celebrity hackings, opening the company up for a lawsuit and forcing Neil to settle for $75 million. He gets so angry that he fires FAL. As a result, Cary and Diane decide to poach David back to the firm—and despite his laughing at them, they apparently offer him enough that he accepts.

As interesting as this all is, it’s a distraction from the primary issue here: the big State’s Attorney debate between Alicia and Frank Prady (the wonderful David Hyde Pierce). Fascinating, and so exciting, as both candidates have their teams buzzing around them because there’s so much to keep track of: what to say, how to respond to certain issues—like the impending jury verdict in the case of an unarmed black man killed at the hands of two white police officers, and potential protests happening in downtown Chicago that threaten to turn into “a full Ferguson.” Alicia also has to worry about how she looks and what she’s wearing, not to mention how to respond to family and personal matters. Yes, I’m sure Prady has to consider his looks too, but somehow I don’t think he has people fretting over which jacket or necklace (neck tie?) he should wear in quite the same way.

Alicia does not start off well in the debate. She seems distracted by a piece of scotch tape on her podium, then has a pen that doesn’t work. The ticking clock, with its strict time limit and green-when-it-should-be-red countdown throws her off, despite Josh Mariner (David Krumholtz)’s succinct warnings (“the dog ate my…blah blah”). But she gets her mojo back when she tells off a journalist (Michael Berresse, who looks like Jon Hamm) who dares to ask her about Peter’s infidelity with his legal counselor Ramona Lytton, especially while her daughter Grace is in the audience.

I thought that whole Ramona Lytton thing was already over? I thought Peter ended it months ago? He also fired her, I thought, so why are they still working together? They seem to repeat the same conversation in his car that they had then, except this time we don’t get to see it (and the way she’s touching her cheek makes me wonder if he slapped her or something). I really hate that Ramona is so stereotypical. It’s sad. This show has some of the strongest women characters in all of television, so why take the easy route with Ramona? She’s definitely not Alicia’s Mini Me anymore.

Luckily for the candidates (if no one else), a not-guilty verdict comes in and the newsfeed cuts out from the debate to cover the protests, allowing Alicia and Frank some time to eat. They bump into each other in the kitchen, without their handlers or teams, and as they realize that they’re both frustrated by the limited speaking times and both stand for the same issues, they decide to have a debate right there. No handlers, no moderator, no audience.

It’s pure Alicia and Frank on their own, one on one—and I love it. As Alicia told the reporter, they are human beings, not cartoons, and they relate to each other here, not as televised opponents, but as people. As they discuss the complicated issues, a small crowd forms around them. Eventually their handlers find them too. At first John(ny) Elfman (Alicia suddenly calls him John, which should give people a hint about the change in their relationship right away) prevents a guy from filming their interaction, blaming hotel policy, but when he realizes that Alicia’s kicking butt again, he tells him to film away. Prady’s handler busts the group up when he realizes that Alicia’s winning.

Peter, caught in a little debate of his own between pastors Isaiah and Jeremiah, tries to subdue it by inviting Isaiah with him to the protests. They meet with the widow at the center of the trial, and the three of them address the crowd. It’s a bit simplistic, but they’re able to prevent another Ferguson by pleading with the crowd to keep their protests civil and not let it escalate into a riot, despite the absent Mayor’s call to send in a heavily-armed police force.

With the riot at bay, the news sources are bored and want to go back to the debate, but Frank Prady delays it, saying they shouldn’t be debating while there are clearly bigger issues at hand. Sounds good to me, and I thought Alicia would agree, so it surprises me that she agrees to go with her team to create an oppositional press opportunity (which we don’t get to see).

Alicia takes a moment to talk to John about their big kiss last week—but of course neither will actually say what it is. Understandable, there are other people around and they certainly don’t want it to get out of hand. In fact, Alicia tries to explain to John that it didn’t mean anything, she was just in a mood, but John is clearly so uncomfortable, he can’t even look her in the eye. Funny, he talks like he’s dealt with this kind of situation before, yet he’s so awkward with Alicia. Is there really some attraction there? Alicia seems to realize it too as they’re talking, after she demands that he look at her. The tension is sliceable, and despite their trying to shut it down, it has the opposite effect. Her body woman Marissa Gold (Sarah Steele, who has the best one-liners this season) can see it from across the room.

While I love that moment and the enormous chemistry between them, it makes me sad for Finn. Is he totally out of the picture now? I can understand the writers wanting someone who looks more different from Will, but I really like Finn. Are they building a little triangle? That could be fun.

When Alicia returns to her office and discovers David Lee is a partner again, she asks Cary and Diane what happened, and why they didn’t consult with her about it. When they explain that they tried to reach her but needed to decide right away, they end up throwing back that Alicia should have consulted with them before running for State’s Attorney. They suggest that because Castro was her motivation for running, she should have pulled out of the race after he did.

Alicia accuses them of sexism, saying that if she were a man they wouldn’t demand that she drop out of the race. It’s pretty ballsy to play the sexism card here, and I don’t blame Diane for throwing it back at her. Alicia couldn’t actually think that she’d stay with the firm if she won the SA race, could she? I don’t see how that’s possible. I’m already wondering how she has enough time for all of this. Seems to me, she left Florrick-Agos-Lockhart a while ago.

That’s the tricky thing about today’s binge-watch television culture: everything moves so fast that there’s no time to really deal with the consequences. Alicia had just collaborated with Cary to leave Lockhart-Gardner and start their own firm when suddenly they’re back with Lockhart; then Alicia turns around and runs for State’s Attorney. In real life, it’s only been a year. That’s not long enough to establish a new law firm, is it?

At the very least, this argument makes Alicia realize just how important the race is to her. She wants to win. She’s determined to win. Now she might need to win, because it seems like she’s being pushed out of her firm (just as they did with Diane in earlier seasons). What goes around comes around, I guess.

How about you, good-wifers? Are you happy with the “same old disasters”? Do you think Alicia will win the race, as she’s newly determined to do? Do you think we’ll see Finn again, or is it all about Elfman now? How will Alicia work things out with Diane and Cary? Tell me your theories in the comments.