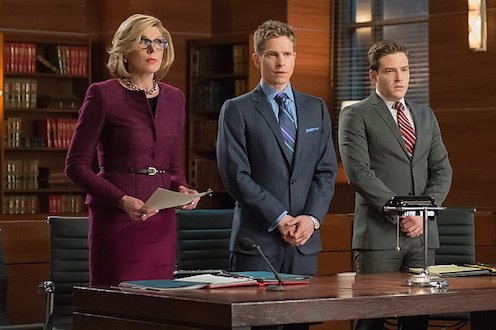 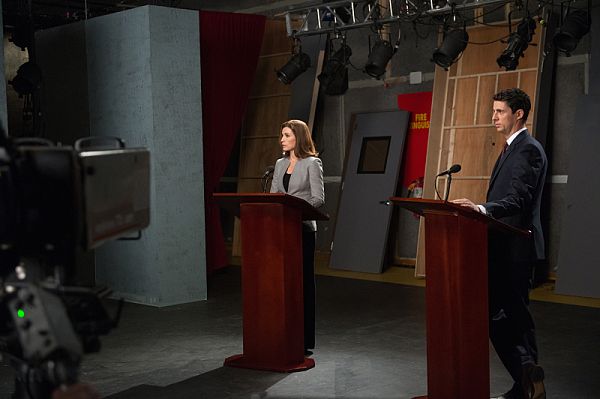 Holy smokes, good-wifers! We’re back from the holiday break with a brand new, super exciting, action-packed episode of “The Good Wife.” So much happens in the last twenty minutes alone, I’m still flabbergasted and trying to put together the pieces!

First, let’s back up. If you recall in November, Cary was forced to plead guilty to charges of helping Lemond Bishop’s lackey, the late Trey Wagner, import $1.3 million dollars of heroin into the country. SA Castro’s office had it out for Cary, forcing him to face four years of prison. Tonight’s episode starts with Alicia and Cary paying $5,000 cash to a consultant who will give Cary advice on how to survive prison.

This guy is such a stereotypical Neanderthal. He tells Cary to make a friend on the inside, a white friend who will have his back. He insists that he have sex with Kalinda so that he’ll have a memory to keep him warm over the years, but then also tells him not to trust Kalinda with power of attorney, because people change.

Cary calls Kalinda for her help in getting a friend in the clink, and Kalinda in turn asks Bishop—and discovers something better. It turns out that Trey Wagner was trying to create his own exportation (not importation) business, and the heroin Cary pled guilty to helping import had already been shipped to the United States two weeks before his fateful wiretap meeting. If the crime was already committed before Cary’s “help,” then Cary can’t be guilty of it. The Florrick-Agos team is up against the clock again, with only six hours to prove that the prosecution committed a Brady violation and withheld evidence to force Cary to plead guilty.

Alicia is unable to help Diane and Kalinda with the search, though, because Eli and Johnny Elfman are running her through a practice debate for her State’s Attorney race. In lieu of Frank Prady, they bring in Chris Elliott’s Dr. Fluke (aptly named, perhaps) as a sparring partner. He turns out to be a little too strung out on medical marijuana, so they call in Finn as a replacement. Good! I wondered how he would enter into this episode. Now the real fireworks can begin.

Problem is, Peter shows up to watch and starts correcting Finn’s comments and requesting more feedback. Finn ultimately feels like he’s intruding and excuses himself (so much for fireworks). So Eli and Johnny replace him in the debate with Peter. When Alicia kicks Peter’s butt, even bringing his past SA position into question, Johnny beams with pride, but Eli gets offended and tells them to take a break. Eli and Johnny exchange yells over the situation, with Johnny warning Eli, “don’t save your boy at my girl’s expense,” and tells him to get off of his campaign. What’s always confused me is that Eli brought in Johnny Elfman because he said he wouldn’t have time to work with Alicia, yet he’s been there for every event of her campaign so far.

During the campaign managers’ yelling match, Alicia calmly asks Peter if he’d help assure that Cary is safe (safer?) by assigning him to a minimum security prison. Peter refuses to help, telling Alicia she knows why he can’t. But then we see Judge Cuesta (David Paymer) speaking to one of Peter’s people about a potential Illinois Supreme Court position, effectively making him late for his court appointment with Diane and Cary, allowing Kalinda more time to find the proof that the prosecution played fast and loose with their evidence.

Kalinda first finds that a Toronto inspector tried to contact Detective Prima (John Ventimiglia) at the SA office to warn him about the shipment of heroin, but the metadata shows that the email went into Prima’s spam filter and was unread, and eventually deleted. A dead end. Kalinda, worried about Cary and not sure they’ll find more evidence in time, doctors the metadata to show that Prima did read the message and deleted it, implying he lied about it in court. The team continues searching and discovers that a second detective, Rodriguez (Felix Solis), was involved in the case but dismissed when he refused to play Castro’s game. Kalinda convinces Rodriguez to submit a statement that Cary was a victim of entrapment.

While Judge Cuesta is furious that Florrick-Agos tricked him into showing up late, despite Diane having no knowledge of her supposed trick, the evidence forces him to apologize to Cary and dismiss the case. Cary is free, completely, and the prison nightmare is finally over. Of course. I knew they couldn’t let him take such a huge fall, but I still feel for the poor guy. (It’s fascinating; I started rewatching the series, having finally convinced my husband to watch, and Cary is such a different character now than at the beginning.) But Rodriguez’s statement is not enough to completely free Cary so Diane still needs to rely on the doctored metadata for the case, which means that Kalinda could be in serious trouble in the future.

I suspected something like this might be the case. I’ve conjectured in the past that, since Archie Panjabi is leaving the show, the writers are not likely to kill off Kalinda like they did with Will (RIP! I’m shipping them all over again while rewatching!). I suspect they’ll have to put her in so much trouble with the law that she’ll be forced to run, or maybe serve time in prison. It looks like that’s starting to happen.

While the episode is exciting—shows like “The Good Wife” always work best when the characters fight tight deadlines—they also play haphazardly with time. For example, how did Kalinda have time to bed Cary when they need every minute to find evidence? Granted that doesn’t need to take long, but I’m sure it was at least an hour with travel time. Also, Peter refuses Alicia’s request to help Cary, but then we see Judge Cuesta in the diner with Peter’s guy. When did Peter call him, and how did that timing work? Yes, the judge was late for his court date, but it still didn’t seem like enough time. Perhaps that diner meeting wasn’t Peter’s doing, but then whose was it? It doesn’t quite add up.

Speaking of not adding up, Alicia finally finishes her mock debate, having totally decimated Peter. Walking out to her car, she gets a call from Diane, presumably telling her that Cary is now free. She’s so relieved that she lets out a big Woo! Johnny Elfman overhears it and asks if she’s ok, and she walks up to him and without saying a word, plants a huge, passionate kiss on his lips!

Whawhawhat? Where did that come from? It doesn’t make sense to me, and seems a little out of character for Alicia. Is there any future here? And what does that mean for her growing relationship with Finn? Is it somehow less of a conflict of interest for her to get involved with her campaign manager than with her former opponent? Very odd, but I guess we’ll see if anything further happens.

So what are your thoughts, good-wifers? Do you buy that kiss between Alicia and Elfman, or are you disappointed there wasn’t more between she and Finn? Are you relieved that Cary’s free, or figured they couldn’t possibly let him swing? What do you think will happen to Kalinda? Chime in in the comments.