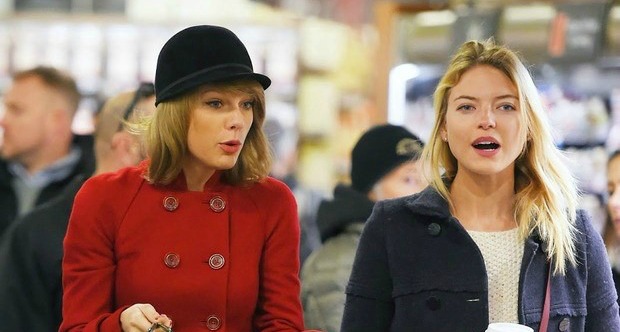 Mad love for Taylor Swift, one of my favorite young starlets, partly because she seems to have a good head on her shoulders and partly because of stuff like this.

Here she is looking adorable in a Gigi Burris Millinery’s Ana Cap while shopping at Whole Foods in New York City on January 17, 2015. (Thank you to Sydney Reising for sending the photo along!).

Taylor received the hand blocked wool felt baseball cap as a birthday present from her friend Jaime King this past December on the singer’s 25th birthday. The cap was designed by NYC based milliner Gigi Burris, who was a CFDA Vogue Fashion Fund finalist in 2014.

I love a good hat, don’t you? It harks back to the golden age of Hollywood when all the stars wore them. You can buy this one right here.

Gigi Burris Millinery was founded in 2009, on a passionate love of both headwear and unique luxury. Burris takes pride in preserving the delicate craft with her feminine yet dark aesthetic, embracing a sense of irreverence and natural elegance.

The young designer’s ongoing interest in millinery was heightened after studying at Parsons Paris and frequent visits to the old world mercerie shops there. Upon returning she studied under New York based couture milliner Leah Chalfen at Parsons School of Design and then apprenticed with Chalfen in her personal studio.

After graduating with A BFA from Parsons in May 2009, where Burris was nominated for the Designer of the Year award, her one of a kind hats and made to order ready to wear began to receive attention from the industry. Burris is only 26 years old (!), and has become increasingly well known for her intricate feather and couture handwork with leather and exotics. She currently resides in the Lower East Side of New York City.

Since the inception of her label, Burris has received numerous accolades from the industry. In 2009, the young milliners first year, she was featured in Vogue Italia’s “Young Talents” issue. Burris soon after was named one of the world’s most promising accessory designers to watch worldwide by Harpers Bazaar. Forbes most recently listed Burris alongside industry heavyweights such as Alexander Wang on the publications 30 Under 30 List in January of 2013. In July 2014 Gigi Burris was nominated as one of the ten finalists for the CFDA VOGUE FASHION FUND 2014.