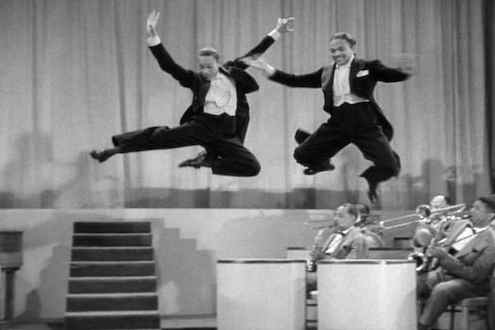 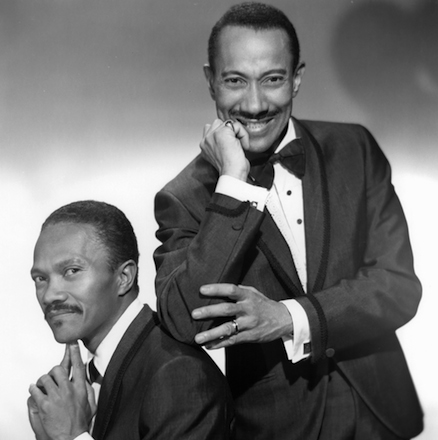 The Alex Theatre in Glendale, California, went back in time Sunday night to celebrate one of tap dancing’s greatest acts. Fayard and Harold Nicholas, better known as the Nicholas Brothers, stand for class, flash, and tremendous high energy in tap dance, with their formal tuxes, their elegant hands, and their explosive leaps and splits. As last night’s tribute reminded us, they transcended race to become two of the genre’s most-loved talents.

Last night’s tribute, written and directed by Tegan Summer (and Prospect House Entertainment) in honor of what would have been Fayard’s 100th birthday, was very much a family affair, with four generations of Nicholases in attendance. Fayard’s granddaughter Cathie Nicholas choreographed the live performances, she and her sister Nicole danced two of the numbers, their adorable children made appearances, and Fayard’s two sons, Tony and Paul, told stories of growing up with a famous father. We were treated to rare home movies and video footage, as well as some of the Brothers’ well-known dance clips.

Throughout the evening, host Stan Taffel informed the audience of the Brothers’ history, from their birth and upbringing through to their deaths (Harold in 2000 at age 79, and Fayard in 2006 at 91). The brothers, largely untrained and learning to dance from watching vaudeville acts, started performing together very young, instantly causing a sensation despite their ages and their skin color. By 1932, they were headlining acts at the Cotton Club when the elder Fayard was 18 and Harold was just 11 years old. They eventually started working in films.

The audience was treated to their first short film, “Pie Pie Blackbird,” giving us a fascinating look back at their style. They immediately have the irrepressible energy and even the split leaps they’re famous for, but they threw their upper bodies into the movements so much more, practically touching the floor with their hands at times, and not yet adapting the lifted chest and more upright style that defined them later on. It’s also clear (to this viewer, at least) that they’re probably wearing wooden taps. (Tap dancing is a partial descendent of English clogging, danced in wooden shoes, and Bill “Bojangles” Robinson, the grandfather of tap, often wore leather shoes with wooden taps).

The home movies were incredible, from footage of the young Nicholas kids dancing in a studio backlot with Fred Astaire, to the slightly older Nicholas Brothers on stage with Carmen Miranda (their co-star in “Down Argentine Way”), to Fayard goofing around with a very young Tony Nicholas. It’s great to be reminded of their singing abilities too, something they’re not really known for. We even saw some of Harold’s acting turns, including a quirky clip from the Sidney Poitier-Bill Cosby vehicle “Uptown Saturday Night” (given how much, and why, Cosby has been in the news lately, it seemed like an odd choice). A rare television clip of the Nicholas Brothers tap dancing with Michael Jackson and family, including an adorable young Janet hoofing along with the rest of them, was really something to see, despite the poor film quality.

Spread throughout the evening were live performances by Cathie and Nicole Nicholas and dancers from the Debbie Allen Dance Academy, accompanied by the Opus One Orchestra led by Chester Whitmore, who also cut a rug. Allen, Dick Van Dyke, and Desmond Richardson all left video messages in place of attending live, and Taffel conducted interviews with special guests, including choreographer and tap dubber Miriam Nelson, tap experts and friends of the brothers Rusty Frank and Richard Fox, and two African American actresses who established their own firsts in celluloid, Nichelle Nichols (Lieutenant Uhura from “Star Trek”) and Gloria Hendry (Bond Girl from “Live and Let Die”). The latter two tied into the evening’s seemingly underlying theme: black performers who transcended race to make firsts in their respective careers.

While this was certainly admirable, the evening had a messy feel. It was perhaps too jam-packed, and started at least twenty minutes late, which forced Taffel to keep things moving and cut the interviews short. The live performances, while a fun throwback to Fayard and Harold’s style, needed a little more polish (and a slightly less slippery floor), especially when compared to the brilliance of the real Nicholas Brothers; and two dramatic scenes, written by Summer based on real events in Harold’s marriage to Dorothy Dandridge, severely changed the mood of the evening, and not in a good way. Their admirable efforts to avoid hagiography aside, the latter scene depicting the dissolution of Harold’s marriage did not paint him out to be a sympathetic, or even likable, character.

But the film clips celebrating the magnificent duo is really why we came to the Alex Theatre, and it was well worth celebrating. The Nicholas Brothers’ piece de resistance, their hyper-athletic and mind-boggling stair routine from “Stormy Weather” (included below), which we got to see, some of us for the first time, and some of us again but on a 46-foot screen, was a brilliant and natural close to the evening. It fully reminded us of the absolute power of their legacy.