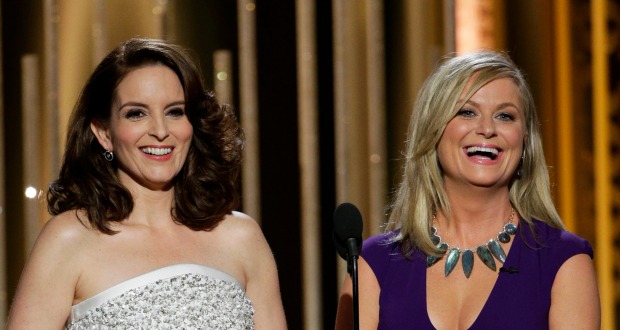 “Good evening and welcome, you bunch of despicable, spoiled, minimally-talented brats,” so began Tina Fey, with her partner in crime, Amy Poehler, as co-hosts of the Golden Globes for the third and last time Sunday night.

Nothing was off limits, including the Bill Cosby sex abuse scandal. An “Into the Woods” joke ended with the line, “Sleeping Beauty just thought she was getting coffee with Bill Cosby.” The crowd laughed uneasily. Then Poehler and Fey tried to top each other with Cosby impressions that got increasingly ridiculous until the audience was swept away and roared.

The co-hosts riffed on the Sony hacking scandal and “The Interview.” There was some funny business with Margaret Cho dressed in uniform a North Korean dictator. She insisted Meryl Streep pose with her for a photograph and the actress played along.

Naturally, the women poked fun at the celebrated A-list audience but without malice or too much snark. “One of those famous big eye paintings is on display tonight,” Poehler said in reference to the film “Big Eyes.” She said, “Check it out.” The camera panned to Emma Stone and her preternaturally large peepers. “It’s cute, but it’s creepy.”

“Patricia Arquette is here. So great in ‘Boyhood,” Fey noted. “The film proves there are still great roles for women over 40 … as long as you get hired before you’re 40.”

When Poehler gave a shout out to Frances McDormand, who looked nervous at what was next, Poehler followed with, “You are the only person I would save in a fire.” McDormand looked relieved and smiled.

“There’s Wes Anderson,” they said, as the camera fixed on  “The Grand Budapest Hotel” director. “He arrived on a bicycle made of antique tuba parts,” Poehler quipped.

All eyes were on George Clooney and his beautiful wife Amal Alamuddin, who both wore black and white Charlie Hebdo tribute buttons that read, “Je Suis Charlie.” Clooney was later to receive the Cecil B. DeMille lifetime Award for his career and his humanitarian work.

Poehler and Fey read off Alamuddin’s many impressive career accomplishments as a human rights international lawyer, including her work on the Enron case and as an advisor to Kofi Annan regarding Syria. “So tonight her husband is getting a lifetime achievement award,” Fey scoffed.

As the camera panned to the table where the cast and crew of “Selma” sat, Fey said, “The film ‘Selma’ is about the civil rights movement. That totally worked and now everything is fine.” Everyone laughed at the absurdity of the claim.

After the hosts’ 15-minute comedy opener that focused entirely on film, Poehler said, “Let’s talk about television.” Fey cut her off. “I am being told that we are running out of time. Our apologies to television.”

As it turned out, the awards that went to television were the biggest surprises of the evening. The rookie show “The Affair” was named best television drama, and Ruth Wilson won for best actress in the drama. This was a major coups for Showtime.

Jeffrey Tambor received best actor honors for television comedy for his role in “Transparent.” He dedicated his win to the transgender community. The television show from Amazon was also named best television comedy, beating out Netflix’s “Orange is the New Black.”

An overcome Gina Rodriguez was named best actress, television comedy, for “Jane the Virgin,” the first time ever the CW channel was nominated for a Golden Globe. Rodriguez thanked Les Moonves before she thanked CW’s Mark Pedowitz, as the camera panned to the CBS CEO who beamed. “This award is so much more than myself. It represents a culture that wants to see themselves as heroes,” Rodriguez said.

Kevin Spacey won for best actor in a television drama for his portrayal of Frank Underwood in the Netflix hit “House of Cards.” He kissed his co-star Robin Wright before he took to the stage and uttered, “This is the eighth time I’ve been nominated. I can’t f–king believe I won.” He was bleeped several times during his speech.

A subdued Prince showed up to announce the nominees for best original song for a motion picture. The award went to Common and John Legend for their gorgeous, tune “Glory,” from the movie “Selma.”

In his acceptance speech, Common said, “I want to thank God and the Hollywood Foreign Press,” getting huge laughter for mentioning both in the same sentence. “I felt this was bigger than a movie,” said the rapper-songwriter, adding, “I am the unarmed black kid who maybe needed a hand, but instead was given a bullet. I am the two fallen police officers fallen in the line of duty. ‘Selma’ has awoken my humanity. Now is the time to change the world. ‘Selma’ is now.’” This sadly was the only win for Ava DuVernay’s Martin Luther King Jr. historical drama.

Winners in the acting categories for motion picture were predictable. In a repeat of the New York Film Critics Circle Awards last week, both Patricia Arquette and J.K. Simmons picked up best supporting acting wins.

“I’m the only nerd with a piece of paper,” said Patricia Arquette, as she put on her glasses and read her acceptance speech, which hewed closely to the one she gave to the New York Film critics last week. “Many thanks to our visionary director,” Arquette said and his gift of the role of Olivia, “an under-appreciated single mother. Thanks for shining a light on the millions of women like her, including my mother.”

Amy Adams was named best actress in a comedy or musical for “Big Eyes.” This was her second Golden Globe win in a row, after winning the trophy last year for her role in “American Hustle.”

Michael Keaton won in this same category for “Birdman,” and thanked director Alejandro Gonzalez Inarritu. “Alejandro, there’s not a person in this room who would not show up for your next gig.”

He added, “My name’s Michael John Douglas, I’m from Forest Grove, Pennsylvania … And I don’t ever remember a time when my father wasn’t working two jobs … took care of seven kids …my mother volunteered … I’ve got six wonderful brothers and sisters … I have some tremendous loving and generous friends.” Keaton choked up when he talked about his “best friend,” who was “kind, considerate and thoughtful,” and who turned out to be his son, who “I love with all my heart. This is for all of them.” He ended by saying “You have no idea what this means to me. I’m extremely grateful.”

Eddie Redmayne was named best actor in a drama for “The Theory of Everything.” Redmayne kissed his new wife Hannah, and then his co-star Felicity Jones, before he took to the stage. As he thanked his wife, he mentioned he cut short their honeymoon to be at the Globes. “I promised her the sunshine. It wasn’t so great today,” he laughed. But this is “a night at the end of our honeymoon we’ll always remember.”

Keaton and Redmayne are now head to head in the Oscar race, with Redmayne having a slight edge.

Julianne Moore unsurprisingly won best actress honors for “Still Alice.” (She was also up for best supporting actress for “Maps to the Stars,” the David Cronenberg film that screened at the New York Film Festival.)

READ: Julianne Moore Shines at NYFF Screening of Cronenberg’s ‘Maps to the Stars’

“Wow! I love you, foreign press,” said the giddy Moore. Then she touched on the difficulties of getting the film made. Moore mentioned that Lisa Genova, who wrote the book of the same name on which the film is based, told her, “No one wants to see a movie about a middle-aged woman.”

Clooney injected both a romantic and political note to his acceptance speech for the Cecil De Mille Award, presented to him by Julianna Margulies and Don Cheadle, who both joked about not getting invited to his wedding.

Referring to his humanitarian work, Margulies asked Cheadle, “Has he ever asked you to tour a disaster area?” Cheadle: “I was on the set of ‘Monuments Men.’” (Cheadle called out to Clooney, “I didn’t write that George. We’ll talk later.”)

Clooney gave a gracious speech, in which he mentioned he couldn’t remember the actors who won Globes in previous years, but remembered instead their words and their presence in movies he loved. “I don’t remember what hardware Robin Williams took home,” he said. “I just remember carpe diem, make your lives extraordinary,” citing a famous line from the Robin Williams film, “Dead Poets Society.”

Clooney went on to say, “I’ve had a petty good year myself. Amal, whatever alchemy it is that brought us together, I couldn’t be more proud of you, honey.” Then Clooney, who has done much good humanitarian work in Darfur and the Sudan said, “Just to reiterate what we’ve all been talking about, today was an extraordinary day. There were millions of people who marched not just in Paris but around the world. And they were Christians, Jews and Muslims. And they were leaders from countries around the world, and they didn’t march in protest. They marched in support of the idea that we will not walk in fear. We won’t do it. So, je suis Charlie”

Wes Anderson’s terrific film “The Grand Budapest Hotel,” was named best motion picture, comedy or musical. In his acceptance speech, Anderson said he would not thank his cast – then rattled off their names anyway – but rather that he would thank the Hollywood Foreign Press, and then Anderson read off their names, which were at least as exotic and possibly comical as those of the characters in his film.

But the big Golden Globe winner was Richard Linklater. “Boyhood” received top honors as best film, drama and Linklater was named best director. “This was a very personal film for me, but it became personal to everybody who worked on it,” said the director.

The camera panned to Patricia Arquette who grabbed Ethan Hawke’s hand. The director dedicated his Golden Globe award to his parents, “who gave me so much love and support” and to “families just passing through this world and doing their best.” He added, “We’re all flawed in this world. No one’s perfect.”

Check out the complete list of winners below the photo gallery of the Warner Bros./InStyle AfterParty. Photos courtesy of and used with permission of Slate PR.