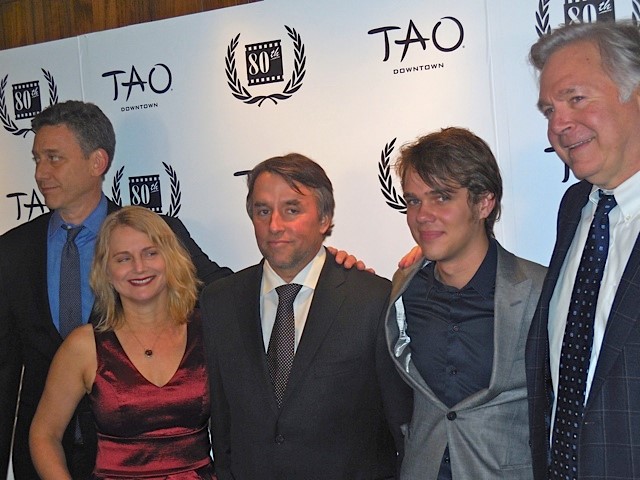 Richard Linklater, the director of “Boyhood,” was the big winner at The New York Film Critics Circle Awards that took place Monday night at Tao in the trendy Meatpacking District.

There was no suspense. The NYFCC announced the winners a month ago, so all they had to do was show up and give speeches. For some of them it meant a chance to practice their acceptance speeches for upcoming awards shows and possibly the big one, the Oscars.

A highlight of the evening, which was relatively sedate compared to the brouhaha of last year, were the surprise appearances of A-listers who were presenters and guests, including Jon Stewart, Jake Gyllenhaal, Kyra Sedgwick, Bob Balaban, Bill Murray, Maggie Gyllenhaal, Peter Sarsgaard, John Lithgow, Jon Stewart and Rose McGowan.

A gorgeous Marion Cotillard provided Hollywood glamour to an event where the lowly press can mingle with movie stars without fear of security guards or publicists blocking them.

Everyone who took the podium had a chance to poke fun at critics for a change and joke about their most spectacularly bad reviews. In presenting the best director award, Ethan Hawke recalled what critic Manohla Dargis wrote of his performance in “The Newton Boys,” Linklater’s 1998 film and their second collaboration: “Richard Linklater seems to achieve the impossible: He makes Ethan Hawke bearable.”

In receiving his directing award, Linklater noted, “I’m having quite a New York moment here” and went on to dedicate the award to the New York critic who “has had the most profound effect on me, and that would be George Morris,” who he got to know in the last five years of his life. “George was the first adult I met who lived for cinema.”

Stewart, who is a first-time director with “Rosewater,” sat at the “Boyhood” table and handed out the ultimate prize for best feature film prize. “Why am I here?” he asked from the podium. “Because when you win this many awards, you quickly run out of people to present to you.”

In paying tribute to “Boyhood,” which he called “transcendent,” Stewart noted that “you know how the story ends and the kids don’t. They’re uninhibited, affectionate and enthusiastic, and we know they become, you know, us. And that’s heartbreaking.”

In turn, Linklater joked he wanted to give Stewart an award for “best first feature for a director over 50. Oh wait! The guy who did ‘Nightcrawler’ is over 50. Okay, one of the best films by a director over 50.” Linklater went on to thank his producers — John Sloss, Cathleen Sutherland and Jonathan Sehring — who helped keep the movie rolling over the 12 years it was filmed.

Patricia Arquette, so terrific in “Boyhood” as a very believable mother, flawed and loving, who makes bad choices in her men but always does the best for her kids, received the supporting actress honor, although I think she really belongs in the best actress category. Ellar Coltrane, the central character of “Boyhood,” presented her with the prize, a certificate that looks like a high school diploma.

Earlier in the evening, I was on the red carpet, where I spoke to Damien Chazelle, the writer-director of “Whiplash.” JK Simmons, who stars in the film with Miles Teller, received the best supporting actor honor later in the evening. It turns out that Chazelle had reservations about Simmons co-starring opposite Miles as the abusive and sadistic teacher because of his size. He’s way smaller than Teller who towers over him.

“I was really worried about that because I knew I really wanted Miles as well,” Chazelle told me. “But it’s not about the height. It becomes about the posture and how their faces read and you just feel that Miles is scared of J.K. It’s just such an interesting testament to their acting.”

I wondered if Miles ever had enough and whacked JK back. “The funny thing is every time we would finish a take, they’d start laughing,” Chazelle told me, adding that his next film, which he will begin shooting in the fall, again stars Teller, this time as a jazz pianist. He said it was going to be a “full fledged musical.”

Christopher Miller and Phil Lord, the adorable writer-directors of “The LEGO Movie,” which the New York Critics named best animated film, told me on the red carpet it was good to bask in the love of the critics, “96 percent of them. The other four percent agree to disagree,” Miller told me, referring to their entry on Rotten Tomatoes.

Linklater, who’s always charming and talkative with the press, told me he’s still “processing” all the positive reaction and awards attention the film has received. “The response has been so kind of heartfelt, what we’ve put out in the world, what we’ve gotten back is so kind of wonderful and sincere that the film’s having a great afterlife, continuation.”

When I spoke to Patricia Arquette about the scarcity of three-dimensional roles for women, she told me, “There’s so much that pisses me off about the inequality between men and women. We still don’t have equal rights in America. As far as movies go, there are very few filmmakers like Rick. Ethan often says, ‘I’ve seen this woman a lot in life but not in movies.’”

She added, “I hope more filmmakers open up to that, those stories, those stories of women, that more women start writing, more women start directing. We’re going to have to keep pushing through. Even with that celebrity hack situation, you saw these actresses were getting paid drastically less than their male counterparts, and it’s really time for that to change. It causes a huge impact on all these children that are being raised in these single family households.”

The very down to earth Brit treasure Timothy Spall, who arrived first on the red carpet so he could speak to all of the press, then nipped out for a Q&A but returned in time for the reception. Before the awards ceremony, during the reception, he told me of all the hoopla, “I’m not used to it because I’m not a habitue of this type of thing by dint of the fact that I often don’t win, so to be here and to be getting an award is a bloody treat I’ll tell you.”

He added, “I didn’t have to come here a winner and leave a loser, so that’s very nice. When you get nominated, sometimes you sit there thinking, ‘ah, this is all very nice’ and then you go home feelin’ like you’ve done something wrong if you don’t win it,” he laughed.

Lithgow presented Spall with his prize, admitting he only met Spall once previously and that was in an elevator where he did all the talking. Then he read off a litany of praises for the Brit treasure by fellow actors before the “Turner” actor took the stage. Spall looked at his phone for his acceptance speech and then realized he had the wrong phone. He accidentally left his prepared speech on his wife’s cellphone but winged his speech beautifully.

“In your career – it’s been a long one – I’ve been very lucky. You get a lot of kicks in the arse and sometimes you don’t work. And that’s worse than being ignored, you know? It is being ignored. “It’s really weird f…ing luck to get an award.”