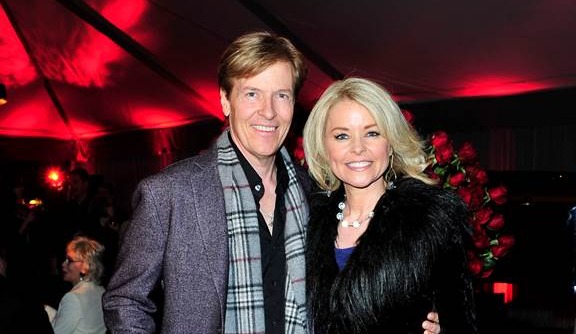 If you grew up in the 1980’s, most likely you spent a few hours watching “General Hospital” or other soap operas after school. Back then cable wasn’t prevalent and there were a limited number of channels available.

“General Hospital” introduced us to John Stamos, and it seemed everyone watched the wedding of Luke and Laura. The mid ’80’s also introduced us to future supercouple Frisco (Jack Wagner) and Felicia (Kristina Wagner – though back then she was Kristina Malandro). Felicia, disguised as a boy, was in Port Charles to steal back an Aztec ring that Frisco had recently purchased. Upon discovering she was not a boy, Frisco found himself attracted to her. Through the typical menagerie of soap opera roadblocks (evil fiance, other interested parties, etc.) the two finally found love and each other.

Of course, it is soap-opera-land and the two don’t remain together for very long. Not so much for the stars who played Frisco and Felicia. After years of dating, Jack and Kristina finally married in real life and have two kids. Even though they eventually divorced, the two remain friends and co-parents.

Jack landed a recurring role on Hallmark Channel’s “When Calls the Heart” last season as forensic inspector Bill Avery (think of his role as “Little House on the Prairie” meets “CSI”). The show has already commenced principal photography on Season 2, and it was announced that Kristina Wagner would be joining the cast. So Frisco and Felicia fans can rejoice! Sort of.

Her role seems to be clouded in mystery. Will she play a city friend of Elizabeth’s? A former (or maybe current) paramour of Avery’s (though Avery has been sweet on Lori Loughlin’s character, Abigail, since he arrived in town)? Or maybe an acting buddy of Rosemary – Jack’s former fiancee and current thorn in Elizabeth’s side?

In the exciting return to Coal Valley — “When Calls the Heart” Season 2 — Elizabeth and Jack are closer than ever after their first kiss, but their budding union barely has time to begin when Elizabeth receives a distressing telegram from home requesting her return. As Jack gains a new understanding of Elizabeth’s high-society family life, Abigail remains in Coal Valley where she nervously awaits the mining disaster trial, and finally confronts investigator Bill Avery about a shocking discovery that could put their own romantic future on hold.

Jack teased Frisco & Felicia fans (there are still a lot of them out there!) with this tweet from the Hallmark Channel’s Winter TCA party:

Then later showed proof they were working together with this tweet:

Our 1st day working on #WCTH, grateful & having fun, sending our lv 2all pic.twitter.com/L5T2XdkXbJ

Are you excited about the reunion of Jack and Kristina Wagner on “When Calls the Heart”? Sound off below!