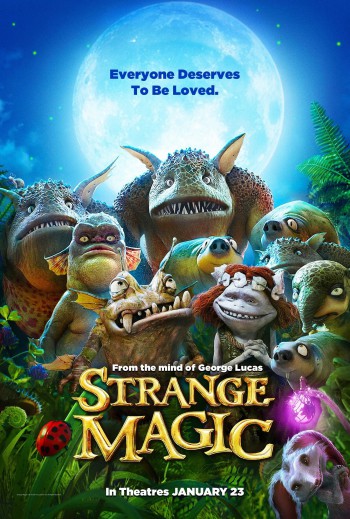 New movies in theaters this week feature a colorful cast of goblins, elves and fairies in “Strange Magic”; Johnny Depp as a debonair art dealer in “Mortdecai”; and Jennifer Lopez in a scary situation with “The Boy Next Door.” Here’s a sneak peek at what’s opening wide in theaters this week.

Inspired by Shakespeare’s “A Midsummer Night’s Dream,” this madcap musical fairy tale features popular songs from the past six decades to help tell the tale of a colorful cast of goblins, elves, fairies and imps, and their hilarious misadventures sparked by the battle over a powerful potion.

Juggling angry Russians, the British MI5, his impossibly leggy wife and an international terrorist, debonair art dealer and part time rogue Charlie Mortdecai (Johnny Depp) must traverse the globe armed only with his good looks and special charm in a race to recover a stolen painting rumored to contain the code to a lost bank account filled with Nazi gold.

THE BOY NEXT DOOR

When a handsome, charming teenager named Noah (Ryan Guzman) moves in next door, newly separated high school teacher Claire Peterson (Jennifer Lopez) encourages his friendship and engages in a bit of harmless — or so she thinks — flirtation.

Although Noah spends much of the time hanging out with Claire’s son, the teen’s attraction to her is palpable. One night, Claire gives in to temptation and lets Noah seduce her — but when she tries to end the relationship, he turns violent.